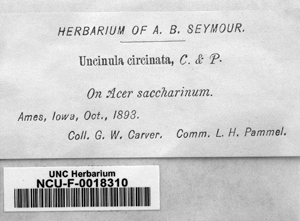 My daughters claim there are no famous botanists. I have tried to refute this claim, but never to their satisfaction.

“How about Linneaus?” I say.

“Okay, how about Darwin?”

“Normal people do not know about him either except that he has something to do with evolution.”

At the end of January, while databasing our micro-fungi collection, I found some specimens collected by a botanist whom even normal people should have at least heard of: George Washington Carver.

I thought it was especially fitting that we should discover that the Herbarium has at least nine specimens collected by Dr. Carver just as Black History Month commences.

Mark Elliott, curatorial assistant at University of Florida, first noted specimens in our collection as he made digital images of the labels.

“I just noticed a specimen collected by G. W. Carver in your collection,” he emailed, “do you think this could be THE George Washington Carver?”

I was skeptical. The specimen was from Ames, Iowa, and I associated Carver with the Tuskegee Institute in Alabama. All I could recall about Carver’s life was that he was born into slavery, encouraged farmers to plant peanuts, and developed hundreds of uses for peanuts.

I consulted Wikipedia’s entry for George Washington Carver and learned that he was the first African American student at Iowa State Agricultural College (now Iowa State University) in Ames, Iowa. The fungal specimens discovered thus far in the University of North Carolina Herbarium’s collection all date from 1893, in the middle of Carver’s time as an undergraduate. Many of our specimens have the notation “Comm. L. H. Pammel” on the label, meaning they were sent by Louis H. Pammel to Arthur Bliss Seymour, for inclusion in Seymour’s herbarium. Again, Wikipedia provided the information that Pammel advised Carver for his master’s degree on plant pathology and mycology. Carver went on to become the first African American faculty member at Iowa State. In 1896, Booker T. Washington, the president of Tuskegee Institute, convinced Carver to join its faculty. Carver taught at Tuskegee for 47 years. “He taught methods of crop rotation, introduced several alternative cash crops [peanuts, soy beans and sweet potatoes] for farmers that would also improve the soil of areas heavily cultivated in cotton, initiated research into crop products (chemurgy), and taught generations of black students farming techniques for self-sufficiency.” 1

By the beginning of February, we have catalogued only about 2,500 of our estimated 17,000 micro-fungi. I hope to discover more specimens collected by George Washington Carver… perhaps even a fungus that he collected from a peanut plant.