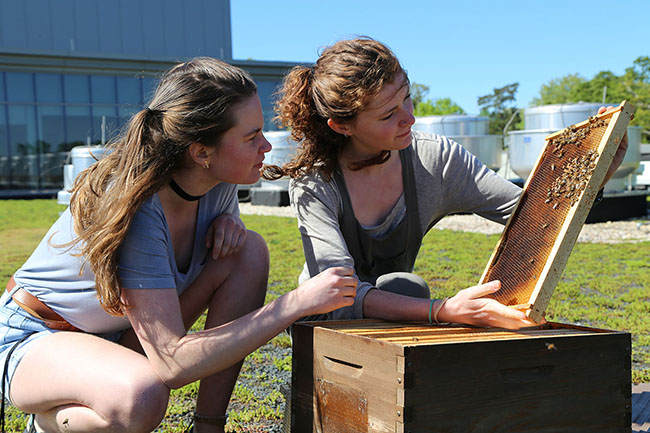 It began nearly two years ago with a cluster of hungry honeybees swirling around a campus trash can.

That sight reminded Bryn Walker, then a first-year student, that she had intended to look into Carolina’s Beekeeping Club, one of the University’s 800 student organizations, even before she arrived on campus.

“It’s something I had never explored before coming here, and I thought it sounded interesting,” she said, “but I got so busy once I was on campus that I had forgotten about the club.”

As a result of that aha moment on a fall day in 2017, Walker became actively involved in the club and gained an appreciation of the environmental importance of beekeeping. In the process, she also found a meaningful place for herself on a large campus.

Ultimately, that experience led to Carolina being named a Bee Campus USA affiliate this spring.

The distinction, given by the international nonprofit Xerces Society for Invertebrate Conservation, recognizes the collective strength of educational campuses nationwide to benefit pollinators. Carolina has joined more than 60 U.S. campuses working to improve their ornamental landscapes to sustain pollinators.

Read more in the University Gazette…