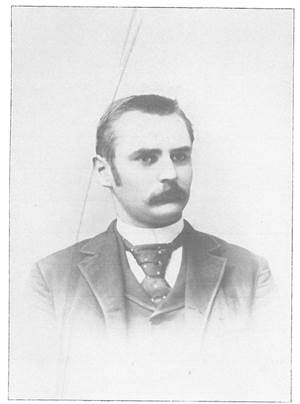 The University of North Carolina Herbarium has catalogued about 60 specimens collected by Frederick William Anderson.  All were collected between 1887 and 1888, and bear the printed label “PARASITIC FUNGI OF MONTANA” to which Anderson added hand-written notes on taxon, date, locality, etc.  He consistently signed his labels “F. W. Anderson.”  It is very likely more specimens collected by Anderson will be found as we continue to catalog our collection of microfungi.  NCU’s macro- and microfungi are catalogued and searchable at mycoportal.org.

Many Anderson specimens curated by NCU were collected at Deer Lodge, Montana.  In 1890 Anderson was awarded an honorary Doctor of Science degree by the College of Montana, a private liberal arts college in Deer Lodge founded in 1878.  “Strapped for funding and suffering from a limited enrollment, the school had an erratic existence and finally closed for good in 1916…Buildings from the former College of Montana campus still survive in Deer Lodge, including Trask Hall, which is listed on the National Register of Historic Places.”1

This rising young botanist died in New York city on Dec. 22, 1891 from an abscess on the brain. He was especially known as an independent and indefatigable worker upon our Montana flora. Gone is he, no more to roam with me our Montana plains, no more to climb these mountains, no more to sit beside me in my study gazing through my microscope to discover Nature’s secrets, no more to use his skillful pencil in catching up on paper the singular beauties of plant structure; gone while we are mutually planning for many more years of service together in our beloved science; gone, adding one more to the mysteries of divine providence which so often removes those that seem indispensable.

He was born at Wisbech, Eng. [England], June 22, 1866.  In 1881 the family removed to Chicago and in 1883 he came to Montana and began his brief but brilliant career in the study of Montana flora. In 1888 he met at Great Falls, Montana, Hon. N .J. Colman, the United States Commissioner of Agriculture.  At the same time also he met the then editor of American Agriculturalist, the Hon. Mr. Martin, who became so attached to him that the love became as a father for a son. From this time Mr. Anderson’s life was spent in Washington, at Newfield, N.J. [New Jersey], with Mr. J. B. Ellis, or at New York at work upon the Agriculturalist.  He was beginning to publish botanical articles quite largely and venture upon revisions and descriptions of new species.

Mr. Anderson was an example of what can be accomplished by a man of one idea. From earliest childhood he manifested a liking for scientific pursuits. For the love of botany he surrendered in later years all thought of ease, wealth or comfort. It was heaven for him to botany eyes; woe was it for him to be forced to do anything else.

His honored father who survives him is a clergyman, and, like all clergymen, knows what a perplexing problem it often is to make the unknown “x” in the yearly equation a plus quantity. Of course, his son Fred was too much of a man to allow himself to be a burden upon the struggling father. Hence he often endured poverty rather than give up his botanical investigations.

His energy was intense, and in the freedom of my intimate relationship with him I dubbed him my “night owl”; many a time forcing him to rest long before he himself would have surrendered to sleep.

The College of Montana at Deer Lodge in June, 1890, conferred upon him the degree of Doctor of Science, in acknowledgment of his valuable services in investigating the floor of our state. This was in honor of which he knew nothing until it was thrust upon him.

The ethical culture department at Washington, through Mr. Galloway and Mr. Martin, put him at one time to active service at Washington where he remained until he entered the service of Mr. J. B. Ellis, the distinguished mycologist, of whom Mr. Anderson published a biographical sketch in the GAZETTE for October, 1890.  He was engaged while at Newfield in making the microscopical drawings for Mr. Ellis for his forthcoming work on the “North American Pyrenomycetes.”  Upon completing his work for Mr. Ellis he was engaged upon the editorial force of the American Agriculturalist at New York. Upon taking up his permanent residence at New York, he was elected to membership in the Torrey Botanical Club whose meetings were to him a constant delight. At this time he published jointly with myself a pamphlet entitled: “Common and Conspicuous Algae of Montana.”  This was a reprint from the Bulletin of the Torrey Botanical Club.

He began his botanical publications by sending to the BOTANICAL GAZETTE’s short field notes and observations from Montana, and later published observations upon our Montana fungi. His articles have most of them been short and crisp, giving promise of far greater effort in the near future. He was especially skillful in drawing and was at the time of his death engaged upon drawings for Mrs. E. G. Britton’s proposed work on the mosses of the Northeastern United States.  In Dr. Geo. Vasey’s “Report of the botanist” for 1888 is incorporated a very valuable essay of fourteen octavo pages on the pastoral resources of Montana by Mr. Anderson. It does not pretend to be a complete list of forage plants in Montana, but it does describe well be usual and profitable forage of this country. He had a remarkable talent for making such a list very interesting reading even for the unprofessional. In the same report can be seen three of his drawings, viz:  Plantago patagonica var. gnaphalioides; Lygodesmia juncea; and Solanum triflorum.

Two things he loved with great enthusiasm, good books and botanical novelties. For the books I have seen him spend every cent he possessed; for the other no mountain was too steep, no distance too great, no weariness to distressing for him to endure, that he might lay his hands upon a new flower or grasp a new fungus.  He seemed to know by instinct where to find a treasure. The inspiration of his botanical knowledge was intensified by the fact that he gained his knowledge at first hand. He knew whereof he spoke or wrote. Moreover he was a close observer of nature and a diligent collector.

His friendships were keen and constant; slow to form and affection, but once formed they were warm and enduring. He sought his friendship among the good, the diligent and the lovers of nature. By us who knew him best his loss is most keenly felt, and the botanical world is the loser not only of the talent he had exhibited, but, prospectively, of the greater things which his short career promised.