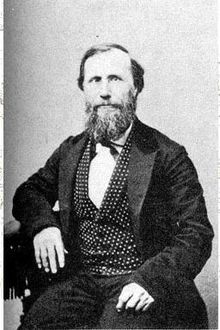 “As a careful and indefatigable explorer and collector, and also an acute observer, he merits the highest praise,and will be long and honorably remembered for his great services to his chosen science.”6

The University of North Carolina at Chapel Hill Herbarium (NCU) has cataloged about two dozen fungal specimens (all micro-fungi) and several vascular plant specimens collected by Charles Wright. As our collections continue to be cataloged, it is likely that more specimens collected by him will be found. It is possible that NCU also has macrofungi collected by Charles Wright from his explorations in Cuba, but these specimens only have the collector’s surname and are not dated.  Thanks to grants from the National Science Foundation, all the mycological collections at NCU are searchable via www.mycoportal.org and our vascular plants are searchable via www.sernecportal.org

Charles Wright was born in Wethersfield, Connecticut.  While as an undergraduate at Yale (1831-1835) he developed an interest in botany.  He taught school for a year in Natchez, Mississippi, then in 1837 moved to Texas where he taught, did survey work, and botanized.  He had a life-long botanical relationship with Asa Gray, botanist at Harvard, and Wright sent many of the plants he collected to Gray.1

“In 1849, he joined an army expedition (with [Asa] Gray’s help) through Texas, botanizing from Galveston to San Antonio and then on to El Paso.”2

“When Col. J. D. Graham was commissioned by the United States to establish a boundary line between the United States and Mexico, in 1851, Wright was appointed Official Surveyor and Botanist.”1  The United States and Mexican Boundary Survey (1848-1855) was charged with determining the boundary between the US and Mexico as defined in the Treaty of Guadalupe Hidalgo at the conclusion of the Mexican-American War.  “In addition to its documentation of the new boundary, the survey report was notable for its natural history content, including paleontology, botany, ichthyology, ornithology and mammology.”3  Upon his return home in 1852 he presented his collection to Harvard College.”1

“Between 1853 and 1856, [Charles Wright] took part in the Rodgers-Ringgold North Pacific Exploring and Surveying Expedition, collecting plants in Madeira, Cape Verde, Cape Town [South Africa], Sydney [Australia], Hong Kong [China], the Bonin Islands, Japan (at Hakodate, Tangeshima, the Bonin Islands and the Ryukyu Islands including Okinawa) and the western side of the Bering Strait… Wright left the expedition at San Francisco in February 1856 and went south to Nicaragua…Between 1856 to 1867 he led a scientific expedition to Cuba…In 1871 he went…to Santo Domingo.”2

Charles Wright returned to Wethersfield, Connecticut after the trip to Santo Domingo.

“[Charles Wright] spent the last 13-14 years of his life tending the family property in Wethersfield.  He did, however, spend short periods of that time at Harvard, one such being the six months of 1875-1876 that he spent as acting librarian of the Bussey Institution.”5

Benjamin Bussey (1759-1842) created an endowment at Harvard for the establishment of an undergraduate school of agriculture and horticulture to be called the Bussey Institution.  Also included in his 1835 will was the grant of his estate, “Woodland Hill” in Jamaica Plain, Massachusetts to the President and Fellows of Harvard College which would be the site of the school… Enrollment in the program was never very large, averaging about eight students during the years 1880-1895, and only ten undergraduate degrees were ever granted…In 1930, the Bussey faculty was merged with the faculty of Arts and Sciences and in 1936 the Bussey staff was transferred to the Biological Laboratories in Cambridge.  The Bussey Institution remained as a holding agency and its funds were used to support the Arnold Arboretum… The histories of the Bussey Institution and the Arnold Arboretum are often intertwined.  The Arboretum was established on what had been Bussey Institution land, and at different periods the two institutions shared staff, including administrators, and facilities.”4

Charles Wright Elementary School in Wethersfield, Connecticut is named in his honor.5

PUBLICATIONS by (or about) Wright’s collections:

Gray, Asa.  1852.  Plantae Wrightianae Texano – Neo-Mexicanae:  An account of a collection of plants made by Charles Wright, A. M. in an expedition from Texas to New Mexico in the summer and autumn of 1849, with critical notices and characters of other new or interesting plants from adjacent regions, etc. Smithsonian Institution, Washington, D.C.

Special thanks to Martha Smart, Research Librarian, Wetherfield Historical Society for assistance with information for this post.