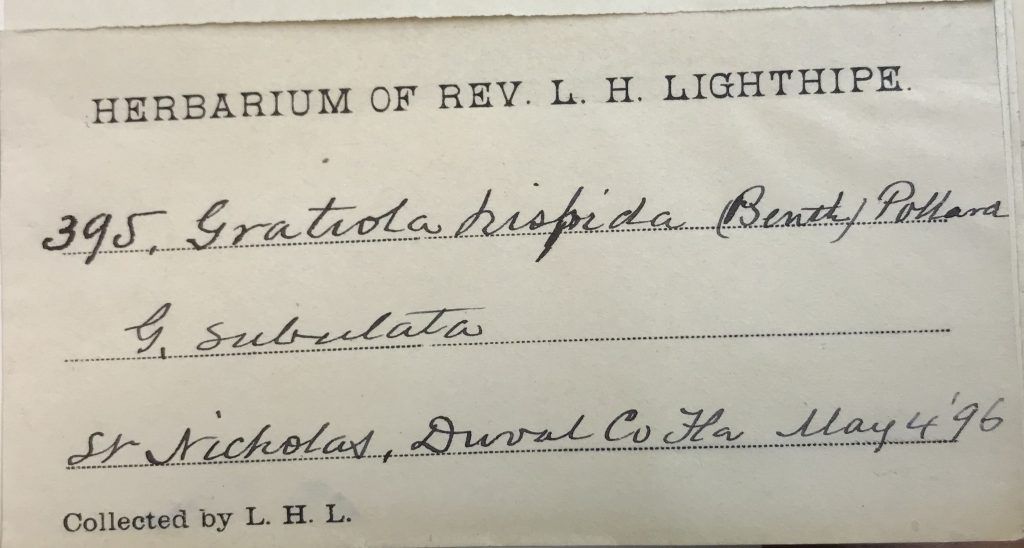 The University of North Carolina at Chapel Hill Herbarium (NCU) has cataloged approximately 60 specimens collected by Lewis Henry Lighthipe.  Of those, about 2/3 are from Florida and about 1/3 from New Jersey, particularly the Pine Barrens region of that state.  Most specimens at NCU have a pre-printed label entitled “HERBARIUM OF REV. L. H. LIGHTHIPE” and are signed simply “L.H.L.”.

It seems that Rev. Lighthipe was interested in many aspects of natural history.  He collected lichens and bryophytes in Florida and New Jersey (see bryophyteportal.org and lichenportal.org for these specimens).  A fossil turtle, Erquelinnesia molaria Hay which Lighthipe collected in Birmingham, Burlington County, New Jersey is curated by the Philadelphia Academy of Sciences. (1)

John Kunkel Small (1869-1938), botanist at the New York Botanical Garden, named Phlox lighthipei in honor of Rev. Lighthipe.  This wildflower is found in pinelands of Florida, Georgia, and South Carolina. There is a single record of Phlox lighthipei from Corundum Knob in Clay County, North Carolina collected by J. Dan Pittillo, Gary Kauffman, Alan S. Weakley, and Mike Schafale in 1994; this specimen is curated by Western Carolina University Herbarium (WCUH).

Lewis Henry Lighthipe was born at Orange, New Jersey, 24 January 1843. He graduated from Columbia University in 1863, and from the General Theological Seminary, New York City, in 1866, receiving his master’s degree from Columbia in the same year. He at once entered the ministry of the Protestant Episcopal church, being ordained in 1866 by W. H. Odenheimer, bishop of New Jersey. His clerical career was chiefly in the states of New York and New Jersey, but from 1894 to 1899 he was located at South Jacksonville, Florida.

Mr. Lighthipe was an enthusiastic amateur botanist. He became a corresponding member of the Torrey Botanical Club in 1885, and was elected an active member 8 February 1887. He was notably faithful in his devotion to the interests of the Club, attending the meetings with much regularity until the infirmities of advancing age made it necessary for him to give up the trips from his New Jersey home, and finally led him to resign. His resignation was accepted 13 January 1920, and the minutes record the fact that “in recognition of his thirty-four years of faithful service to the Club, it was voted to transfer his name to the list of corresponding members.”

He was a charming man and a pleasing speaker, but so modest and unassuming that his name rarely appeared as a botanical writer. The only scientific paper with his name as author seems to be one of a single page, entitled “Notes on the New Jersey flora,” published in the Bulletin of the Torrey Botanical Club for January 1886; but his name appears frequently in the minutes of the Club in connection with brief notes, and at the meeting of 14 April 1903 he presented a paper on “The flora of the pine barrens of New Jersey,” of which the abstract (in Torreya) occupies two printed pages. Many specimens, from New Jersey and Long Island, collected by him are no in the Local Flora herbarium, and he collected plants also during his residence in Florida. His personal herbarium of about 7000 specimens was sold in 1920 to the Brooklyn Botanic Garden.

Trinity Episcopal Church on Mill Street in Vincentown, Burlington County, New Jersey, was one of Rev. Lighthipe’s postings.  Vincentown is on the edge of the New Jersey Pine Barrens, a favorite botanical collecting area for Lighthipe.  “The cornerstone of [Trinity Episcopal] church was laid on September 27, 1871 by a Bishop Oldenheimer and the church had its first service on June 2, 1872.  The Rev. Lewis H. Lighthipe was the first vicar… The parish was officially organized April 14, 1873.  In records written the day after Easter that year, Rev. Lighthipe wrote, “At this time, there are twenty-seven families, eighty seven individuals, eighteen communicants and thirty-one people in Sunday School.” (3)  Lighthipes’ tenure at Trinity was long, but not without controversy.

New Experience for an Old Church (1895 December 24)  The New York Times
NEW-BRUNSWICK, N.J., Dec. 23 [1895]. – The Trinity Episcopal Church at Woodbridge has closed Sunday for the first time in 144 years.  The cause was a quarrel between the Vestry and the Rev. L.H. Lighthipe, who had been rector of the church several years.  He was asked to resign two weeks ago, and said he would resign when the parish should pay him his salary, which had not been paid for a long time.  Some of the property of the church was mortgaged and the pastor was paid, and last week he went to Jacksonville, Fla., to take charge of a parish.  The church was built in 1754.

While in Jacksonville, Duval County, Florida, Lighthipe continued his botanical work.  One of his favorite places to botanize was “St. Nicholas” in Duval County.  Fort San Nicholas (30.306467 latitude, -81.639050 longitude) was “a Spanish Colonial blockhouse fort established in 1740 by Governor Manuel de Montiano in anticipation of an attack from the English under James Oglethorpe.  The blockhouse was located at a strategic crossing of the St. John’s River and remained in use until the British occupied Florida in 1763.  The British may or may not have garrisoned the fort during their 20 year occupation of Florida between 1763 and 1784.  The Spanish returned in 1784, refurbished the blockhouse and added a 100 foot square moat around it.  In 1796, John H. McIntosh captured and destroyed the fort as a revenge for the Spanish appropriations of his property.  The fort was rebuilt only to be destroyed again during the Patriots War and rebuilt after that.  The Spanish abandoned the fort on 4 July 1817… After the Spanish ceded Florida to the United States in 1821 the old fort was used by the Americans as a customs house and to prevent smuggling.” (4)

According to Barnhart, Lighthipe returned to New Jersey ca. 1899.  Whether he resumed a pastoral post is unclear, but he continued to botanize until 1918.  The last specimen which I have found collected by Rev. Lighthipe is Actaea alba, collected on 25 September, 1918 in Rocky Hill, New Jersey; the specimen is curated by NY.

Lewis Henry Lighthipe died on 14 December 1927 and is buried in the Rocky Hill Cemetery in Somerset County, New Jersey. (2)