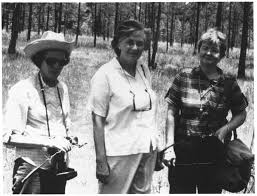 The University of North Carolina at Chapel Hill Herbarium (NCU) has cataloged about 25 vascular plant specimens collected by Florence Montgomery Givens. All specimens found thus far were collected in Oglethorpe County, Georgia as vouchers for her thesis on the flora of the Echols Mill granite outcrop.  Most specimens at NCU bear her maiden name, but a few have her married name, so they are cataloged under “Montgomery Givens, Florence”.

Florence Isobel Montgomery Givens was born to Sarah L. Johnston and Hugh Montgomery in Donaghmore, County Tyrone, Northern Ireland3.  According to Lievens et al., Florence grew up and graduated from high school in Sherrill, New York.  She earned an AAS (associate degree in science) in Ornamental Horticulture & Biological Technology from the State University of New York at Farmingdale, then attained a BS (bachelor of science) degree in Botany from the University of Georgia in Athens in 1964.  She earned a Masters Degree at University of Georgia under Dr. Wilbur H. Duncan, and the title of her 1971 thesis was “The Vascular Flora of Echols Mill Granitic Outcrop.” 1

“In 1976, Florence and her husband, Ray, moved to Louisiana where Ray took a faculty position in geology at Nicholls State University in Thibodaux.  Four years later, Florence began her association with the Department of Botany at Louisiana State University in Baton Rouge where she was chosen for the position of assistant curator of the herbarium [LSU], working under the direction of Lowell E. Urbatsch.  One of her first duties was to organize Professor Clair Brown’s various plant collections which had been in storage since his death… Over the years, Florence collected many fine specimens; these have included not only flowering plants and ferns but also lichens and mosses.  At the time of her death, her collection numbers totaled over 5000 specimens, many of which are represented in the herbarium of Louisiana State University, and through exchange, in other herbaria… Another part of Florence’s botanical work will have enduring significance.  In 1977, the noted botanical artist, Margaret Stones, was engaged by Louisiana State University to prepare watercolor drawings of 200 plants for the Flora of Louisiana project.  Spanning more than ten years, the final number of plant drawings came to slightly more than 200.  Florence became a close friend of Margaret Stones and provided interesting and unusual plants for her to draw.  Approximately one fifth of the drawings are based on collections made by Florence alone or in association with others… Florence died on 15 November 1990 after a long struggle with cancer.”1