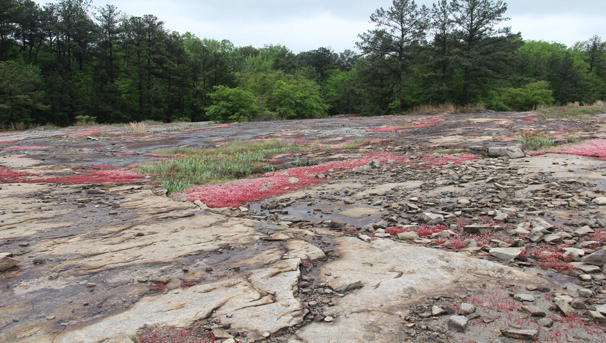 Dr. Burbanck was born Madeline Palmer in Moorestown, New Jersey.  Her parents were Rev. E. W. and Margaret Hopkins Palmer.  For her early education, she attended Moorestown Friends School.  She was a graduate of Wellesley College, having earned a B. A. in 1935 and a M. A. in botany in 1939.  She earned a doctorate in botany from the University of Chicago in 1941; the title of her thesis was “Cytological and taxonomic studies on the genus Brodiaea”.  (Her spouse, William Burbanck, received a doctorate in zoology from the University of Chicago in 1941.)

Dr. Burbanck taught at Drury College in Springfield, Missouri, then at Emory University in Atlanta, Georgia.  The Burbanck’s property was dedicated on Earth Day 2007 as “Burbanck Park,” and it is owned and managed as greenspace by Emory University.

In addition to research on the flora of granite outcrops, Madeline Burbanck was a research collaborator with her husband on the genetic variation and distribution of estuarine isopods, Cyathura polita in particular. Cyathura madelinae Hackney & Ganucheau was named in her honor in 1989. (Hackney, C. T. and R. F. Ganucheau (1989)  A new species of Cyathura (Isopoda, Anthuridae) from a high intertidal marsh in North Carolina, U.S.A.  Crustaceana 57(3):  304-310.)

Madeline Palmer Burbanck died at age 92 in Newport News, Virginia on 1 January 2007.  She was survived by her children, Melinda and George.