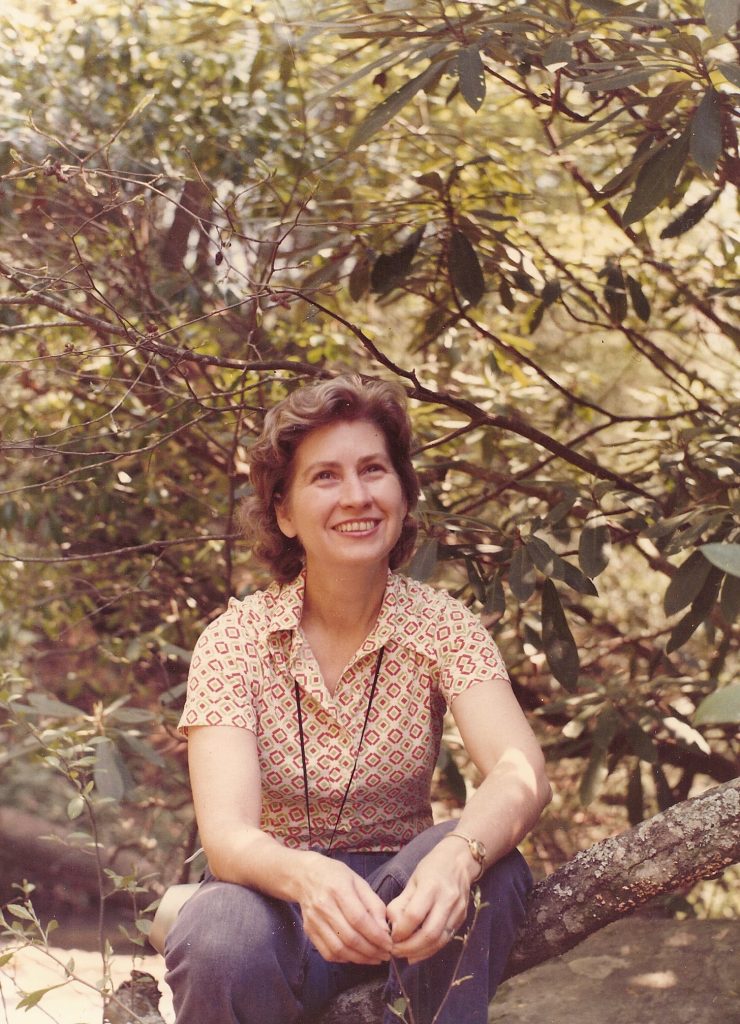 Ms. Harbison Pharr earned a B.A. in 1963 from Lenoir-Rhyne College (Hickory, NC) and an M.S. and Education Specialist in Science from Appalachian State University (Boone, NC) in 1965. (1)  In 1966 she began her long teaching career at Western Piedmont Community College in Morganton, North Carolina.  She taught general biology, environmental science, botany, and anatomy & physiology. (2)  In 1981 she taught “Ecology of the Okefenokee Swamp in Georgia” which included a week-long field trip.  The course was co-taught by Bob Benner, a physical education instructor, and included not only “study of the variety of plant and animal life found in the lakes, prairies, hammocks, swamps and cypress forests of the swamp,” but also “various camping and canoeing skills will be learned as the group lives in tents, prepares camp meals, and canoes thru the Okefenokee wilderness and the adjoining Suwanee River.” (4)  “For many years she taught a course in the wildflowers of western North Carolina that culminated in weekend-long camping trips to identify the flowers of the region.  In 1986 [she] received the first “Excellence in Teaching Award” from Western Piedmont Community College and [in 1995] was named Instructor Emerita upon her retirement after 29 years of service.” (1)

After retiring from teaching, she served as the first curator of the Burke County History Museum.   In 1980 she authored Trail Guide to Bluff Mountain Preserve, Ashe County, North Carolina.  The book was illustrated by Laurie M. Stewart Radford and published by Regulator Press of Durham, NC.  On 25 April 1987 The North Carolina Nature Conservancy awarded her the Avery Holman Stewardship Award, noting “Ruby served as the Chairwoman of the Bluff Mountain Stewardship Committee since its inception in 1978 until 1986.  She is responsible for generating local support for the Bluff project and for writing and editing the Trail guide to Bluff Mountain Nature Preserve, one of the most complete and professional preserve guides produced by The Conservancy nationwide.”(7)  She also served on the Bat Cave Stewardship Committee of the North Carolina Nature Conservancy in the 1980’s.  Ms. Harbison Pharr was a founder and board member of the Foothills Conservancy of North Carolina, and was the namesake and first recipient in 2006 of the “Ruby Pharr Conservation Volunteer Award” given by that organization. (8) “Established in her honor, the award recognizes a volunteer(s) each year who embodies Ruby’s outstanding volunteer efforts for the Conservancy and her lifelong devotion to land and water conservation in the Blue Ridge Foothills.”(8)

Ruby Deaton Harbison Pharr died in Morganton, NC on 8 March, 2015  at age 85.  She is buried in Forest Hill Cemetery in Morganton.