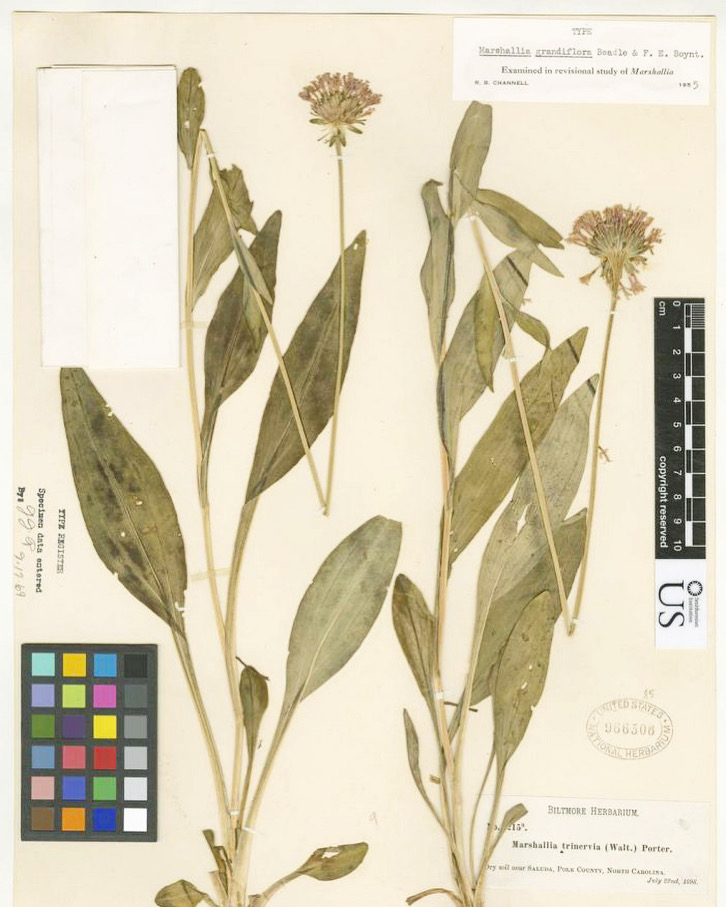 Thanks to research in the UNC-Chapel Hill Herbarium, part of the Garden, we now know that Appalachian Barbara’s buttons (Marshallia grandiflora) was a distinct species that grew just in Henderson and Polk Counties in the Blue Ridge Mountains of North Carolina. And it has been lost forever.

Appalachian Barbara’s buttons, a tall, intricate member of the sunflower family, hadn’t been seen in North Carolina since 1919. Until now, it was presumed to be the same as a closely related species that continues to grow from Pennsylvania down to Tennessee. But when Derick Poindexter and Alan Weakley of the UNC Herbarium and Wesley Knapp of the NC Natural Heritage Program examined dried herbarium specimens of the lost North Carolina Marshallia, they found something striking: the North Carolina mountain species was demonstrably different from the surviving species.

The surviving species is now renamed Monongahela Barbara’s buttons (Marshallia pulchra), and it’s extremely rare itself. The area of North Carolina where Appalachian Barbara’s buttons once grew, south of Asheville, now bears the grim label of “extinction hotspot,” as two other plants that grew only in that region have also gone extinct.

We can’t conserve the precious biodiversity of North Carolina if we don’t know what’s here in the first place: that’s why institutions like the UNC Herbarium are so critical. We’re proud of and grateful for the work of our colleagues!

Read more about the Appalachian extinction hotspot in this article in The Revelator.