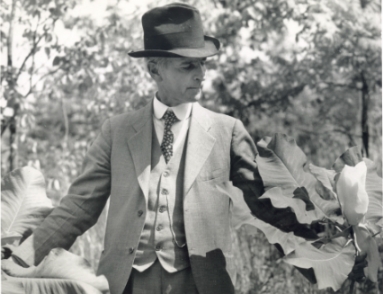 The University of North Carolina at Chapel Hill Herbarium (NCU) has about three dozen specimens collected by Charles Edward Raynal.  All are vascular plants, and most were collected in the Piedmont of North Carolina.  NCU seems to be the only herbarium curating Raynal’s specimens.

Charles Edward Raynal and Solomon Wallace Hoffman were among the first botanists to take an interest in the flora of Rocky Face Mountain in Alexander County.

A botanist by avocation, Charles E. Raynal acquired a substantial botanical library including many first edition copies of works by Carolina Botanists. He botanized widely in the Carolinas (frequently when in South Carolina with Dr. F. Dudley Jones, his close personal friend and fellow Presbyterian minister). He corresponded on many occasions with Dr. J. K. Small of the New York Botanical Garden and sent specimens for identification and verification to Dr. Small. He was an avid student of woody plants, both native and ornamental, and wrote several papers of botanical interest, some of which were published. He was a committed conservationist, a fact reflected both in his collection of scientific articles, pamphlets, on books and in his own writings. (1)

Among the woody species that caught Raynal’s attention was a North Carolina state-level rare species, Magnolia macrophylla. His first herbarium specimen sent to NCU is of a branch and some petals of that species collected in May 1932. Raynal apparently led a collecting trip later that year to show two known locations of the plant to Dr. William Chambers Coker, head of the Botany Department at University of North Carolina at Chapel Hill. Raynal also sent live specimens to Coker and his research assistant, Alma Holland Beers, which each planted in their yards in Chapel Hill. The tree planted in Beer’s yard in the Gimghoul neighborhood in the 1930’s still grows there today, and many mature trees can be found naturalized in nearby Battle Park.

Written by Lisa Giencke in August, 2006; updates and edits by Carol Ann McCormick.  Many thanks to Dudley J. Raynal for information and photograph of his grandfather.