The University of North Carolina at Chapel Hill Herbarium (NCU) curates about 46 vascular plant specimens collected by William McCally Pollock.  As we continue to catalog our collections it is likely that we will discover more of Pollock’s specimens at NCU.  All found thus far were collected in West Virginia between 1894 and 1897, and most have just county and state.  The few exceptions to this are specimens which Pollock notes are from the communities of Sago, Lorentz, Hampton, and Buckhannon in Upshur County, West Virginia. 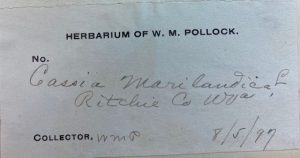 William McCally Pollock was born 25 June 1877 in the community of Wood in Mason County, West Virginia to Samuel M. Pollock and Berenice (or Bernice) McCally Pollock.(1)  Samuel Pollock was a miller.(2)  William graduated from the University of West Virginia in Morganton with an A.B. in 1899, then moved to Washington, D. C. where he held several posts in the federal government.  In 2900 he was a Scientific Aid in the Division of Botany in the Department of Agriculture, and in 1901 served as the English secretary to His Excellency Wu Ting-fang, Chinese Minister to the United States.  In 1902 he returned to the Department of Agriculture, this time in the office of the Agristologist, Grass and Forage Plant Investigations in the Bureau of Plant Industry. (3, 4, 10)  A 1903 directory to employees of the Bureau of Plant Industry in the Department of Agriculture lists William as a clerk with a salary of $1,200.

There is an intriguing but puzzling record of a William M. C. Pollock marrying Ray F. Johnson (b. 1873) on 5 July, 1904, in Washington, D. C. (8)  Ray was also a government clerk in the Department of Agriculture, so this seems likely but subsequent documents do not show a link between Ray and William. (9)

The 1910 US Census shows William living with the extended family of his brother-in-law, Cecil C. Fryer, a sawyer in a saw mill in Shady Spring, Raleigh County, West Virginia.  The household included William’s sister, Isa Lenore, and their children, Cecil, Jr., Bernice, and Phyllis as well as William’s parents, Samuel and Bernice Pollock.  While Samuel’s profession is listed as “Milling expert”, William’s profession is listed as “None” despite the fact that he was only 32 years old, nor is there any mention of his spouse, Ray. (5)

World War I draft registration lists William as age 41 and a clerk in the State Department, while his registration for the draft in World War II lists him as age 64 years and working in a print shop. (6, 7)

The University of North Carolina at Chapel Hill Herbarium would appreciate finding out more information about William McCally Pollock.