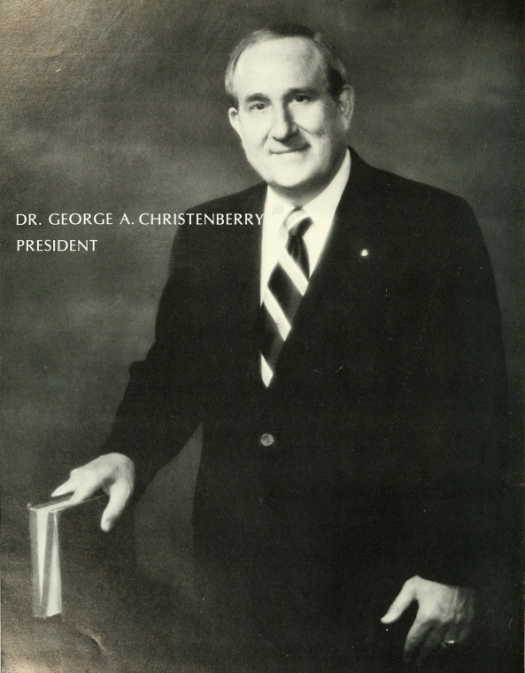 The University of North Carolina at Chapel Hill Herbarium (NCU) curates 36 specimens collected by George Andrew Christenberry, who usually signed his labels as “G. A. Christenberry.”  It is possible that as we continue to catalog our collections more will be found.  Despite the fact that Christenberry was a mycologist most of his specimens at NCU are vascular plants, likely collected as for a class as they are from near Chapel Hill, especially Battle Park.

Christenberry studied with Dr. William Chambers Coker and in 1938 earned his M.A. with his thesis, “A study in the effect of light of various periods and wave lengths on the growth and asexual reproduction of Choanephora cucurbitarum (Berk. and Rav.) Thaxter”.  He continued his graduate studies at Carolina under Dr. John Nathaniel Couch and earned his Ph.D. in 1940 with his thesis “A taxonomic study of the Mucorales in the southeastern United States”.

Published in The Augusta Chronicle on 4/23/2009:
President Emeritus of Augusta State University AUGUSTA, Ga. – Entered into rest Tuesday, April 21, 2009, Dr. George Andrew Christenberry, 93, husband of Elizabeth Reid Christenberry. Dr. Christenberry was a native of Macon, Georgia, and grew up in Greenville, South Carolina. He received the B.S. degree (magna cum laude) in biology from Furman University, and the M.A. degree in 1938 and the Ph.D. degree in 1940 in biology and physics from the University of North Carolina. Dr. Christenberry served as professor of biology and chairman of the department at Meredith College, Raleigh, North Carolina, 1940-1943. He then joined the faculty of Furman to teach physics to the Cadet Training program of the Army Air Corps. A year later he entered the Navy as a radar officer and served in the Pacific theater. Dr. Christenberry returned to his teaching position at Furman in 1946, subsequently becoming professor of biology and dean of the Men’s College. He was named president of Shorter College, Rome, Georgia, in 1953, returning to Furman in 1958, where he became administrative director and later vice president of development. During his presidency at Shorter, he also served as president of the Georgia Education Association’s Department of Higher Education and the Georgia Association of Colleges. Dr. Christenberry became associated with Georgia College, Milledgeville, Georgia, as professor and chairman of the biology department in 1964. In 1965, he was named dean of the college and served in that capacity until coming to Augusta. From 1974-1977 he served on the Board of Directors of the American Association of State Colleges and Universities. With other college presidents, Dr. Christenberry composed a team that visited the Peoples Republic of China upon invitation of the Ministry of Education. Similarly he and Mrs. Christenberry were invited to visit Taiwan at the request of the Republic of China Ministry of Education. In the summer of 1979, he was named acting vice chancellor for the University System of Georgia. Upon the appointment of a chancellor, Dr. Christenberry, at his request, returned to the presidency of Augusta College in July of 1980. Dr. Christenberry was a member of Phi Kappa Phi and Sigma Xi and had been active in the Georgia Academy of Science, the Association of Southeastern Biologists, and the American Institute of Biological Sciences. He served as president of the Rotary Club in both Milledgeville and Augusta and had been named a Paul Harris Fellow. In his church, First Baptist Church of Augusta, Dr. Christenberry served as deacon, moderator, trustee, and Sunday School teacher. He was elected to the executive committee of the Baptist World Alliance and attended meetings in England, Austria, Liberia, as well as the United States. Dr. Christenberry’s civic service included United Way, Red Cross, the Chamber of Commerce, the Human Relations Commission, the Greater Augusta Arts Council, and the Augusta Richmond County Museum. Since retirement he became an active member of the Augusta Genealogical Society. He was listed in Who’s Who in America and in American Men and Women in Science. Family members in addition to his wife include sons: George A. Christenberry, Jr., of Newnan, Georgia, and John Reid Christenberry of Hoschton, Georgia; daughter: Becky Christenberry Williams of Augusta; eight grandchildren and seven great-grandchildren. A memorial service was held Saturday, April 25, 2009, at 2:00 P.M. at First Baptist Church of Augusta with the Dr. Rodger Murchison officiating. Honorary Pallbearers were members of the Crusaders Sunday School Class. Interment followed in the Church Memorial Garden. Thomas Poteet & Son Funeral Directors, 214 Davis Rd., Augusta, GA 30907 (706) 364-8484.

PUBLICATIONS (likely an incomplete list):
Christenberry, George A.  1938.  A study of the ffect of light of various periods and wave lengths on the growth and asexual reproduction of Choanephora cucurbitarum (Berk. And Rav.) Thaxter.  Journal of the Elisha Mitchell Scientific Society 54(2):  297-310.

Christenberry, George A. 1940.  A taxonomic study of the Mucorales in the southeastern United States.  Journal of the Elisha Mitchell Scientific Society  56(2):  333-366.