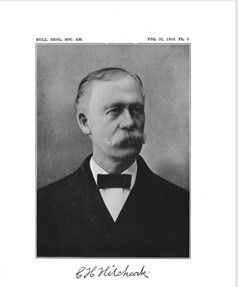 The University of North Carolina at Chapel Hill Herbarium (NCU) has cataloged 68 vascular plant specimens collected by Charles Henry Hitchcock. Most are from Florida, with a few from Alabama and Virginia; the few that are dated were collected 1888 – 1891.

Charles Henry Hitchcock was the brother-in-law Nathan Barrows, M.D., whose botanical specimens from Winter Park, Orange County, Florida are curated by NCU.  Hitchcock married first Martha Bliss Barrows, and then upon her death in 1892, he married her sister, Charlotte Malvina Barrows.  Nathan Barrows’ specimens are on Dartmouth College Herbarium labels, likely provided to him by Hitchcock, as Barrows has no other Dartmouth connection. Both Hitchcock’s and Barrows’ specimens came to NCU via the Jesup Herbarium of Dartmouth College as a gift in 2002.  It seems likely that Hitchcock and Barrows botanized together during family visits.

Hitchcock seems to have been interested in a wide variety of plants, as he collected not only ferns, but also shrubs, trees, and orchids.

Charles H. Hitchcock (1836-1919) served as New Hampshire State Geologist from 1868 to 1878. Hitchcock’s survey produced a three-volume work, “The Geology of New Hampshire” (1874-1878), and the folio, “Atlas to Accompany the Geology…” (1878). The maps in the atlas comprise the first detailed, comprehensive map of the bedrock and surficial geology of the state.

Hitchcock began teaching at Dartmouth College in 1868 and held the Hall Professorship of Geology and Mineralogy from 1869-1908. From 1868 until 1893 the predecessor of the University of New Hampshire, the New Hampshire College of Agriculture and the Mechanic Arts, was located in Hanover. The two colleges shared facilities in Culver Hall.

Hitchcock’s students nicknamed him “Type” because of the fact that he described and named so many of the rock units in the state and designated their “type localities” (the places where they are well exposed in their most typical forms). Most of these rock formation names are still in use.

He is an exemplar of the 19th century geologist who made contributions in a wide range of fields. His accomplishments include fieldwork in paleontology, bedrock and glacial geology, economic geology, and volcanology. He also synthesized others’ research resulting in compilation of significant maps at both state and national levels.(1, 2)

Charles Henry Hitchcock was born in Amherst, Massachusetts, August 23, 1836, and died in Honolulu, Territory of Hawaii, November 5, 1919… He was the sixth child of Edward Hitchcock, Professor of Chemistry and Natural History in Amherst College, 1825-45, later its president, from 1845 to 1854, and his wife, Orra White.  This mother had such classical learning and scientific and artistic talent that “she could read the Greek Testament and calculate eclipses”… [Charles] completed the classical and preparatory courses of Williston Seminary and been graduated thence in 1852, then graduated from Amherst College in 1856, a short time before his twentieth birthday… Charles, next after the college course, took up theological studies during a year at Yale and two years at the Andover Seminary, looking forward to be a pastor; but the lure of geologic field-work, which he had begun in the summer of 1867, on the survey of Vermont, changed his plans for life to investigations and teaching in geology.

Charles was the assistant geologist of Vermont four years, under direction of his father, the State Geologist, to the close of the survey… In 1861 he was appointed State Geologist of Maine, in which service he spent two summers in field-work… This survey included a general reconnaissance of Maine, with discovery of large areas of Upper Silurian and Devonian formations.

For Amherst College he was curator of the museum and lecturer on zoology from 1858 to 1865, and for Lafayette College was non-resident professor of geology and mineralogy from 1866 to 1870.

During a year in 1866-7 he studied at the Royal School of Mines, London, made researches of the crustacea and trilobites in the British Museum, and visited Switzerland for examination of its glaciers.

In 1868 he received appointments as State Geologist of New Hampshire and Professor of Geology and Mineralogy at Dartmouth College.  This State survey occupied ten year, with the publication of three quarto volumes and an atlas.  His active professorship at Dartmouth continued forty years, to 1908, and later was extended through his life by the title of professor emeritus.

On leave of absence from Dartmouth for parts of each year from 1870 to 1896, Professor Hitchcock was lecturer in geology for Mount Holyoke College.  In 1880-81 he additionally taught geology and zoology at Williams College and in the Virginia College of Agriculture and the Mechanic Arts.

… Between 1860 and 1870 Professor Hitchcock engaged largely as a mining geologist in examination and estimation of the quantity and value of mineral deposits for mining companies, traveling in Nova Scotia, New Brunswick, Quebec, the New England States, New York, New Jersey, Pennsylvania and southward to Alabama. Subsequently he examined the phosphate beds of South Carolina, Florida, and Redonda Island of the West Indies, the gold fields of eastern Oregon, the Chalcedony Park of Arizona, the Grand Canyon of the Colorado, and the Yosemite and Yellowstone parks.  In 1883, 1886, and 1898 he visited the Hawaiian Islands for their volcanoes.

… Professor Hitchcock removed in 1908, when he had completed forty years in the service of New Hampshire and Dartmouth College, to Honolulu, the principal city of the tropical Hawaiian Islands, to which he had previously made several visits.  Here his last eleven years were passed, excepting occasional returns in summers to the United States.

… In June, 1862, he married Martha Bliss Barrows, daughter of Prof. E. P. Barrows, of Andover, Massachusetts.  To this union two sons and three daughters were born, of whom the first, Arthur Charles, died in infancy, and the second son, Edward White, died at the age of nearly six years.  Maria Porter, the eldest daughter, married to Frederick Allen, has died.  The first wife of Professor Hitchcock died in February, 1892, and he married her sister, Charlotte Malvina Barrows, in September, 1894, who resides, with the two surviving daughters, Martha Barrows and Alleine Lee, in Honolulu. (3)