The botanist who gave his name to one of University of North Carolina at Chapel Hill’s biology buildings and its arboretum was born in Hartsville, South Carolina on October 24, 1872. His father was James Lide Coker, plantation owner, officer in the Confederate army, slave holder, and educational reformer who helped to found the South Carolina public school system and the Coker College for Women in Hartsville. His mother was Susan Armstrong Stout.

Coker received his undergraduate education at the University of South Carolina in Columbia and his Ph.D. from Johns Hopkins University in Baltimore, Maryland, working as the first student of Duncan S. Johnson, in 1901. In 1902 he came to the University of North Carolina at Chapel Hill as an associate professor. By 1908 he was a full professor and chair of the newly established Botany Department, located in Davie Hall (now home to the Psychology Department). He had also begun the planting of the Coker Arboretum adjacent to Davie Hall.

Coker’s research interests were far-ranging. His Ph.D. research concerned the embryogeny of Taxodium (bald cypress). He continued this type of work for a short time, investigating embryogeny and seed-formation in the gymnospermous genera Podocarpus and Cephalotaxus.

He was also interested in the woody flora of the Southeast, not only in an academic sense, but also for purposes of landscape design. Other topics of inquiry included bryophytes, filmy ferns, the teaching of science, and the biography of Southeastern botanist.

Coker’s first love was mycology, and the bulk of his publications (137 in his fifty-one year career at UNC-CH!) are devoted to the fungi. His most noted achievement is probably his research on the Saprolegniaceae, a group of water molds. This group was also the subject of one of Coker’s few independent books.  Coker’s fungi specimens deposited in the University of North Carolina at Chapel Hill Herbarium (NCU) and other herbaria are cataloged in the Macrofungi Collections Consortium website.

Besides his scientific research, Coker also continued his father’s interest in education, founding the Bureau of Design and Improvement of School Grounds. This group was especially concerned with the beautification of school grounds through planting. Carolina’s campus benefited tremendously from Coker’s landscaping skills as he served for thirty years on the Building and Grounds committee.

Finally, Coker was known for his love of teaching. He was known for a spontaneous teaching style with an emphasis on field trips and abundant fresh material for students to examine.

In a paper published just after Coker’s death (June 27, 1953), his students John N. Couch and Velma D. Matthews wrote that “to a remarkable degree, he had the rare ability to stimulate the student to want to find out more for himself and to believe in the importance of what he was doing, if it added to knowledge.”

Coker had also been known to financially assist needy graduate students and to contribute from his own pocket to the collections of the University of North Carolina at Chapel Hill Botany Library (later named after his student, John Couch). The current strength of both the botanical library and the herbarium owes much to Coker’s labors.

In 2011 the University of North Carolina at Chapel Hill Herbarium (NCU) joined 33 other herbaria across North America to database 2.3 million bryophyte and lichen specimens.   Moss specimen labels from this collaborative effort funded by the National Science Foundation (NSF ADBC 1115116) can be searched and viewed at bryophyteportal.org

In 2012 NCU joined 34 other institutions across the United States to form the Macrofungi Collection Consortium. This collaborative effort funded by the National Science Foundation (NSF ADBC 1206197) aims to database 1.4 million dried scientific specimens of fungi.   NCU’s macrofungi collection, including those collected by W. C. Coker, can be accessed at mycoportal.org

In 2014 NCU joined more than 100 herbaria across the Southeastern United States to catalog and digitize vascular plant herbarium specimens for “ The Key to the Cabinets: Building and Sustaining a Research Database for a Global Biodiversity Hotspot”.  Funded by the National Science Foundation, the ultimate goal of this project is to develop an imaged and databased set of over 3 million specimens from over 100 herbaria in one of the most floristically diverse regions in North America and a global hotspot of plant diversity. This will represent a valuable data source for research on the response of vegetation to climate change, human development, and rapid migrations of introduced species.  NCU’s vascular plant specimens from the Southeastern United States, including those collected by W. C. Coker, can be accessed at sernecportal.org

In 2018 NCU joined The Pteridophyte Collections Consortium Thematic Collections Network is a project funded through the National Science Foundation Advancing the Digitization of Biological Collections program to digitize and web-mobilize over 1.6 million extant and fossil pteridophytes from 36 herbaria and museums throughout the United States.  Pteridophytes (ferns, lycophytes, and their extinct free-sporing relatives) are a diverse group of plants that today comprises approximately 12,000 species and plays a major role in terrestrial ecosystems. Pteridophytes were even more important in the past, especially before the evolution of the gymnosperms and the flowering plants. This group of land plants were the first plants to evolve roots and leaves, the first to colonize drier habitats, and the first to form forests.  NCU’s pteridophyte specimens collected from around the world, including those collected by W. C. Coker, can be searched at pteridoportal.org

Below are two samples of Coker’s handwriting. The writing samples represent a letter to L. H. Bailey at Cornell, written in Coker’s more legible hand (bottom) and notes taken from Theophrastus’ Enquiry into Plants (top).  The manuscript materials on this page are from the archives of the Herbarium at the University of North Carolina at Chapel Hill and are used with permission. Further materials are located in the Coker papers in the Southern Historical Collection, Manuscript Department, Wilson Library, and in the papers of the UNC Botany Department. 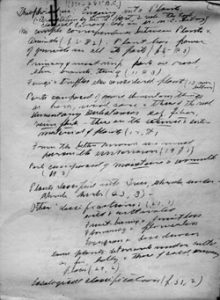 Coker’s writings are extremely numerous, consisting largely of papers printed in the Journal of the Elisha Mitchell Scientific Society and Mycologia. These writings are listed in Couch and Matthews’ article in Mycologia vol. 46, pp. 372-383.

In 2007 the John N. Couch Biology Library at the University of North Carolina in Chapel Hill completed a bibliography of William Chambers Coker’s publications.

A few of Coker’s seminal works: