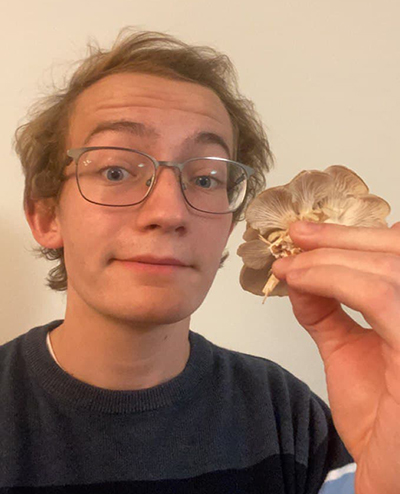 Dan Meyers, a senior biology major and the Mary McKee Felton Intern at the Herbarium, was inducted in Phi Beta Kappa, the nation’s oldest and most honored college honorary society. Fewer than 1% of college students qualify.

Meyers said his induction, “was an honor. It was a really cool feeling… I know that there’s a lot of impressive people throughout the U.S. that have been inducted.”

Meyers began working at the Herbarium as a volunteer his freshman year after seeking opportunities related to mycology, or the study of fungi. By his second semester at the Herbarium, Meyers was offered the Mary Mckee Felton internship.

Through the Herbarium he completes fungal surveys of the areas managed by the Garden, identifies, labels and indexes type specimens, describes new species based on the collections and work of Dr. John Nathaniel Couch, and identifies and archives fungi specimens in databases such as MyCoPortal, which are used by biologists globally to aid in research and to request specimens. The Herbarium has sent over 1,000 collections through the database.

Meyers and his mentor, Dr. Van Cotter, have recently co-authored a 100-page publication submitted to the Journal of the North Carolina Academy of Science, which is currently under review. The publication involves their research about fungal collections.

“Putting together a paper such as this is not typical of an intern,” said Dr. Cotter. “His work ethic is unmatched. He’s very dedicated, very diligent, very self motivated as well.”