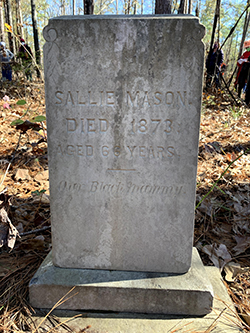 On November 17th, Ken Moore led a field trip of North Carolina Botanical Garden tour guides and a few community members to the Jesse Mason Cemetery, just within the boundary of the Chatham County line near its intersection with Orange, Durham, and Wake Counties. The cemetery is located in the Jordan Game Land, property managed by the North Carolina Wildlife Resources Commission.

We were joined by Chris Baranski, Northern Piedmont Management Biologist with the North Carolina Wildlife Resources Commission (WRC) who has participated in management of the area surrounding the cemetery for close to 15 years; Julie Moore, who documented the wetlands prior to the construction of Jordan Lake; and Danita Mason-Hogans, Duke Center for Documentaries Project Coordinator, UNC-Chapel Hill Commission on History, Race, and A Way Forward member, and descendent of people enslaved by the Mason family.

Of particular interest to the tour guides is learning more about persons and historical events that led to the establishment of the North Carolina Botanical Garden and its subsequent developments so that we can more fully interpret the Garden and its history. You may have already surmised from the name Jesse Mason that the cemetery is very much tied to the Garden in terms of our flagship preserve, the Mason Farm Biological Reserve. Jesse Mason was James Pleasant Mason’s father. James Pleasant Mason married Mary Elizabeth Morgan, who inherited her family’s farm from her father Solomon Morgan and two siblings who predeceased her. This land was later bequeathed to the University and subsequently became the 367-acre Mason Farm Biological Reserve.

The original intent of the field trip was to learn what is known about the Jesse Mason cemetery and to see the grave of Sallie Mason, an enslaved woman buried alongside the Mason family members. Additional significant topics came to light once we arrived. The cemetery is in a wooded area on a hill, surrounded by an open pine savanna managed by the WRC.  Its perimeter is marked with wrought iron fencing in an approximate 25 x 30ft rectangle. Within that space there are twelve grave markers.

As mentioned earlier, Sallie Mason, the enslaved person who served the Masons, was buried within the same iron fence as the other family members. For that time, this was a highly uncommon practice, and our group discussed the “honor” the Mason family must have thought they were giving to Sallie by allowing her presence in the family cemetery in death. The consideration of this particular phenomenon was starkly juxtaposed by the nearly 30 graves of enslaved persons surrounding the mostly northern, eastern, and southern side of the cemetery.

Some of the grave depressions of those enslaved by the Masons were marked with field stones, and others were missing stones or otherwise unmarked. Had they all been found? Are there others outside the protected perimeter that remain? While this cemetery has been well documented, there is some uncertainty as to significance, in terms of the Mason’s view at the time, of the persons buried just outside the iron fence.

It became evident after we had traipsed over the intensively managed game land that the cemetery was left untouched by the logging that had occurred in recent years, and had been done so with intent. However, the group discussed how this site might be better protected, managed, and stewarded; specifically, if there was interest in pulling together people and resources from an undetermined entity to make plans to honor and preserve this historically important site.

Now that our tour guides have seen it, our diversity, equity and inclusion committee members know about it, and more community members and friends of the Garden are made aware, it behooves all of us to not allow this place to decay. Additionally, we can move forward with further research, discussion, and interpretation of this site.

Although this particular site is not located on property the Garden manages, the significance of it remains: The Mason (and Morgan) families enslaved people to profit from and maintain their properties. Sallie Mason likely raised James Pleasant Mason and Mary E. [Morgan] Mason’s daughters, and she more than likely contributed to the Mason family’s success in untold ways. And she is but one of many. It’s important for us to incorporate a narrative that includes and in fact highlights the enslaved people who made it possible for families like the Morgans and Masons to contribute land to the University’s efforts.