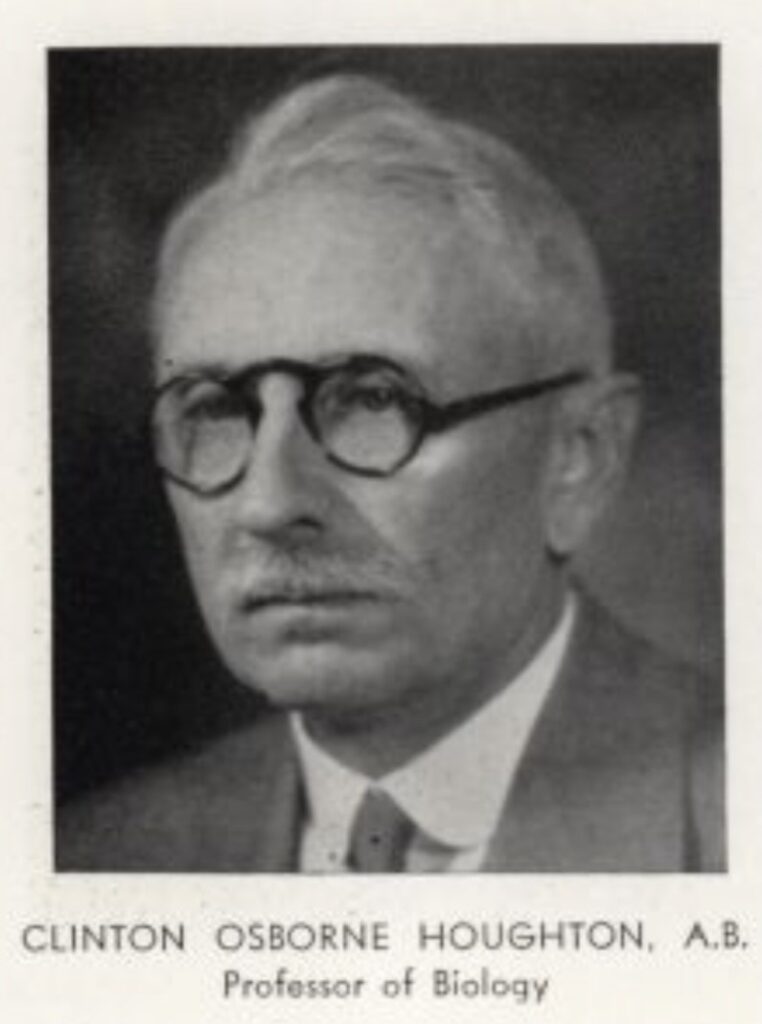 The University of North Carolina at Chapel Hill Herbarium (NCU) curates about a dozen vascular plant specimens collected by Clinton Osborne Houghton, who usually signed his labels as “C. O. Houghton”.  They were collected between 1913 and 1930 from Maryland, Delaware, and New York.  As our collections continue to be cataloged it is likely we will find more of his collections.

NCU has found a single specimen collected by Frederic Courtland Houghton, Clinton’s son.  The specimen label has “F.C.H.” as the collector, but as it is on a printed label bearing “Herbarium of C. O. Houghton” along the top, one can be quite certain that the collector was Frederic.

Houghton attended Helena High School and Potsdam Normal School, and in 1902 he graduated from Cornell University with an A.B. On November 29, 1902, he married Adelaide Asenath Eastman from Potsdam, New York, and on November 11 of the following year they gave birth to their only child, Frederick [sic] Courtland Houghton. After graduating from Cornell, C.O. Houghton found positions as an associate professor of biology at the University of Delaware and as an entomologist at the Delaware Agriculture Experimental Station, both of which he held until 1906. Afterwards, he became a professor of zoology from 1906-1909, and then a professor of biology from 1909 until his retirement. He was a fellow of the American Association for the Advancement of Science, a member of the American Association of Economic Entomology, Sigma Xi, Phi Kappa Phi, Theta Chi fraternity, and the Gamma Alpha Science Society. He was also an active member of the Newark Country Club, playing golf and entering tournaments quite frequently.

Frederick [sic] Houghton, referred to as “C” in the diaries, attended the University of Delaware, graduating with a B.S. in 1925, and continued his studies at the University of Pennsylvania, where he received an A.M. in 1927. While at Pennsylvania, he was an assistant in botany for the 1925-26 academic year, and during the following academic year he was an instructor of biology at Temple University. When he graduated, he too became a professor of biology at the University of Delaware. He was a member of many of the same professional and social organizations as his father, including the Newark Country Club.

As suggested by the diary entries, and confirmed by the Newark City Directory, both father and son lived in the same residence at 227 W. Main Street in Newark. By 1961, however, they had moved to 111 Cheltenham Road, in Newark. Clinton O. Houghton died sometime in late 1969 or early 1970*, and Frederick [sic] C. Houghton continued to live on Cheltenham Road until his own death in 1990.”

*According to Find A Grave, Clinton Osborne Houghton died on 8 November, 1967 and is buried in Gracelawn Memorial Park in New Castle County, Delaware.