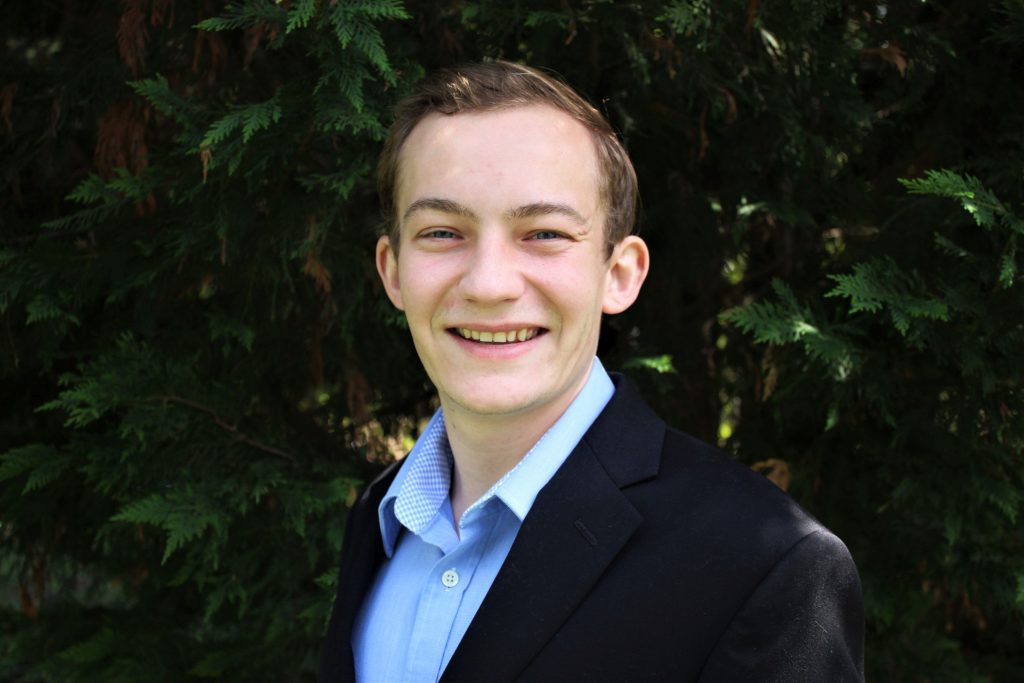 The Couch Award is given to a senior biology major with interests in plant biology who has demonstrated the highest ideals of scholarship and research. The 2021 winner of the Couch Award in the University of North Carolina at Chapel Hill Biology Department is Daniel Meyers. He will be graduating in May 2021 with a B.S. in biology and minors in chemistry and entrepreneurship.

Dan Meyers has been a fixture in the University of North Carolina at Chapel Hill Herbarium since his first year at Carolina. In the autumn of 2017, he volunteered with Herbarium associate Dr. Van Cotter to locate, label, and index type specimens in the Herbarium’s extensive fungal collections. In January 2018, he joined the Herbarium as the Mary McKee Felton Intern, and continued to document our type collection. That work culminated in “Inventory of fungal and other type collections held at the University of North Carolina at Chapel Hill fungal and lichen herbaria (NCU),” submitted for publication in the Journal of the North Carolina Academy of Science by Cotter and Meyers. “This manuscript is truly a magnum opus,” says Herbarium curator Carol Ann McCormick. “Cotter and Meyers’ manuscript is 116 pages long and details nearly 1000 type specimens, plus another 200 which are new to science but as yet un-named.”

Meyers and others in the Fungal Group in the Herbarium have been documenting the fungi found on Garden lands — Nature Trail Hill, Mason Farm Biological Reserve, and Battle Park in particular. “Our Mycota (list of fungal species) is currently 261 species,” says Meyers. “Many of those have been deposited in the Herbarium for future mycologists to study.”

In the spring of 2018 with co-authors Dr. Van Cotter and Meriel Goodwin, Meyers presented a poster “Identification and documentation of the fungal type collections in the University of North Carolina at Chapel Hill Herbarium” at the Mid-Atlantic States Mycology Conference (MASMC) at Congaree National Park in South Carolina. In the spring of 2019, along with co-authors Suzanne Cadwell, Avery McGinn, and Cotter, Meyers presented “Coker’s Lactarius taxa:  100 years later” at the MASMC held at the University of Tennessee, Knoxville. The UNC-CH Herbarium was the host of the 2021 MASMC, and in addition to being an organizer of the conference, Meyers gave a “virtual tour” of the Herbarium, as the entire conference was held via Zoom due to the ongoing Covid-19 pandemic.

Meyers has been an ambassador for mycology in the greater Carolina community by serving as a co-manager of the compost at the Carolina Community Garden. “The Carolina Community Garden… is an engagement program of the North Carolina Botanical Garden. The CCG aims to grow vegetables and fruit so that all employees have access to fresh sustainably grown produce through the shared efforts of staff, students, faculty, and local residents and to serve as a learning community for developing gardening skills, healthy living, social responsibility, and interdisciplinary academic pursuits.”1

“It was wonderful to recognize a biology student working on fungi with the Couch Award this year,” said Dr. Mark Peifer who served on the awards committee.  John Nathaniel Couch (1896-1986) was the second student to earn a doctorate in botany at the University of North Carolina at Chapel Hill, and he studied fungi for his entire academic career. In 1922 Couch joined the faculty of the Botany Department, and over his 46-year career at Carolina, guided 27 master’s and 15

doctoral students. During a brief period of study in Jamaica, Couch became interested in the genus Septobasidium, a fungus which exists symbiotically on the trunks of tropical trees with scale insects and which became the focus of his life’s work.2

Dan Meyers has taken an interest in Couch’s Septobasidium specimens, especially those which Couch had not identified to species. “Undescribed species are in herbaria, waiting for someone to take a careful look at them,” notes Meyers. “Couch collected many Septobasidium with Maximino Martínez in Mexico in the early 1940s,” continues Meyers. “Couch described two new species, but also mentioned in that paper3 that they’d collected more novel, undescribed species. Of course,” says Meyers, “some of these may have been described and named since Couch’s time. I am trying to sort out these un-labelled specimens collected by Couch and Martínez by employing both morphological methods and genetic analysis. I was able to find Couch’s notes in the Southern Historical Collection, including some nearly complete descriptions of potentially novel Septobasidium species. My work within the genus has been trying to get some sequence data from these ca. 80-year-old specimens while using some of my recent collections of Septobasidium as a positive control. So far I have not been able to get DNA sequences from the Couch specimens, but I still have a number of methods to try, and I got a bunch of technical suggestions from colleagues during the recent Mid-Atlantic States Mycology Conference.”