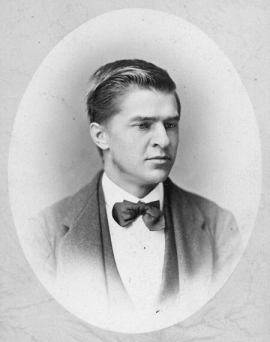 The University of North Carolina at Chapel Hill Herbarium (NCU) has cataloged about 300 herbarium specimens collected by  Ferdinand Blanchard — medical doctor, poet, and botanist. Most of these specimens were received in 2002 as a gift from the Jesup Herbarium (HNH) of Dartmouth College. A few of these specimens date from Blanchard’s days in Peacham, Vermont, but the vast majority were collected in the vicinity of Washington, D.C. between 1890 and 1892.  As our collections continue to be cataloged it is likely that more specimens collected by Dr. Blanchard will be found.

A document from the Rauner Special Collections of Dartmouth College Library claims that “a collection” of Dr. Blanchard’s herbarium specimens was given to the “St. Johnsbury Museum”. The Fairbanks Museum & Planetarium, in St. Johnsbury, Vermont, holds several hundred of Dr. Blanchard’s specimens. According to collections manager Raney Bench most were collected in New England.

Ferdinand Blanchard was one of five children born to Seth and Charlotte Bryant Blanchard.  Seth Blanchard, a farmer and carpenter, served in the Union Army and died February 2, 1864 in North Carolina.

Ferdinand Blanchard was educated at Montpelier Seminary, and then went to Dartmouth College.  He was the class poet, and graduated from 1874.  Ferdinand Blanchard and Alice G. White were married in West Windsor, VT in 1875. Daughter Mabel J. (31 January 1876 – 14 April 1880) and son Clair (16 November 1877 – 27 April 1880) were born while the family resided on Hammond Hill, Brownsville, Vermont.

Ferdinand earned a medical degree in 1878 from Dartmouth Medical School. He practiced medicine in Union Village, Vermont for two years, and Peacham, Vermont, for ten years. Daughter Ida Wild (31 August 1879 – 19 May 1880) was born in Peacham, Vermont.

Tragedy struck the family in the spring of 1880:  Mabel, Clair and Ida, all under the age of four, died within a month of each other from diphtheria, and were buried in Lot #5, Peacham Cemetery in Peacham, Vermont.  Ferdinand also contracted diphtheria, and though he survived, his health was impaired for the rest of his life.

Seth Blanchard was born 1 January 1885 in Peacham, Vermont, suffered from hydrocephalus, and survived less than a year.

Helen Glee Blanchard was born 18 June 1888, and was named for the glee her parents felt upon her birth.  Glee married Harold Reed Washburn in 1916, and died 1 April 1970 in Springfield, Vermont.

Ferdinand, wife Alice, and children Linn and Glee moved to Washington, D. C. in 1890, where Ferdinand practiced medicine and pursued botany.  Both a city directory and many of his specimens list his address in 1891 as “720 H Street, Northeast, Washington, D.C.”

In December, 2019, NCU Curatrix Carol Ann McCormick made a pilgrimage to the site of Dr. Blanchard’s address, 720 H Street NE in Washington DC.  The site of his home/office is now occupied by a nail salon, with a take-out restaurant on one side and a bank on the other. 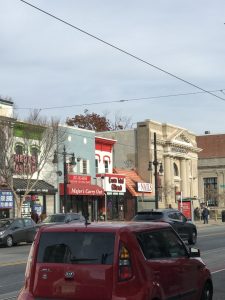 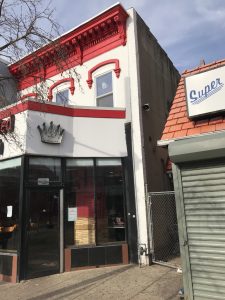 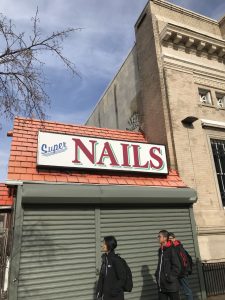 A photocopy of this work was kindly provided by the Rauner Special Collections of the Dartmouth College Library. Since an optical scan of the photocopy would be illegible, NCU staff opted to transcribe it for this web page.

There are “and always have been” three lines of highway between the East and West Parishes of Windsor. The most southerly follows Mill Brook from Reading thru Brownsville where it begins to be “double tracked” to The Narrows and enters Windsor Street past Ascutney Mill Dam Pond from the south. The second line runs through the two parishes easterly and westerly at about a middle distance from their northern and southern boundaries, plowing a pretty straight furrow up hill and down dale between Sheddsville in the West Parish and Windsor street. The third and most northerly line proceeds in the arc of a circle, roughly, from a point in the second line about a mile and a half east of Sheddsville and after making a great northern bend turns southerly into the second line some mile mile [sic] northwest of Windsor street. This northern line bisects the school district locally known as “Broomshire” though we are ignorant of the ethology of the name.

Home of a Carpenter
Here in Broomshire, next south of another town poorhouse (the jointure and dispointure of the parishes and towns produced a wealthy sufficiency of poorhouses) stood the brick house of Seth Blanchard and his worthy wife, Charlotte Bryant Blanchard. Seth, the husband, was a farmer and the kind of carpenter who never quarreled with his tools. Were there a meeting house to be built and there were in those days, he was send for as the “closest” workman in the parts to make the pulpit. Were an extra nice house going up, he was summoned to build the front stairs, he could construct any pattern of the newel-post the owner had ever heard tell of or dreamed of. He knew how to join a black walnut of [sic] cherry rail to perfection; he could draw together the parts of the rail to be matched by inserting a double-headed bolt in the ends of the pieces; then he tightened the notched nuts of this bolt with his nail-set and square-faced hammer; then he plugged the holes in which he had worked at the nuts so cleverly with some of the wood he was using that not even a ray of Transcendentalism, then traveling north from Massachusetts, could enter the closed apertures. We should also mention as bearing upon the quality of the Blanchard blood, which was probably Huguenot, that although Seth was beyond the age of military service, he enlisted to help abolish the curse that insulted humanity and gave his life [illegible] the Northern Cause, dying at [illegible] N. C. when a little less [illegible] years of age. Here in the above-mentioned brick farmhouse of his soldier father and not in a hospital, was born Ferdinand Blanchard on Nov. 8, 1851. Here in Broomshire he began to grow up and to attend the Broomshire district school while he was growing. His was an eager inquiring mind; his hair stood up in front, as though reaching for something, and gave testimony as to his disposition. So as soon as it could be managed in the family, he was fitting himself for Dartmouth College in Montpelier, and to Dartmouth he went where he was graduated in the straight Arts course in 1874, being the class poet. Pushing
on as a scholar, helping himself by farming, teaching school and writing, he was again graduated at Dartmouth in 1878, this time as a doctor of medicine.

We should spare few words in this place to speak of his qualities as a teacher; his was the opposite of the dry-as-dust method. When the class in the fifth or sixth reader came to the front benches to perform, it was his habit to ask the name of the author of the day’s piece; then he would give a little offhand talk about the author. One day the author was Tomas Babington Macaulay. “A tremendous name,” said young teacher Blanchard “but just the size for the man who wore it.” Then he went on to say that Macaulay was a writer of very deep and very wise essays, that he wrote the poem, “Horatins [sic] at the Bridge” ant that he wrote such a brilliant History of England it sold faster than it could be printed; also that he was such a wonderful talker that people called him a “conversationalist.” No boy or girl who heard these district school talks ever forgot them, no matter how many or what college halls he or she afterward trod. To begin his medical practice, Dr. Blanchard located in the town of Thetford, near his beloved Hanover, and a little later at Peacham where he practiced as a country doctor with good success till 1890, when his profession developing with himself, he removed to Washington, D. C. to enter upon a fuller field. In the meantime two life-events had occurred: he had lost his three children with diphtheria, himself barely escaping, and he had begun in earnest the collection of a valuable herbarium. Specializing in botany under
his own tutorship using the microscopical magazine, he gathered an herbarium of thousands of specimens. During these years his correspondence was world-wide; he became the fast friend of John Burroughs and of Vermont’s most famous botanist and naturalist, Cyrus Guernsey Pringle, who was so much imbued with the general and special capacities of Dr. Blanchard that, when he wished to enlarge the corps of specimen collectors at work for himself and Harvard College, he was wont to apply to Dr. Blanchard to provide him with botany-soldiers.

Excelled In Literature
Thus far we have seen Dr. Blanchard acclaimed in two fields of scientific endeavor, but perhaps his greatest ability and success lay in a third field – literature. We have [illegible] that he was a college class poet, but he was also a college prize-man poet, and thought [sic] he did not live long enough to write a volume of verse, and was careless about publicity, his poetical output was of a high order, and as has been said, “he was gradually gaining recognition at the time of his death.” John Burroughs parised [sic] his poetry, The Century and other magazine [sic] printed it, Boston calendar-makers used it literary men and women read, and speakers quoted it. A marked quality of his verse was his deep insight: he seemed to invent the angle from which he looked into either man or nature. A sign of spring to him was not that the hepatica was opening her calyx, but that his little white mare was shedding her hair. In his poem “Fire,” he permits the human race to feel tormenting centuries and to be a laughing-stock in Agony’s raree-show because the earth grew cold at the wooing of the flaming element. Did you ever see the word “raree” before? – but it’s in the dictionary. Likely Dr. Blanchard’s first appearance as a literary man in the West Parish was on July 4, 1876, when he read an original poem, “Remember the Fathers,” at a school picnic held in the grove of Joel Hale near Brownsville. This poem sets forth the patriotism associated with the day and was quoted from by a speaker at the Bennington Sesqui-Centenial in 1927. A quatrain of it runs:

“Remember their deeds and do as well,
That others to others our fame may tell;
Fling out the old flag and salute it with pride,
Be glad, but remember the fathers who died.”

Let us quote a little further from Dr. Blanchard at random:
“Earth is so full of things to know and see
From Northern Lights to animanculae.”

Here is an example of his prose thought:

”The men who saw the wounded hands and feet, who heard our Lord expound the prophecies concerning Himself, who saw Him wafted to heaven, were too much in earnest to sit down and dogmatize over differences of opinion.”

“Peace, hope, courage, faith – not the faith that reaches trembling toward the grave but faith that reaching down grasps the deep-laid cable that moves the car of humanity.”

For many years Dr. Blanchard had but one lung; he knew his condition and kept on his way, but one night when he was only 41, he heeded a sudden summons, and left his family and his threefold honors to begin again in another life. A son, “Linn,” named for the great Swedish naturalist, Linnaeus, and a daughter, “Glee,” named to express the joy of parents at her coming worthily survive him.