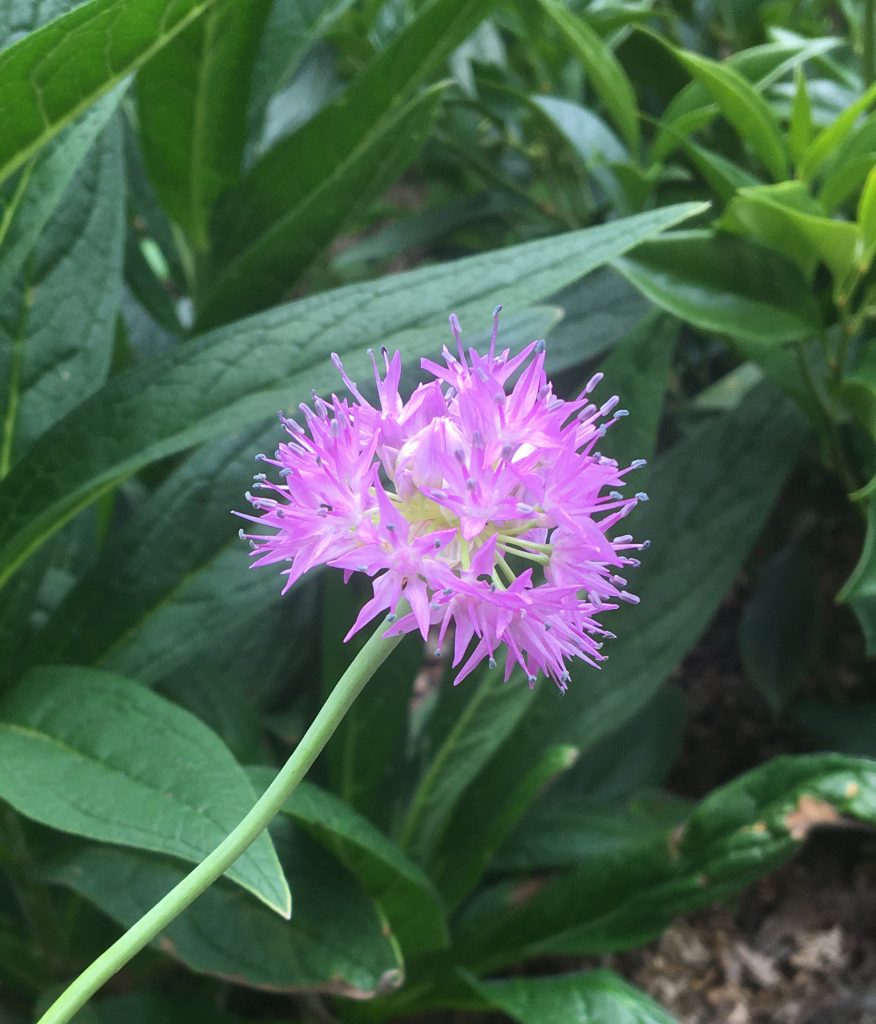 by Scott Zona, botanist, co-editor of PALMS, the journal of the International Palm Society, and research collaborator with the Herbarium of the University of North Carolina at Chapel Hill

Photo: Allium carolinianum blooming in my garden with rose-pink flowers.

Last fall, I received some bulbs of an ornamental Allium. Allium is the genus of onions, garlic, and leeks, but it also contains many species that are ornamental and rich in nectar and pollen. The bulbs grew and produced cheery, pink flowers – that smelled faintly of horse urine. The species was Allium carolinianum Redouté. I admit I had never heard of this species but assumed it must be native to our area.

European taxonomists named most of the flora of eastern North America long before the region had its own home-grown botanists, so hundreds of plants received the epithet “caroliniana/um.” Another popular epithet was “virginiana/um.” It was not for want of imagination that botanist applied these epithets. During the late 18th Century and throughout the 19th century, botanists were trying to understand how plants from eastern North America were related to familiar plants from Europe or eastern Asia. The geographic epithets were convenient handles for understanding species distributions. Allium carolinianum fits that model. At least, that’s what I was thought.

I was so wrong.

Allium carolinianum is native to a broad swath of central Asia, from Uzbekistan and Kazakhstan in the west to the Himalayas, western China, and Mongolia in the east – half a world away from the Carolinas. It was described in 1804 by the French artist Pierre-Joseph Redouté, botanical artist to Marie Antoinette and later, after the French Revolution, to Empress Joséphine, for whom he famously illustrated her rose collection at Malmaison. His illustration of A. carolinianum is technically and aesthetically superb, but he was clearly misinformed about the origins of this onion, which he claimed was from the Carolinas and named accordingly.

Allium carolinianum blooming in my garden with rose-pink flowers.

The rules of botanical nomenclature are such that, the first validly published name is the name we must use. It’s the reason we are stuck with Simmondsia chinensis, the plant from California and the Sonoran Desert that is the source of jojoba oil, and Coffea arabica, which is from Ethiopia and is the source of coffee. We’re stuck with name Allium carolinianum for a species that has nothing to do with the Carolinas other than to brighten our gardens and remind us of the foibles of botanists past.