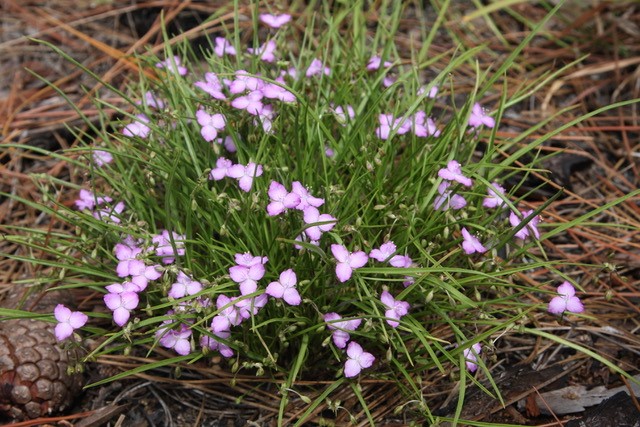 The University of North Carolina at Chapel Hill Herbarium (NCU) has about a dozen specimens collected by Alfred Cuthbert.  About half are from Augusta, Richmond County, Georgia, and the others from Saint Helena Island, Beaufort County, South Carolina.  Cuthbert’s specimens at NCU were collected between 1887 and 1901.  As NCU’s collection continues to be cataloged more specimens collected by Cuthbert may be found.

According to David Fairbrothers, longtime curator of CHRB, Alfred Cuthbert was an amateur naturalist with a main interest in botany.  He collected plants from the age of 30 and into his late 60’s, mostly from northern Georgia and northern Florida.  Professor M.A. Chrysler of Rutgers University purchased specimens from him a few times, and Cuthbert donated some specimens to CHRB.   “For the illustration of Botany, the Herbarium lately presented to the [Rutgers] College by Alfred Cuthbert, of Franklin, Essex county, New Jersey, meets the wants of the course in this branch of Natural History.  It contains about twelve hundred species, including the greater number of those occurring in New Jersey, besides a large number of New Mexican plants.”1

There are several plant taxa named in Alfred Cuthbert’s honor:

The 1880 census lists Alfred Cuthbert, 25 years old, a school teacher, and living in Randolph Township, Morris County, New Jersey.  He and two other were boarders in the home of Thomas & Mary Williams and their four children.

The 1900 census shows that Alfred Cuthbert, a coal dealer, lived with wife, Ella (b. April 1850 in New Jersey), widowed mother, and sister Mary C. (b. April 1860)  in the village of Summerville in Richmond County, Georgia.

The January-February 1920 issue of Torreya  lists Cuthbert as a member of the Torrey Botanical Club as living in Bradentown [sic] [Bradenton, Manatee County], Florida.

Cuthbert’s interest in ornithology was documented by Walter Hoxie, “The period of incubation [of black vulture eggs] is very nearly thirty days, but I have not quite decided this quite to my satisfaction as yet.  I have never taken more than two eggs in a set, but my friend, Mr. Alfred Cuthbert, of this place [Frogmore P.O., St. Helena Island, South Carolina], took a set of three in 1884.”3

1.       Nineteenth Annual Reports of the Rutgers Scientific School, The State College for the benefit of Agriculture and the Mechanic Arts, New Brunswick, N.J. for the year 1883.  Woodbury, N.J.:  James D. Carpenter, Book and Job Printer.  Pg. 26.