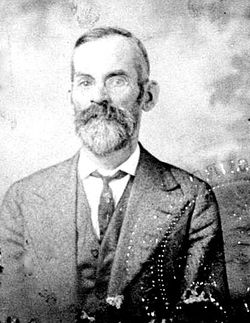 Vascular plants, fungi, bryophytes, lichens, and algae collected by Shafer are curated by many herbaria across North America.

John A. Shafer’s father, Theodore Shafer (d. 1884), was born in Berlin, Germany and emigrated to the United States at age 20.  Theodore was a dentist/pharmacist/barber by trade and operated a shop in Pittsburgh, Pennsylvania.  John Shafer’s mother, Catherine Hill (b. 1839), was born in Freedom, Pennsylvania.  John Shafer was one of eight children; his siblings included Theodore A., Hiram A., Henry A., William A., Elvina, Hettie, and Mathilda. 9

Shafer worked as a pharmacist for several years in Pittsburgh, but moved to a farm in Moon Township, Allegheny County, Pennsylvania.9   Shafer married Martha Tischer (b. 29 March 1867), a native of Germany, on 23 February 1889.7  John and Martha had four children together:  Quercus, Adolph, Ulmus and Martha Hettie.9 Martha Tischer Shafer died 1896 and was buried in Sharon Presbyterian Church Cemetery in Moon, Allegheny County, Pennsylvania.6,7,8  Shafer married Wilhelmina Tischer (b. 17 February 1875) on 15 January 1898.6  Wilhelmina had immigrated to the United States in 1896.4  Martha and Wilhelmina Tischer were sisters; as Shafer was widowed with four young children marrying a relative of his late wife was an expedient solution.9  By 1910, the family had grown to include sons  Theodore T. (age 8), and Celtis T. (age 11 months);  and daughters Dorothy E. (age 11), Elvina E. (age 10), Catherine (age 4).4   Son John and daughters Wilma and Grace were also part of the family but do not appear on the 1910 census.4,9

“During his entire life his books and plants were his best companions.  He early began to press plants and to accumulate a herbarium, and he was one of the charter members of the Botanical Society of Western Pennsylvania, organized in 1886… After the founding of the Carnegie Museum in 1896, the herbarium of the Society was transferred to the care of that institution and Mr. Shafer, in 1897, was appointed Custodian in the Section of Botany. Here he labored untiringly in the upbuilding of the herbarium, devoting particular attention to the flora of Western Pennsylvania… In 1894 and 1895 Mr. Shafer instructed a class in botany in the Western University of Pennsylvania (now the University of Pittsburgh), and on June 16, 1895, he received the honorary degree of Doctor of Pharmacy… During March, 1903, he was with [Nathaniel Lord Britton, Director of the New York Botanical Garden] on a botanical expedition in Cuba… In 1904, Mr. Shafer was appointed Museum Custodian at the New York Botanical Garden, a position he held until 1910.  Early in 1910 he returned to his farm near Carnot (about eighteen miles west of Pittsburgh), giving his attention to his gardening and greenhouse work, but making various trips during the colder months to the American tropics as a collector for the New York Botanical Garden.  Besides the expedition to Cuba in 1903, mentioned above, Dr. Shafer collected for the New York Botanical Garden in 1907 on the island of Montserrat, in the Lesser Antilles; in 1909-10 in eastern Cuba; in 1911-12 in western, central and eastern Cuba; late in 1912 he again went to western Cuba; in January, February, and March, 1913, he was one of a party making collections on St. Thomas, St. Jan, Tortola, Virgin Gorda, Anegada, Porto Rico, and Curacao; in early 1914 he collected in the mountains of eastern Porto Rico.”9

In October 1916 Shafer applied for a passport, with the intention of sailing on the “Byron” on 4 November, 1916 and visiting Brazil, Uruguay, Argentina, and Paraguay for the purpose of “Botanical research work for the New York Botanical Society”.5  From November, 1916 to April 1917, he collected in northern Argentina and in Paraguay, specializing this time a considerable degree on the Cactaceae.” 9

“Dr. Shafer was primarily a field-botanist of keen and discriminating observational powers, but aside from the various general reports on his tropical expeditions he published few botanical papers.  In 1901 he published “A preliminary list of the vascular flora of Allegheny County, Pennsylvania” based upon the collections in the herbarium of the Carnegie Museum, these being mainly the old collections of the Society.  He described a new species of Senna from western Pennsylvania, in 1904, naming it after his friend and a former member of our Society, Mr. O. P. Medsger.  He assisted Dr. Britton in the preparation of the volume “North American Trees,” published in 1908, he being responsible for the appearance therein of various references and a few photographs relative to some of the trees occurring in western Pennsylvania.”9

“Two genera of plants have been named after Dr. Shafer from specimens collected by him in western Oriente Province, Cuba:  Shaferocharis and Shafera.  Cuban species have been named in his honor in the genera Agaricus, Anastraphia, Baccharis, Cassia, Cocolobis, Eugenia, Eupatorium, Gesneria, Heptanthus, Hyptis, Lobelia, Miconia, Myrica, Passiflora, Puriaea, Revenia, Rhacoma, Rhamridium, Rondeletia, Senecio, Tabebuia, Tricera, and Varronia.  From Vieques Island Malphigia shaferi is named after him, as also from Montserrat a fungus, Fuscoporella, and several of his cacti from South America.”9

“In his enthusiasm Dr. Shafer stopped at no hardships in order to secure creditable collections, and it is probably due to this disregard for personal comfort, and to the absence of modern conveniences and methods of health and sanitation in some of the regions visited in northern Argentina and Paraguay, that he fell prey to an infection by some obscure disease (probably a blood parasite), from the effects of which, after a long illness, he died.”9  Shafer died at age 54 of trichinosis (complicated by cerebrospinal meningitis) in Sewickley Valley Hospital and was buried in Sharon Presbyterian Church Cemetery in Moon, Allegheny County, Pennsylvania.2,3