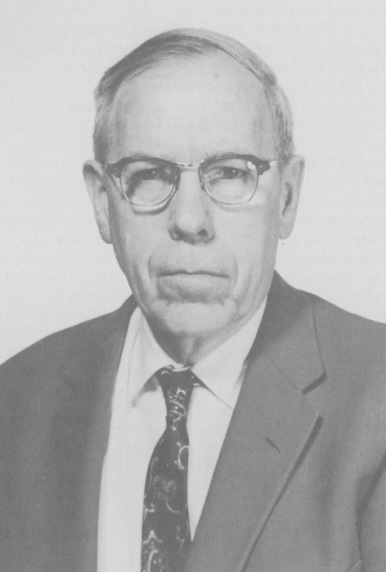 “Egbert Hamilton Walker was born in Chicago, Illinois, on 12 June 1899, the second of four children.  The family lived in South Haven, Michigan, where his father was a minister in the Congregational Church.  In early life, Egbert was influenced by three family ministers, including his parsimonious and unyielding Congregationalist father… While Egbert was often loath to accept the strict regimentation at home, his father’s influence, nevertheless, was evident in various ways in his attitudes and his relations with people in later years. At the age of two and a half years, he was a victim of polio that left him with one good arm and a less damaged left leg, but his iron will and stubborn determination overcame many of the difficulties associated with his disability.  He accomplished more than many of his colleagues with no physical handicap.

Egbert entered the University of Michigan at Ann Arbor in September 1918 in a liberal arts course. He had not yet decided on his major, but he was encouraged to become a botanist by H.A. Gleason, then an instructor in the botany department.  He also attended the University of Michigan Biological Station on Douglas Lake near Cheboygan, Michigan, where he had an opportunity to take various courses in botany, including the taxonomy of the bryophytes…

Following graduation in 1922 from the University of Michigan with at B.A., Egbert responded to a notice in the university newspaper that led to a position as a secondary school teacher in biology at Canton Christian College, later Lingnan University, in China… Egbert undertook the preparation of an annotated account of the common ornamental trees of Lingnan University Campus, a paper that later earned him his mater’s degree…

In September, 1926, through the recommendation of Prof. H. H. Bartlett of the University of Michigan, Egbert entered the University of Wisconsin as a graduate assistant in botany where he had planned on getting his Ph.D., but this did not turn out.  After two years he was awarded the M.S. degree for his paper “Fifty-one common ornamental trees of the Lingnan University Campus”, published in 1930, as his first scientific paper.

Again Prof. Bartlett befriended Egbert by alerting him to a position as Aid in the herbarium of the Smithsonian Institution in Washington, D. C.  He applied for and got the job on 28 June 1928… Dr. F. R. Fosberg has said: “Any perceptive botanist who works extensively in the general Old World collections in the U.S. National Herbarium can scarcely fail to appreciate the prevailing good order and evidence of care he finds there, largely the work of Egbert Walker over many years.”

Egberts taxonomic research centered on the Myrsinaceae of eastern Asia… He received his Ph.D. in 1940 [from Johns Hopkins University in Baltimore, Maryland] on a dissertation topic entitled “Revision of the eastern Asiatic Myrsinaceae“.  When he retired in 1958, he had been on the staff of the Smithsonian for 30 years.
During World War II, Egbert was in charge of a Serviceman’s Collecting Program.  This brought responses from various areas, in particular from botanists in the army of occupation in Okinawa…

Egbert was never idle.  He had many interests.  He was active in the church, having been a Congregationalist, Universalist, Unitarian, and finally a Friend.  He loved camping and his summers were often spent at the family retreat in Maine.  He was active in the Potomac Appalachian Trail Club, an inveterate hiker, and he was chairman of the Map Committee of that organisation for 20 years that resulted in an outstanding series of topographic maps of the Blue Ridge  Mountains from Pennsylvania to Virginia, including the Shenandoah National Park.  He was also the driving spirit in organising the Conference on District Fora (i.e., Washington, D.C.); it s purpose was to publish anew flora of the Washington-Baltimore area.  This resulted in two editions of a check-list, bu the project was never completed.  Likewise, he collected plants extensively in Shenandoah National Park that led to a published check-list with three supplements, jointly authored with F. R. Fosberg…

He married Dorothy (Dot) Kemball Walker on 10 April 1936, moved to Takoma Park, Maryland, and reared two children, William and Jeanne.  In 1976 he moved to Friends House in Sandy Spring, Maryland.  He died there 10 March 1991 of complications from an influenza infection.”1