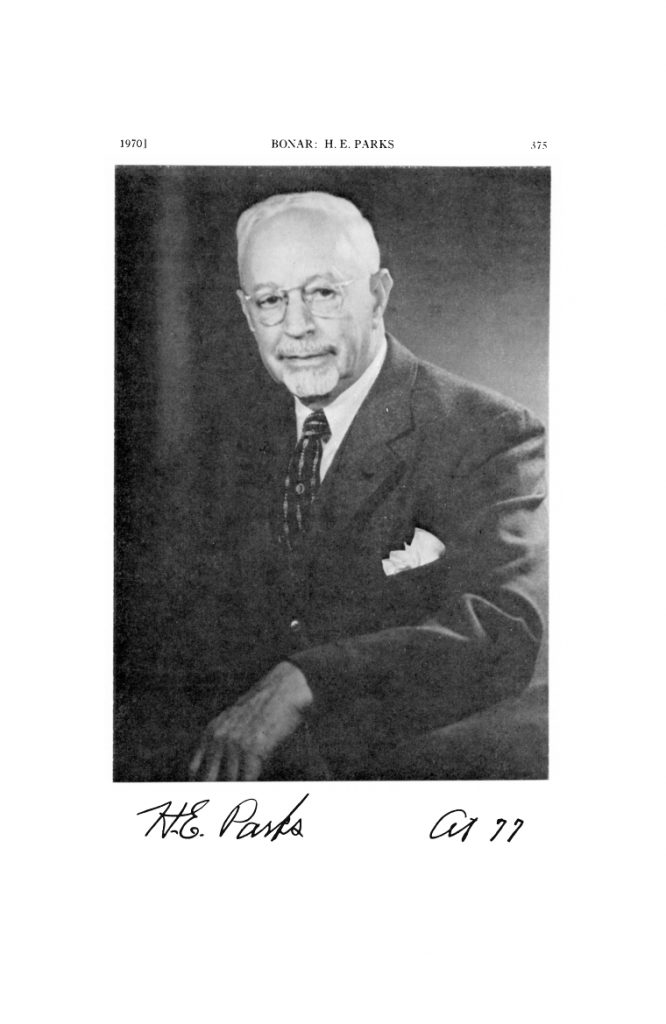 The University of North Carolina at Chapel Hill (NCU) curates 3 lichens and about 170 fungal specimens collected by Harold Ernest Parks, who usually signed his specimens as “H. E. Parks”.  Some of the specimens were collected with his friend Joseph P. Tracy, while others were collected with his wife, Susan Thew Parks, or his son, Wendell King Parks.  NCU also curates a half a dozen vascular plants collected by H. E. Parks, but as California has not been a priority for cataloging, it may well be that we have more.

Harold Ernest Parks was born at Albany, Oregon, August 5, 1880.  Some of his early years were spent in Tacoma, Washington.  Following the death of his father the family moved to California in 1890, living in various localities in the San Francisco Bay are while young Harold attended public school.

He became a member of the California National Guard in San Rafael, and his unit was mustered into federal service as part of “K” Company, First California U.S. Volunteer Division, April 27, 1898, and sailed on the transport, City of Pekin, May 28, 1898.  “K” Company participated in the capture of Guam, June 1898, and arrived in the Philippines June 30, 1898, taking part in the battles around Manila and the capture of the city, August 13, 1898.  The company continued service in that area during the Philippine Insurrection and Parks was wounded in action, February 28, 1899.  He served later that year on Negros Island and was discharged from the Army, September 21, 1899, at San Francisco.

He moved to Tacoma, and worked as a salesman for H. J. Henry and the National Biscuit Company from 1900 through 1910.

While in Tacoma he married Bessie A. Reynolds.  Three sons were born to this marriage:  Robert Wayne, Wendell King, and Laurance Dale.  The family moved to Santa Cruz, California, where Parks worked a a mill worker and salesman until 1914, when he went to San Jose, California, as a special clerk in the Post Office.  Mr. and Mrs. Parks were divorced in 1924.

During these years in California Parks took a number of courses in language and business training from the International Correspondence School of Scranton, Pennsylvania.  Also during this period he developed an interest in the study of plants, especially certain groups of fleshy fungi.  He wrote letters of inquiry seeking advice from professional men and finally settled on a program of research in fungi with W. A. Setchell as advisor and authority to who he submitted collections for identification.  Parks soon developed an especial interest in the collection and study of the hypogeous fungi of his area.

During the period 1916 to 1921 he collected, traveling by bicycle, in the hill areas west of San Jose.  All his free time was devoted to collecting, compiling notes, and sending out collections…

With the encouragement of W. A. Murrill and Setchell, Parks wrote two papers on fungi during this time:  Notes on California Fungy (Mycologia 9:  10-21. 1919), and California Hypogeous Fungi — Tuberaceae (Mycologia 13: 301-314. 1921).  He also wrote, with suggestions and advice from certain zoologists, a paper relating to the habits of the wood rats and their use of hypogeous fungi as food:  The genus Neotoma in the Santa Cruz Mountains (J. Mammology 3: 241-253, 1922).

Setchell once said that this man Parks bombarded him with so much work that he decided that he had better try to get him to come to Berkeley and work for the Botany Department.  On August 23, 1921, Setchell offered Parks a position as helper and general handy man at a salary of $150 per month; Parks served as technical assistant from September 1, 1921 through June 30, 1922.

His extensive general knowledge of field botany made Parks a very valuable employee of the department… Parks became known as an outstanding student and collector of hypogeous Gasteromycetes and contributed very extensive amounts of material to S. M. Zeller and C. W. Dodge for some twenty years, starting in 1918.  He collections are repeatedly cited in their monographic studies published in the Annals of the Missouri Botanical Garden.

Parks had extensive experience in collecting during several summer trips to certain Pacific Islands.  He went as assistant to W. A. Setchell on the University of California – Carnegie Institution Expedition to Tahiti, May 16 – July 19, 1922.  With W. A. Setchell, C. B. Setchell, J. E. Hofmeister, and J. M. Ostergard on an Expedition to the Tonga Islands under the auspices of the Bernice P. Bishop  Museum, May 31 – August 23, 1926.  Parks spent most of his time in a botanical survey of Eua Island.  During the summer of 1927 he made a collecting trip to Fiji as Research Associate of the Bishop Museum.

He was married to Susan Priscilla Thew in October 1927.  They made a trip, on their own, May to July 1930, to Raratonga and the Cook Islands…

During 1931 the Parkses became established in a home overlooking the Pacific at Trinidad, Humboldt Co., California.  This was an area little known mycologically, and Parks continued his botanical work in this area for twenty-two years.  He formed a close working relationship with another enthusiastic botanical student, Joseph P. Tracy (UC [University of California at Berkeley] ’03) of Eureka, California, and the tow very often collected together to advantage, since Tracy was well-known for his studies on the higher plants of that region.  Parks collected fungi generally, but his emphasis was on parasitic fungi and all sorts of micro-fungi.  His series of collection numbers of California fungi reached approximately 9000; these were almost all sent to the University of California Herbarium [UC].  This material came with a goodly portion of it already identified, and was collected, when possible, in sufficient quantity to make distribution of sets of 25-30 duplicates.  The fact that Parks collected 696 of the first 1225 sets of Fungi of California distributed by the University of California Herbarium exemplifies the extent of his contributions…

The Parkses became well-known and active members of the community in the Trinidad and Eureka area and many visitors enjoyed the hospitality of their pleasant home.  With advancing age and increasing health problems they disposed of their home in 1953 and spent the remainder of their time in traveling, living in guest hotels and health resorts.  Parks died after a protracted illness at Calistoga, California, March 5, 1967.  His wife, Susan Thew Parks, followed him in death on January 29, 1968.  They are buried at Visalia, California.  The University of California Herbarium owes much to the numerous contributions of Harold Ernest Parks.