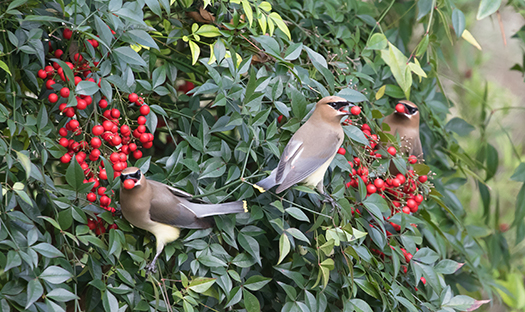 In 2010, two veterinary pathologists reported on the deaths of dozens of cedar waxwings (Bombycilla cedrorum) in southern Georgia in the United States. Upon performing necropsies, they found that the birds had consumed nandina berries (sacred bamboo or heavenly bamboo; Nandina domestica), a commonly cultivated, ornamental shrub native to China and Japan. The birds had tissue damage consistent with cyanide poisoning, which the pathologists presumed came from the nandina berries, even though there were no published analyses of the berries showing that they contain cyanide.

Fast forward ten years, Carol Ann McCormick, the Herbarium’s curator, found several dead cedar waxwings on the UNC Chapel Hill campus within sight of a large planting of nandina. The time was right to determine directly whether nandina berries contain cyanide. Starting in February of 2021, over the next twelve months, Scott Zona, a research collaborator with the Herbarium, performed monthly tests for cyanide on leaves and berries from 11 plants cultivated on the UNC campus and in private gardens in Chapel Hill and Hillsborough.

Putting Nandina to the Test
The results were surprising. The leaves of nandina are indeed highly cyanogenic (cyanide-producing) throughout the year. Green, unripe berries, which are found on the plants in July through October, are also highly cyanogenic. Both leaves and green fruits rapidly release large quantities of cyanide when damaged or consumed. The situation with red, ripe fruits is more complicated. They can be cyanogenic, but they release cyanide slowly. Moreover, if they remain on the plant for two or more months, their toxicity naturally wanes. Old fruits are only slightly toxic or even nontoxic, producing little or no detectable cyanide.

Are nandina fruits hazardous to birds? The answer: sometimes and only to some birds. They pose no threat to most birds that eat one or two berries, because all birds can detoxify small quantities of ingested cyanide. The berries are a threat to cedar waxwings because of the feeding behavior of these birds. In winter, cedar waxwings greedily swallow large numbers of fruits in a single feeding bout. A flock of cedar waxwings can strip the fruits from a nandina bush in minutes, but as the fruits are digested, they slowly release cyanide in quantities that overwhelm the birds’ ability to detoxify it.

What You Can Do
The best way to prevent cedar waxwings from poisoning themselves on nandina berries is to remove nandina from your garden and replace it with their preferred native food plants, such as eastern red cedar (Juniperus virginiana). Another option is to grow non-fruiting cultivars, of which many are available. Vigilant removal of fruits before they become ripe is a third option. These management techniques will also prevent nandina from escaping and invading natural areas. Nandina is classified as an invasive species in North Carolina and other states in the Southeast.

A copy of the study of nandina fruits, published as “Fruits of Nandina domestica are (Sometimes) Cyanogenic and (Sometimes) Hazardous to Birds,” is available here.