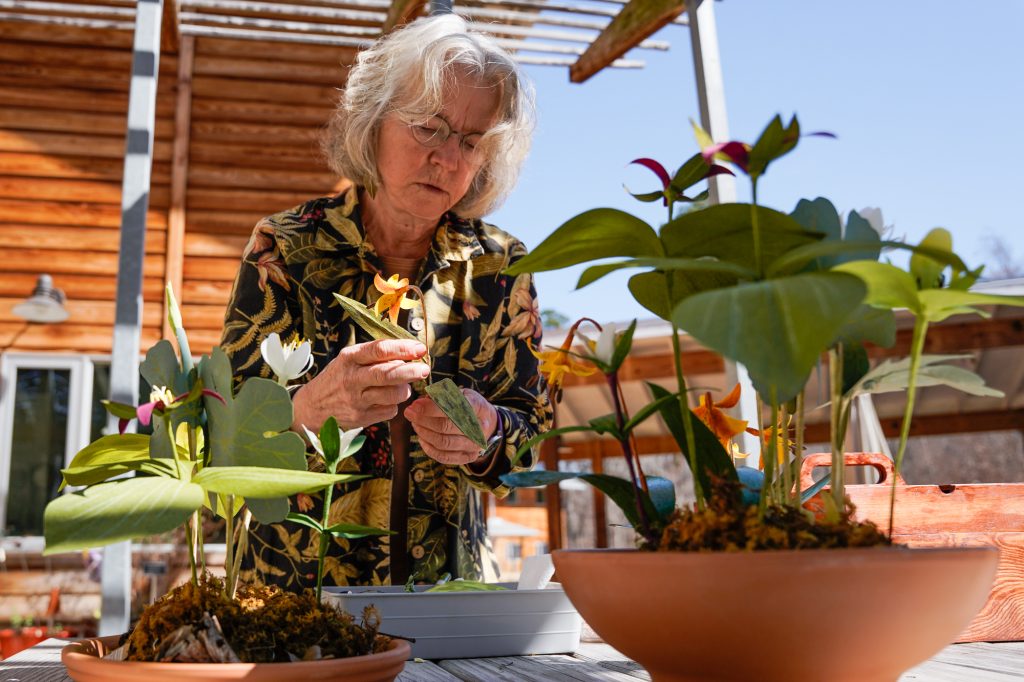 Cynthia Woodsong volunteers at the North Carolina Botanical Garden – but not by weeding, propagating or clearing trails. Instead, she creates paper flowers and donates them to the Garden Shop or Garden educational programs.

“I put myself through school, working as a florist,” she said. Woodsong was 17 when she became a floral designer. Now she is 67, and her love of flowers has not waned.

“I just loved looking at them and arranging them in flower arrangements.” The paper flowers are replicas of native plants found in North Carolina, including pitcher plants, trout lilies, and Venus flytraps. She is a student in NCBG’s Botanical Art & Illustration program, which helps her strengthen her art.

“I really want to make these as true to life as possible,” she said. To do just that, Woodsong observes the plants in their natural habitat.

“I realized that I’d got the colors wrong in the [trout lilies] that I had made for the Garden,” she said. “I was working just from photographs and written botanical illustrations. But once I saw them I realized, oh the leaves [are wrong].”

To improve the paper flower’s accuracy, Woodsong gives the replicas what she calls, “cosmetic surgery”, which involves replacing the leaves and other parts of the paper flower with materials and colors that better reflect its appearance in real life.

She started dipping the paper trout lilies in powder, so that if someone touched them, they would get “pollen” on their fingertips, just like they would if they were real.  After visiting the Green Swamp Preserve to observe Venus flytraps in their native habitat, Woodsong decided to modify the way she created their trigger hairs. Woodsong hopes the accurate replicas can be used for educational purposes, especially when the flowers are not in bloom. For example, Venus Flytrap replicas can be passed around a room full of children during programs such as Camp Flytrap. They can be touched and observed without concern about accidentally breaking a vulnerable plant.

She also hopes the replicas can be accessible. Woodsong was approached by a customer who wanted to give a bog garden to her neighbor, who could no longer explore the Green Swamp due to some medical problems.

“I was just thrilled to think that somebody who can’t go out into nature and see the things, now he’s got one in his house,” she said.

The paper flower journey began five years ago, when a friend brought Woodsong an instructional book on how to make paper flowers.  She had prior experience with paper crafts, but not paper flowers.

To make the paper flowers, she uses German and Italian Crepe paper and handmade Japanese paper, which come in a variety of colors.

“Crepe paper has less of a vein,” she said. “ I’m trying to make these botanically correct … some leaves have very hard to see veins…So I buy a Japanese paper.” Japanese paper is not stretchy, which is better suited for flatter leaves. She uses different types of scissors and a variety of glues, cosmetics, paint brushes, floral wire tape, pastels and beauty blenders to create her work.

It takes her 45 minutes to make one Venus Flytrap pot and 30 minutes to make a pitcher plant pot.  In an effort to not undercut fellow artists, Woodsong takes time into consideration in helping the Garden come up with a price for the paper plants. Woodsong only asks for a small percentage of the profit to reimburse herself for the clay pots the paper flowers sit in, the rest of the profit benefits the Garden.

“You know, when people retire, they often do lots of volunteer work,” she said. “And so this is my volunteer activity. It’s nice. It’s nice to have something that I love doing.