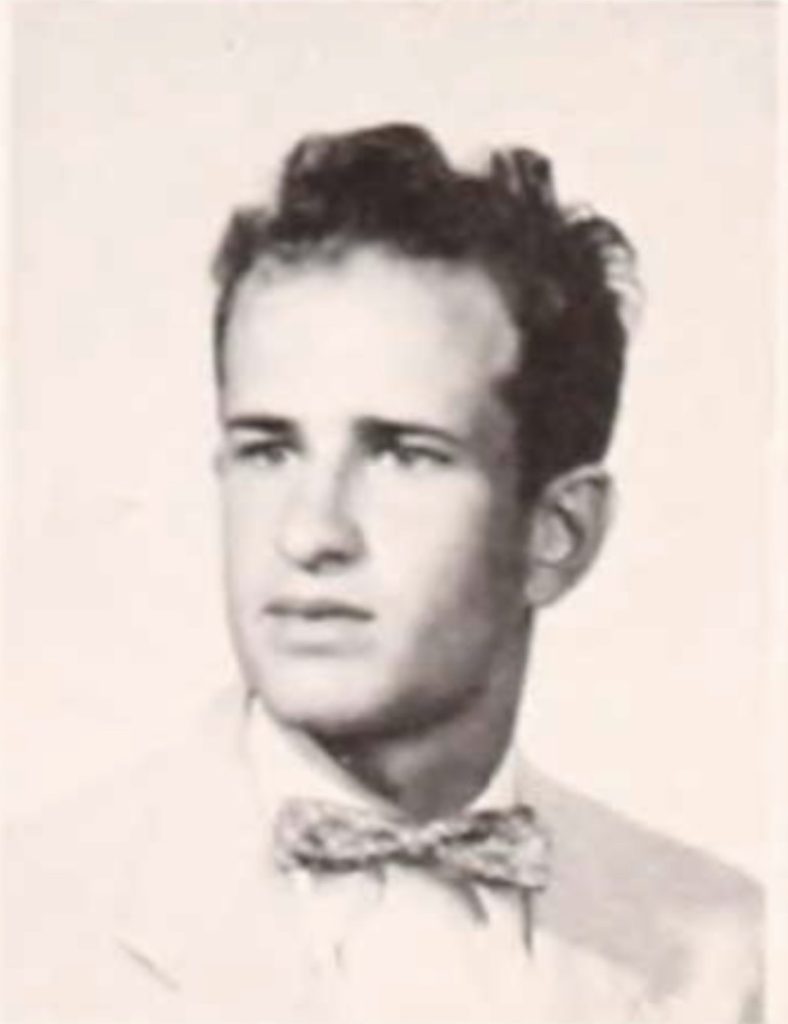 The University of North Carolina at Chapel Hill Herbarium (NCU) curates at least 665 specimens of vascular plants collected by Michel G. Lelong.  Without doubt more will be found as we continue to catalog our collections.  Lelong’s specimens are held by many herbaria across North America. Both the University of South Alabama (USAM) and Troy University (TROY) curate substantial numbers of Lelong’s collections.

Michel Georges Desire Lelong was born in Casablanca, Morocco (at that time a colony of France) on 20 March, 1932 to Charles and Marie-Louise Lelong.1 In 1951, at the age of 19, he immigrated to Coushatta, Louisiana. 2   In June of 1951 he began his undergraduate studies at Northwestern State College of Louisiana in Natchitoches, Louisiana.7  In the 1953 yearbook from that college Lelong is listed as a second year student majoring in Agriculture and member of the “N” Club.  “The “N” Club is an Athletic organization whose membership consists of those men who have lettered in any  one of the four major sports or in any one of the three minor sports,” and judging by the photographs of club members in action pool seems to have been considered a major sport.6  In 1954 he joined the United States Army and applied for US citizenship in October of that year.3  He earned his undergraduate degree B.S. in Agronomy (with a minor in Biology) from Northwestern State College of Louisiana on January 28, 1959.   He continued his studies at that institution and earned Master of Science in Botany on 31 May, 1960. 7  The title of his Masters Thesis was “Phenological and distributional investigation of the grasses on certain tertiary formations in northwestern Louisiana”.  Lelong earned his doctorate in 1965 with Dr. Richard Pohl at Iowa State University.  The title of his dissertation was “Studies of reproduction and variation in some Panicum subgenus Dichanthelium”.

Brian R. Keener, The University of West Alabama (UWAL):  Perhaps Dr. Michel Lelong will be most widely remembered for his work in grass taxonomy, particularly in the genera Panicum and Dichanthelium.  However, it is possible that Dr. Lelong’s most lasting legacy, at least regionally, was through his discoveries and collections from extreme southern Alabama.  In the late 1960s, he joined the faculty at the newly created University of South Alabama in Mobile.  This appointment afforded him the opportunity to become a resident botanist in the outer coastal plain of Alabama, a residency not duplicated since the time of Charles Mohr in the late 1800s.  Dr. Lelong was able [to] visit the natural environs of Baldwin and Mobile counties long before the massive developments and habitat destruction of today’s time took place.  He made the most of this opportunity by doing what he loved, exploring, collecting, and building the herbarium he established at the University South Alabama (USAM).  From these activities he helped to greatly expand our current knowledge of the botanically unpredictable Alabama flora.  There are over 6,300 specimens collected by Dr. Lelong in the Alabama Plant Atlas (floraofalabama.org) which are mainly curated at the USAM Herbarium with duplicates at other institutions.  His specimens include many first state records, rediscovered species that had not been seen since the 1900s , and in some cases, the last known record from the state.  These specimens prove invaluable for me and others as research continues into the plant biodiversity of Alabama.  I am thankful for the opportunity to have spent some time with Dr. Lelong when we were working as coauthors on the Annotated Checklist of the Vascular Plants of Alabama (Kral et al. 2011), the first comprehensive list for our state in over 100 years.  The expertise and professionalism he brought to the table were extremely admirable and commanded deep respect from all of the coauthors. He will be missed.

Robert W. Freckmann, University of Wisconsin-Stevens Point:  I met Michel Lelong in 1962 when I arrived at Iowa State University as one of Richard Pohl’s graduate students.  Mike had been working for about two years on the taxonomy of Dichanthelium, at that time regarded as a subgenus of Panicum, for his dissertation.  All Dr. Pohl’s graduate students knew when the arrived that they were going to work on some grass genus to be determined by him.  He decided that Mike and I should divide Dichanthelium between us.  Because Mike had several years of field experience with the very difficult hairy species, he agreed to concentrate on those, leaving the relatively easier ones for me.

Mike knew much more about Dichanthelium at that time than I did.  No one could have been more patient and helpful than Mike as I tried to learn the existing taxonomy of the group along with his insights.  In May 1963 we took a three-week field trip in the southern states to collect specimens.  One of our first stops was a cut-over woods in northern Arkansas where we collected 15 taxa (as circumscribed by Hitchcock and Chase) plus putative hybrids of Dichanthelium.  That stop along impressed me with how difficult a taxonomic revision of the group would be and how ell Mike knew them… Working together with Mike had always been among the most enjoyable professional experiences I have ever had.

The family of Dr. Michel (“Mike”) Georges Desire Lelong asks for your prayers of comfort as they grieve his passing.  Mike is survived by his devoted wife of 60 years, Marilyn Lelong; by his loving childred, Monique (Steve) Baker, Caroline (Robby) Tucker, and Marc (Alexandra) Lelong; and by his adoring grandchildren, Michaela Baker, Camille Tucker, Robert Tucker, Leo Lelong and Lucien Lelong.  He is also survived by his sister Chantal (Jean-Marc) Crombe, and his brother Philippe (Anne) Lelong.  He is preceded in death by his parents, Charles and Marie-Louise Lelong, his sister Marie-Jeanne Pinet, his brother Georges Lelong and many other treasured relatives in the US and in France.

Before he was the beloved “Grandpere” of our family, he was born in Casablanca [Morocco] and raised in North Africa.  After immigrating to Louisiana, and after serving honorably in the United States Army during the Korean War, he became a naturalized citizen of the United States.  He discovered a fascination with plants, attended Northwestern University in Natchitoches [Louisiana] and earned his Ph.D. from Iowa State University.  A renowned and esteemed Professor of Botany, he taught at the University of South Alabama for 36 years earning Professor Emeritus status.

He had a brilliant mind, a gentle nature, and amazingly expansive vocabulary, and a fantastic sense of humor.  He gave generously of his time for many worthy causes including the Birmingham Botanical Gardens and was a founding member of the Mobile Botanical Gardens.  A longtime member of Corpus Christi Catholic Parish, he was a devout Christian and the most kind and wonderful man in every way.  He will be greatly missed by family, friends, colleagues, and former students throughout the world.  In lieu of flowers, the family requests donations be made in his honor to Catholic Charities of Mobile, AL or The Mobile Botanical Gardens.