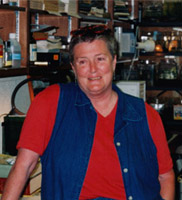 The University of North Carolina at Chapel Hill Herbarium (NCU) has cataloged approximately 240 vascular plant specimens collected by Rebecca Deramus Bray.  We will likely find many more as we continue to catalog our collections.  Most of our specimens date from the 1960’s when she was a student at the University of Alabama.  Recent specimens were co-collected with Dr. Kerry Heafner for their studies on Isoetes.

Rebecca Deramus Bray earned a B. S. in 1961 from the University of Alabama.  She continued with graduate studies at that same institution.  The title of her 1963 M.S. thesis was “Studies on the cytology, vegetative anatomy and morphology of the genus Gardenia.”  The title of her 1970 doctoral thesis was “Studies on the flora of the vascular plants of Dauphin Island, Mobile County, Alabama.”

Ca. 2015 Dr. Deramus Bray retired as the manager of the herbarium at Old Dominion University (ODU) in Norfolk, Virginia.  She died in Hillsborough, North Carolina on 21 January 2018.

Obituary written by Rob Bray, son of Rebecca Deramus Bray:
Surrounded by family, Dr. Rebecca Deramus Bray peacefully passed away on January 21, 2018.  Rebecca was born to the late Harvey T. & Garnet M. Deramus on May 23, 1939 in Birmingham, Alabama.  Rebecca grew up in the Forest Park neighborhood of Birmingham and graduated from Brook Hill High School.  She graduated from the University of Alabama with a doctorate in Botany where she was a member of many academic and social organizations.
Dr. Bray retired as a member of the Biological Sciences Department faculty at Old Dominion University in Norfolk, Virginia and as the curator and manager of the ODU herbarium in 2015.  She was an accomplished botanist with research resulting in many publications during her career.  Dr. Bray was a beloved professor known for “offering welcome advice or swift kicks, whichever the situation demanded,” to the undergraduate, graduate, and doctoral students she guided & mentored.  Additionally, she served the academic community through leadership and participation in many academic organizations including the Virginia Academy of Science, Botany Section, and Flora of Virginia Advisory Board and through donation of herbarium specimens to the University of North Carolina and others during her career.
Rebecca was a member of numerous civic & community organizations and volunteered thousands of hours of service to many organizations, including Sentara Norfolk General Hospital, the Feldman Chamber Music Society, and was inducted into the Kappa Delta Sorority White Rose Circle.
Rebecca was the beloved wife of the late Robert N. Bray of Chesapeake, Virginia and sister of the late Dorothy D. Boyd (Frank) of Mountain Brook, Alabama.  She is survived by her child, Robert D. Bray (Lori) and her grandchildren, Robert T. Bray and W. Alexander Bray, all of Hillsborough, North Carolina, Rusty Boyd (Gina) and Beff Boyd King (Duane) both of Birmingham, Alabama, as well as several other loving family members.
… In lieu of flowers, donations may be made in memory of Dr. Rebecca D. Bray to the Flora of Virginia Project (http://floraofvirginia.org/ ).