The University of North Carolina at Chapel Hill Herbarium (NCU) has cataloged 153 fungi and 1 lichen collected by Jacob Frederick Brenckle, who usually signed his collections as “J. F. Brenckle.”  Many specimens belong to “Fungi Dakotenses,” an exsiccati which contains about 675 specimens; it is unclear whether NCU owns a complete set.  A favorite collecting location of Dr. Brenckle’s was Kulm, North Dakota.

It is unclear whether NCU curates any vascular plants collected by Dr. Brenckle, as the Dakotas are outside our geographic focus for current cataloging efforts. 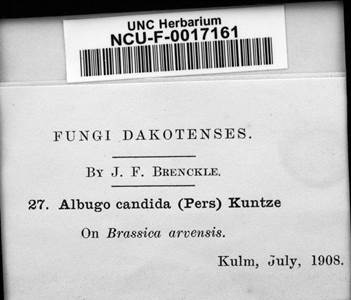 An example of a specimen label from Fungi Dakotenses
collected by Dr. Jacob F. Brenckle curated by NCU

All NCU fungi, including those collected by J. F. Brenckle, can be found at mycoportal.org  .

Dr. Brenckle’s papers are curated by the University of South Dakota in Vermillion, SD.  “The Jacob F. Brenckle papers consists of correspondence, notes, and pamphlets, collected from 1906-1930.   All of the correspondence was received by Brenckle; most at Kulm, North Dakota, but some at Camp Pike, Arkansas. Brenckle corresponded with academic and   amateur scientists from all over the United States, as well as Germany, Italy, France, and the Netherlands. While topics focus on mycological collection and identification of Great Plains species, there are a few manuscripts on raising bees. The collection also offers valuable insight into the lives and work of academics in the early 1900’s, and contemporary thoughts on World War I.”2

“Upon completion of high school in Milwaukee [Wisconsin], Jacob Brenckle entered Milwaukee Medical College and later transferred to Northwestern Medical College where he was graduated in 1898.  In 1901 he married Amalie Boll [1875-1944] in Milwaukee.  They were the parents of three children, Arthur (at the time in Greeley, [Colorado], Dakotah (Mrs. Guy Le Fevre), and Mrs. Beatrice Davis [b. 1909], both from Northville [South Dakota].

Dr. Brenckle began his medical career in Webster, South Dakota, where he practiced one winter, then moved to Kulm, North Dakota.  During World War I, he enlisted in the Army, spending one year at [the War Prison Hospital3,4 ] Fort Douglas, Utah, and the remainder at Camp Pike, Arkansas, returning to Kulm after the war.  In 1923 he moved to Northville [South Dakota], where he stayed until the early 1930’s, then moved his practice to Mellette [South Dakota].

In botany Dr. Brenckle was recognized throughout the world as one of the leaders in that field, being credited with the discovery of two new flora species in South Dakota.

A banquet was given in his honor and a medal presented to him by the South Dakota Medical Association in recognition of his 50 years in the profession…  Other interests and accomplishments of Dr. Brenckle over the years were:  building a home and office of stone in Kulm, North Dakota, developing a formula which he used to combat diphtheria, trapping and banding birds for the U.S. Biological Survey [sic; U.S. Geological Survey], and raising honey bees.  A box of comb honey which he entered in a national contest won first prize and was presented to the Coolidge’s while they were in the White House.” 1

Many taxa were named in Jacob Brenckle’s honor, including the fungal genus Brencklea named by Austrian mycologist Dr. Franz Petrak (1886-1973).  Sadly, this genus has been subsumed into Scolecosporiella.

Species (or varieties) named in Jacob F. Brenckle’s honor include:

Septoria astragali var. brencklei Sacc. (Pubished as ‘brinklei’ in Atti Memorie Accad. Patavina 33: 171. 1917.)  Some scientists currently recognize the variety; others do not and subsume it into the parent taxon.

Jacob Brenckle’s daughter, Beatrice May (Brenckle) Davis (b. 1909) was a scientist in her own right, and wrote “A study of the microflora of Fargo Clay Soil,” to earn a Master of Science degree at North Dakota Agricultural College (now North Dakota State University) in 1932.

4.  “During World War I, the fort was used as an internment camp for German citizens who lived in the United States, and it was also a POW camp for Imperial German Navy prisoners. One of the crews kept there was from the SMS Cormoran, which had left the German colony of Tsingtao, China, at the beginning of the war and stopped at Guam in December 1914 to refuel and take on provisions. Denied the coal needed for their boilers, the German captain reluctantly submitted to detention. When the United States entered the war on the Allied side in 1917, the crew were made prisoners of war and were sent to Fort Douglas.”  https://en.wikipedia.org/wiki/Fort_Douglas#Sources  accessed on 22 Jan 2023