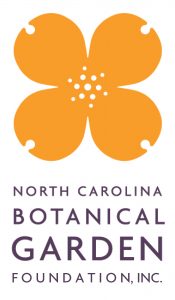 In 2016, The Botanical Garden Foundation, Inc. (BGF) celebrated the 50 anniversary of its establishment and chartering together with the 50th anniversary of NCBG’s trail-opening to the public, an expression of their shared history and partnership.

The BGF officially began with the Articles of Incorporation, signed on January 25, 1966 and notarized on March 25, 1966. It is a private, 501(c) (3) non-profit organization that supports NCBG financially, advocates for NCBG, provides for the association of members, and holds and protects land for conservation as a land trust. It is also an Associated Entity of the University of North Carolina at Chapel Hill (UNC).

In 1961, NCBG Advisory Board member William Lanier Hunt led the effort to form the Botanical Garden Foundation. The goal was to have this new organization be a base of financial support for NCBG and to also serve as a “land trust” that could acquire, protect, and manage land for conservation. Many of the original supporters were members of the Botany Department and of the N.C. Wild Flower Preservation Society. Working with Dr. C. Ritchie Bell, a proposed Certificate of Incorporation was circulated for comment in Spring 1965 to Advisory Board members and others, citing three primary BGF purposes: fundraising, land protection, and advocacy.

The Botanical Garden Foundation was incorporated in 1966, followed in 1967 by the first annual meeting. William Lanier Hunt was elected as the first Foundation president at the first meeting.

When Foundation membership invitations were sent to prospective members by William Lanier Hunt in 1967, 291 individuals and 18 organizations became charter members. Four categories of membership were established with annual dues ranging from $2-$100. In December 1967, the BGF bank balance totaled $117.31.

During the period 1966–1988, the BGF fulfilled its purpose, according to Dr. Anders Lunde in his “Notes for a History of the Botanical Garden Foundation” (unpublished draft, written 1987–1988). Lunde concluded by noting, “The story of the North Carolina Botanical Garden and the Foundation is one of great expectations, many frustrations, and impressive achievement.”

In 1969, the BGF received its first gift of land to be preserved as natural habitat—a 15-acre tract on Chesser’s Island in the Okefenokee Swamp in Georgia, donated by Dr. and Mrs. Francis Harper. The tract was retained until it could be transferred to the Okefenokee National Wildlife Refuge.

In its fifty-plus year history, the Foundation’s support and advocacy have increased the viability and visibility of the Garden. Financial support grew from a 1967 bank account with a balance of $117.31 to more than $1 million in annual fundraising income and a $3.66 million permanent endowment (providing $180,000 in investment income to NCBG each year) by 2016. Public support for NCBG started with 291 individual and 18 organizational charter members in 1967; it has grown to more than 3400 individual and organizational members (in mid-2016).

For the full history of the Foundation and the Garden, Read...

One would be hard pressed to walk into any botanical garden in the world and come across a compendium of historical information as complete as this one. What is even more amazing is that this compilation of the Garden’s 50-year history was authored by volunteers! Calling themselves the Greenbriers, this dedicated group of 12, under the able leadership of Joanne Lott, has spent countless hours researching, fact checking, and writing the definitive guide to the first 50 years of the North Carolina Botanical Garden… The Foundation has a four-star overall rating on Charity Navigator.