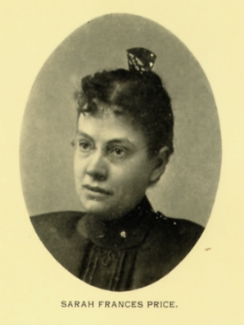 Many specimens curated by MO note “The Sadie F. Price Herbarium bought 1904”.  The Missouri Botanical Garden also curates Ms. Price’s artwork, some of which have been digitized. 6,7

Ms. Price was an all-around naturalist whose interests included plants, birds and mollusks.  Despite her frail health and lack of formal association with any academic institution, she published many articles on natural history in both the popular press and in scientific journals.  She was a gifted artist who illustrated her own publications.  Ms. Price was a frequent correspondent of leading botanists of the day.

Sarah Frances Price, known as Sadie throughout her life, was born in Evansville, Indiana in 1894.  Her father was Alexander Price (1815-1875) and her mother was Maria Morehouse Price (1819-1874). 11, 12.  Her siblings were Frederick S. Price (1843-1879) and Mary Elizabeth Price (b. 1845).12  “The Prices moved to Bowling Green, Kentucky, while Sadie was still quite young.  However, they sent her back to Terre Haute, Indiana, to St. Agnes Hall, a church school run by the Episcopal Church, from which she graduated.  Her father was a successful business man, at least up to the time of the War between the States.  He ran a retail and wholesale grocer business, and the family lived in a fine home on Adams Street in Bowling Green… During the Civil War, Mr. Price found himself in trouble because of his Northern sympathies.  His son served in the Union Army… Just how Miss Sadie became interested in natural history we do not know.  It seems probable, however, that she first became interested in painting, and that she used flowers and birds as subjects.”12

In “The Art and Herbarium of Sadie Price” Cassidy Moody writes, “Sadie Price was born in 1849, and spent much of her childhood in Bowling Green, Kentucky. In her 20s, Price was stricken with a mysterious back ailment that kept her bedridden for a decade. For income, Price began teaching watercolor painting, using birds and plants that students would collect and bring to her bedside.

In the early 1880’s, Price finally sought treatment for her condition, greatly improving her mobility. She no longer led classes bedside, instead taking students on nature study field trips to the Kentucky woods. Price prided herself on always being respectfully attired in full-length skirts, despite the added difficulty in traversing the terrain.

Price appeared to be keenly aware that her activities were outside the normal expectations for women of the day. As a friend described to the Kentucky Warbler after Price’s death, “Miss Sadie thought that men were making fun of her because she had stepped out of the usual role of a woman. She thought they objected to her activities as a naturalist, because she was doing things that only men should do. It was a fixation with her.”

Price began giving lectures on plants, birds, insects, and other nature subjects. She penned several scientific papers and corresponded with other leading botanists of the time. Her artwork also won her public acclaim. An exhibition of her plant and bird illustrations won first prize at the Chicago World’s Fair in 1893.

Price authored several small botanical leaflets, but her best-known work is The Fern-Collectors Handbook and Herbarium published in 1897. The work serves as an index and identification guide to the ferns of the eastern United States, and as Price’s only published work of botanical art. Each illustration was set opposite a blank page, where the reader was encouraged to insert a pressed fern to match.

Just as Sadie Price was achieving notoriety in the field of botany, she died suddenly of dysentery in 1903 at age 54. In one posthumous tribute, Price was lamented as “a true high-priestess of nature.”

… After her death, Dr. Trelease [of the Missouri Botanical Garden] kept in touch with Mary Price [Sadie’s sister]. Through this connection, Trelease acquired Sadie Price’s personal herbarium and plant artwork in 1904—almost 3,000 sheets including nearly 1,000 sketches. Price’s living plant collection was also sent to St. Louis and planted at the Garden.

The plant sketches and pressed plants were added to the Garden Herbarium. Price’s collection of bird and insect artwork was acquired by the Garden in 1908.

In his description of Apios priceana, B. L. Robinson wrote, ““The plant here characterized was discovered some years ago in open woods and thickets near Bowling Green, Kentucky, by Miss Sadie F. Price. After noticing it for several seasons its occurrence and peculiar characters, Miss Price, who recognized its genus and believed it to be a new species, sent it to Professor Charles F. Wheeler of Michigan Agricultural College for further examination…Miss Price reports that the species often fail to set fruit. She has observed that the flowers are visited by the butterfly Eudamus tityrus and by both honey bees and bumble bees, the latter appearing to find the nectarines very difficult to access. The accompanying illustration was drawn from life by Miss Price. It is a pleasure to commemorate in the specific name of this noteworthy plant the work of such a careful observer of the Kentucky flora.”8

John Kunkel Small of the New York Botanical Garden paid tribute to Sadie Price in naming a dogwood in her honor. “Several months since, Miss Sadie F. Price sent me flowering specimens of a Cornus , which she had found growing on river banks near Bowling Green. Later, at my request, she furnished me with fruiting specimens from the same locality. This material is, apparently, not referable to any species thus far described, and may hereafter be known as Cornus priceae.”9

Small honored Price again in 1908 when he named Oxalis pricea in her honor — “Miss Sadie Price, for whom this Oxalis is named, has furnished me with copious material from near Bowling Green, where she has observed this and other interesting species in the field for several years.” 10

Sadie Price was a keen observer of the natural world and sent specimens to the various botanists with whom she corresponded.  She is credited as having been the first person to collect Clematis flaccida Small, Lycopodium porophilum Lloyd & Underwood, and Polyporus juniperus Von Schrenk.