At the North Carolina Botanical Garden, we work with our Foundation to protect over 1,200 acres of land in the Chapel Hill area through outright ownership, management agreements, and conservation easements. Many of these natural areas are open to the public. Find more information below!

A conservation easement is a legal agreement between a landowner and the Garden (or Foundation) in which: (1) the landowner promises to keep the land in its natural conditions, and (2) the Garden is granted the right to monitor the property and enforce the terms of the easement if need be. Because land under easement remains privately held, access to these properties is restricted. 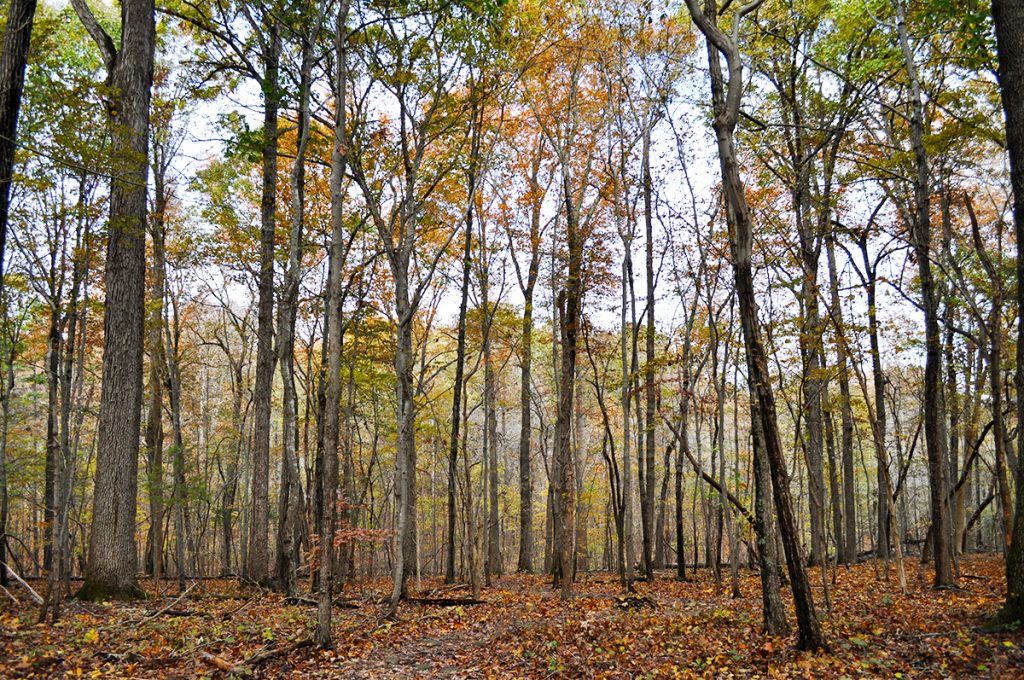 The 127-acre Parker property was a gift to the University from William and Athena Parker in 1976 (but who held a life estate on 5 acres). The Parkers, as well as generations of previous owners, resided in a circa 1830s cabin, also located on this highest spot, that was destroyed by fire in 1995 (after which the Parkers lived in a mobile home). The cabin’s foundation and other features remain intact and retain much archaeological value, and the chimney brickwork pattern reportedly indicated that it was a “safe house” for the Underground Railroad.

Old roads lead down to Mason Farm where several 17th and 18th century home sites occur. The archaeological significance of the former Parker cabin and the nearby home sites was documented in Archaeological and Botanical Survey of Mason Farm Biological Reserve and other lands of the North Carolina Botanical Garden (White, Peter S. and Charlotte A. Jones-Roe 2005). Mrs. Parker liked to tell the story of a regular visitor who lived “half-a-mile down to Morgan Creek,” who perhaps found inspiration to write “Carolina in my Mind” while admiring the view from the Parker cabin front porch.

Sadly, Bill Parker passed away in 1997, followed by Athena Parker in 2002, but their land conservation wishes were ultimately realized. Athena, in Bill’s 1997 obituary, wrote: “We are trying to impress on people that this is an important piece of land. We want to help the university further its conservation effort. The natural beauty is something that should continue to be appreciated.” She continued to speak passionately about the conservation of her land up until her death in October 2002, and in 2012 the North Carolina Botanical Garden was given administration of the property, and christened it the Parker Preserve.

Addition of the Parker Preserve adjacent to the Mason Farm Biological Reserve greatly increased conserved lands that abut the 74 thousand acres of upland around the Jordan Lake. The Parker Preserve also holds significant historical and cultural importance based on the likelihood that Native Americans took advantage of the site’s promontory.

At present, a single-track and very rugged trail leads from the Parker Preserve to the Mason Farm Biological Reserve loop trail. Additional foot trails are planned within the Parker Preserve. A small parking area is located at the intersection of Parker Road and Rhododendron Drive. The mesic and alluvial forests on the west-facing slope of the Preserve have a high diversity of tree species and an abundant display of spring wildflowers. The uplands, once used to graze horses and cattle, is now an open field with scattered red cedars, providing a view of the slopes surrounding the bend of the river. The remains of the historic Cameron’s Mill, built in 1836, are located on the eastern border of the Preserve. The Preserve also provides an excellent site for individuals wishing to explore a natural and historic landscape. The Coker Pinetum is approximately 25 acres of wooded terrain that links the UNC campus with the Garden. A pinetum, by definition, is a collection of pines or conifers that is particularly used for their scientific study. Few pines remain in this particular site, however, but some of the remnant trees are quite old and retain resin-tapping scars. Meeting-of-the-Waters Creek (mostly confined to buried culverts on the main campus) flows freely from the upper reaches of the Pinetum to its confluence with Morgan Creek.

The Pinetum came to the Botanical Garden as a deeded gift from the estate of botany professor William C. Coker, who used it for teaching and as a living laboratory. According to the deed, the described property shall be used “only for a Botanical Garden and Park area,” and reverts to Coker College in South Carolina if this restriction is violated.

A Campus-to-Garden Trail through the Pinetum extends from a Ridge Road access point to an access point at the Fern Lane and Iris Drive intersection. Diamond-shaped trail markers occur along the nature trail route. The nature trail more-or-less follows Meeting-of-the-Waters Creek. Note that the nature trail is located on very uneven ground that requires four creek crossings. The Gordon Butler Nature Preserve is located in the Sandhills community of Hope Mills just south of Fayetteville, NC, in Cumberland County. This 12.5-acre preserve contains an impressive assemblage of pine flatwoods plants including an amazing collection of mountain laurel flower color variants and the rare white wicky (Kalmia cuneata). This preserve is also the site of a longleaf pine restoration project funded by the U.S. Fish and Wildlife Service Partners for Fish and Wildlife Program.

The preserve, is named for plantsman Gordon Butler of the Butler Nursery near Fayetteville. Butler was a friend of NCBG and a wildflower and native tree and shrub specialist. An active member of the NC Wild Flower Preservation Society (renamed the NC Native Plant Society in 2004), he was an early activist in propagating and encouraging the use of native plants in public and private landscapes. The preserve has been owned by the Foundation and managed by Garden staff since 1997. Often called a “nature wonderland,” it is open to the public but with no official parking. William Coker had built his home on this property in 1908. He named the property “The Rocks” for the rock outcropping on the lot’s south side. William married Louise Venable in 1935. He died in 1953, and after the death of Louise in 1983, a portion of the original property was developed for the public in the area now called The Rocks.

Also known as Highland Pond or Salamander Pond, the 3-acre Edwards Mountain Nature Preserve is located in Chatham County. It was given to the Foundation by William Lanier Hunt and the Governors Club in 1996, and is located within the Governor’s Club gated community. Its significance is as the site of a breeding pool in which salamanders and other amphibians congregate to breed in the late winter and spring—habitat that has become rare in the increasingly developed NC piedmont. Garden staff visit the site at least once per year, but this is one of the few nature preserves where invasive species are not present, and no management is necessary.

The Stillhouse Bottom natural area is the only undisturbed, steep, north-facing ravine left in Orange County according to the Inventory of Natural Areas and Wildlife Habitats for Orange County, NC (2004). Preservation of this site is a conservation priority for the state of North Carolina, Orange County, and the North Carolina Botanical Garden. Over 100 plant species have been identified, and the high quality of the site is demonstrated by the presence of red-tailed and red-shouldered hawks, yellow-billed cuckoos, white-breasted nuthatches, ovenbirds, and scarlet tanagers, and other deep forest birds. Stream quality is likewise demonstrated by the healthy amphibian community, made up of dusky salamanders, two-lined salamanders, and green frogs.

The North Carolina Botanical Garden Foundation seeks to add all available undeveloped properties to the Stillhouse Bottom Nature Preserve through land donation and purchase, and through conservation easements. The undeveloped lots and the existing Stillhouse Bottom Nature Preserve, including potential conservation easements, could ultimately total 100 acres and represent how a group of dedicated individuals can conserve, in perpetuity, a relatively large area of biodiversity significance in a rapidly developing region.

The Stillhouse Bottom Nature Preserve is not open to the public except for occasional, guided tours.

From the 1960s into the 1990s, William Lanier Hunt donated over 100 acres of land to the North Carolina Botanical Garden, including several beautiful rhododendron bluffs located in a gorge along Morgan Creek. The purpose the William Lanier Hunt Arboretum is to protect natural areas and conserve a collection of the diverse woody plants of the southeastern United States. Upstream of and contiguous with the Hunt Arboretum lies the eight-acre Grey Bluff Garden that also protects the steep slopes along Morgan Creek and another extensive rhododendron bluff.