Walking trails wind through this old-growth forest on the edge of the UNC campus. On the southwestern corner of Battle Park, you can explore the Koch Memorial Forest Theatre, a stone amphitheater with over a century of history.

Battle Park is open dawn to dusk, 365 days a year. Forest Theatre is also open every day, dawn to dusk, unless in use for an event or performance.

Battle Park and Forest Theatre are located at the corner of Country Club Drive and South Boundary Street in Chapel Hill. Click here for Google Maps directions. Metered parking is available nearby and around downtown Chapel Hill.

The trail system at Battle Park covers several miles as it winds through this 93-acre forest. It traverses uneven and rocky ground, and some trails are steep. View trail map [PDF].

What will I see? 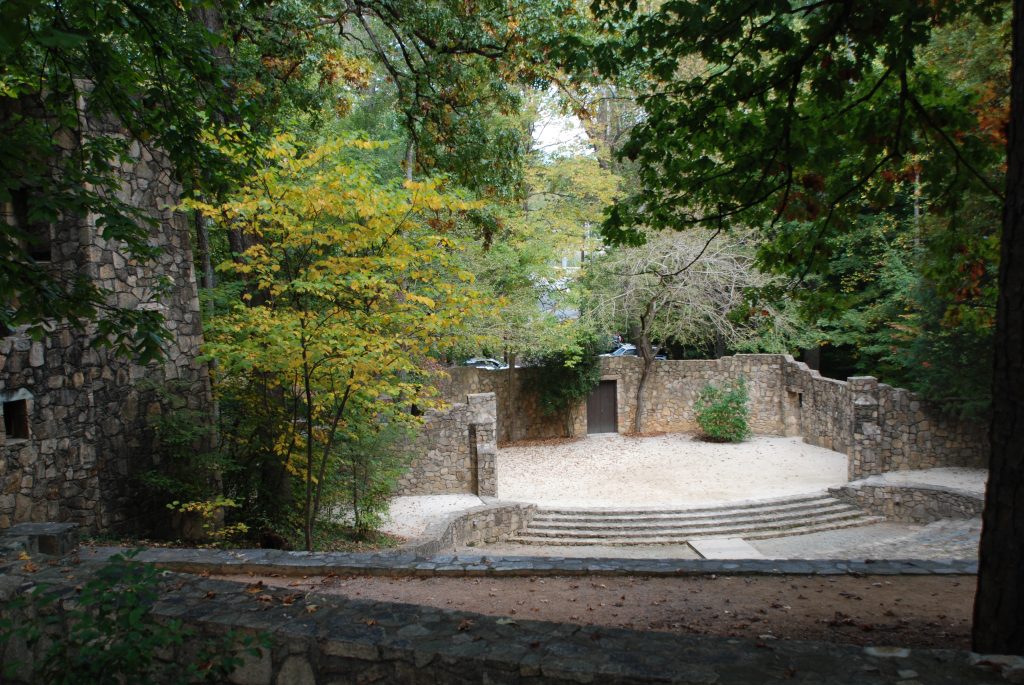 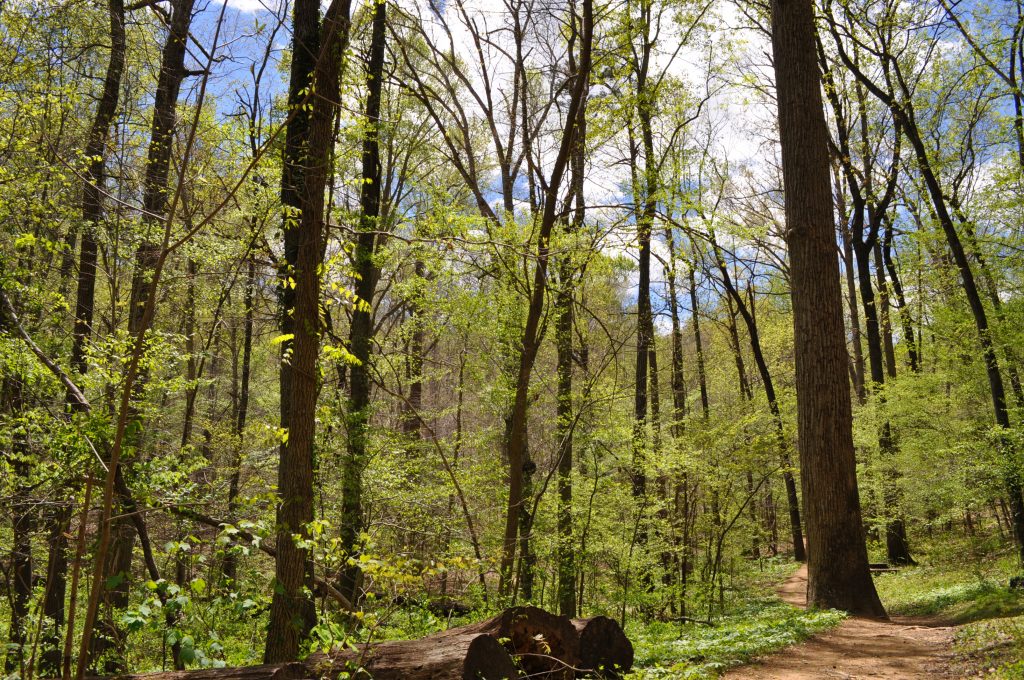 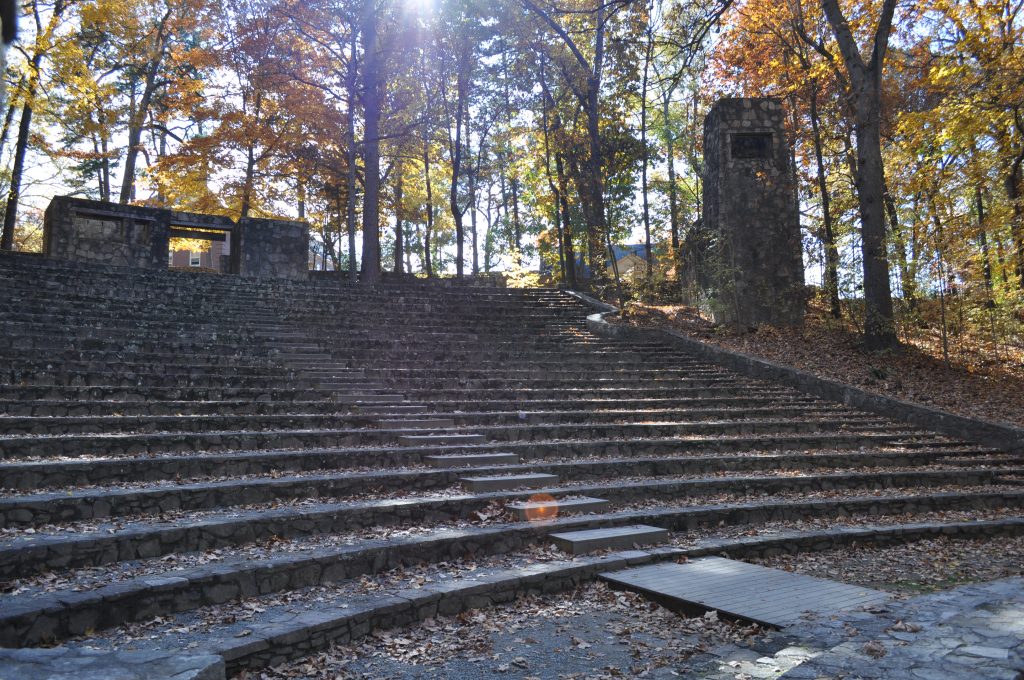 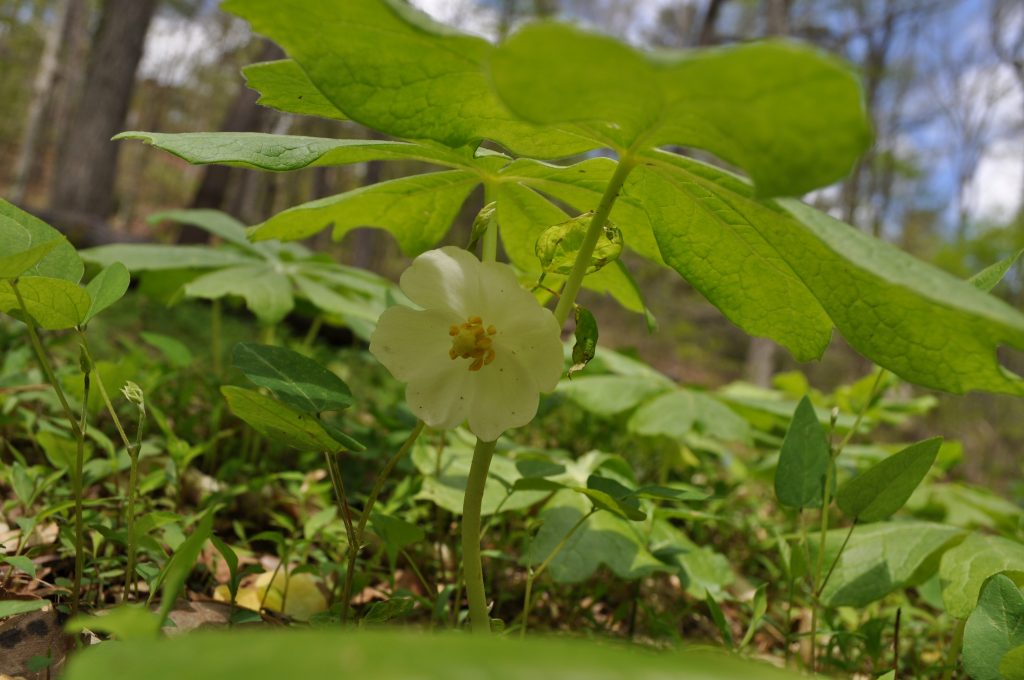 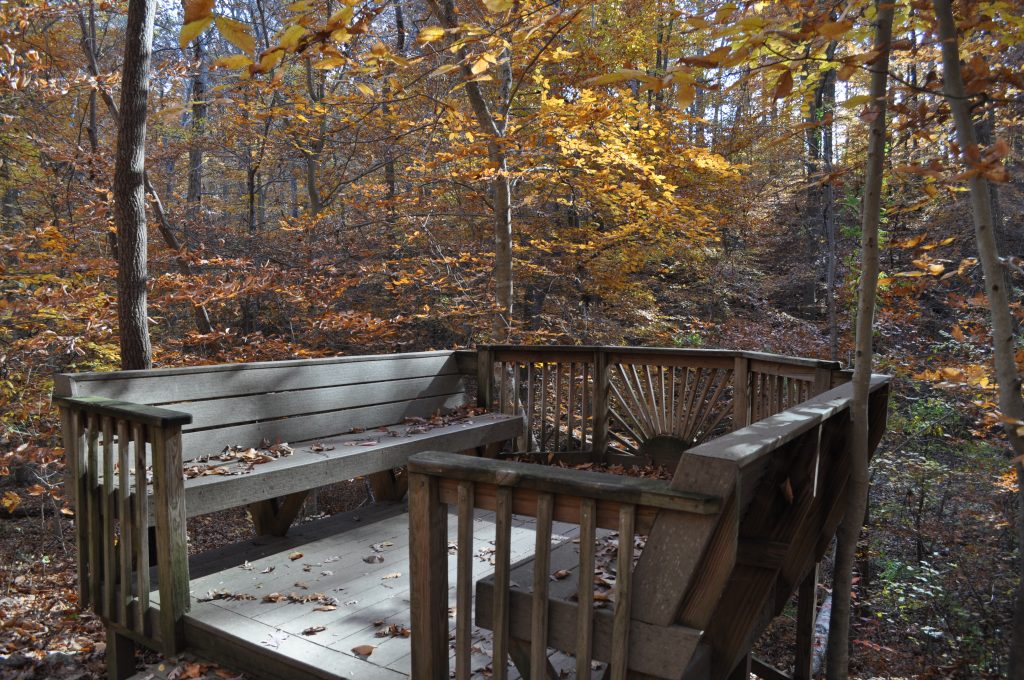 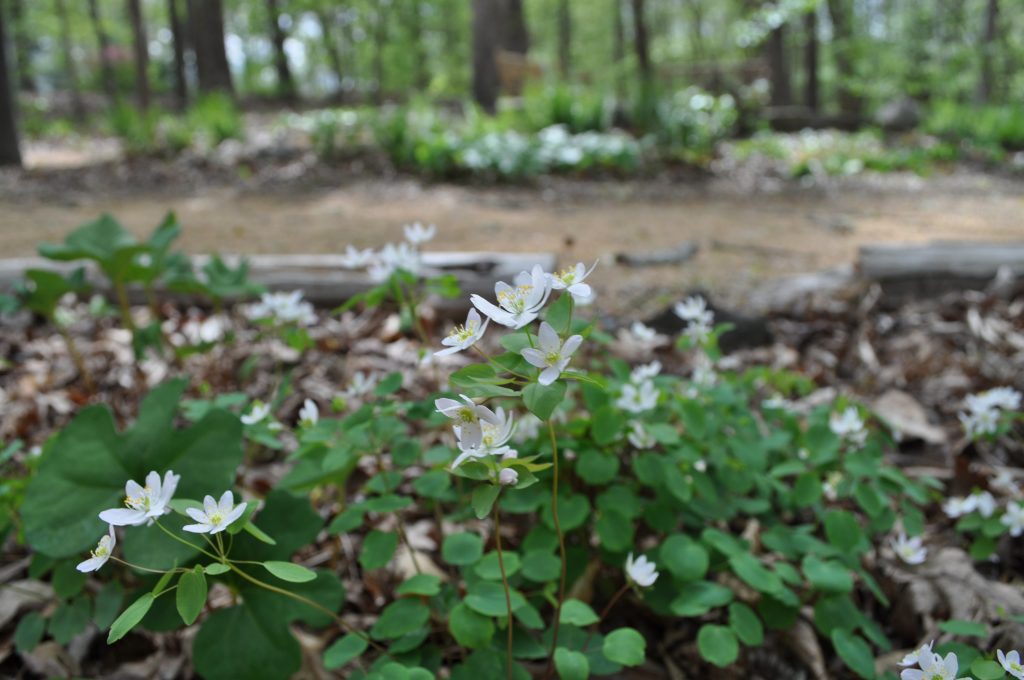 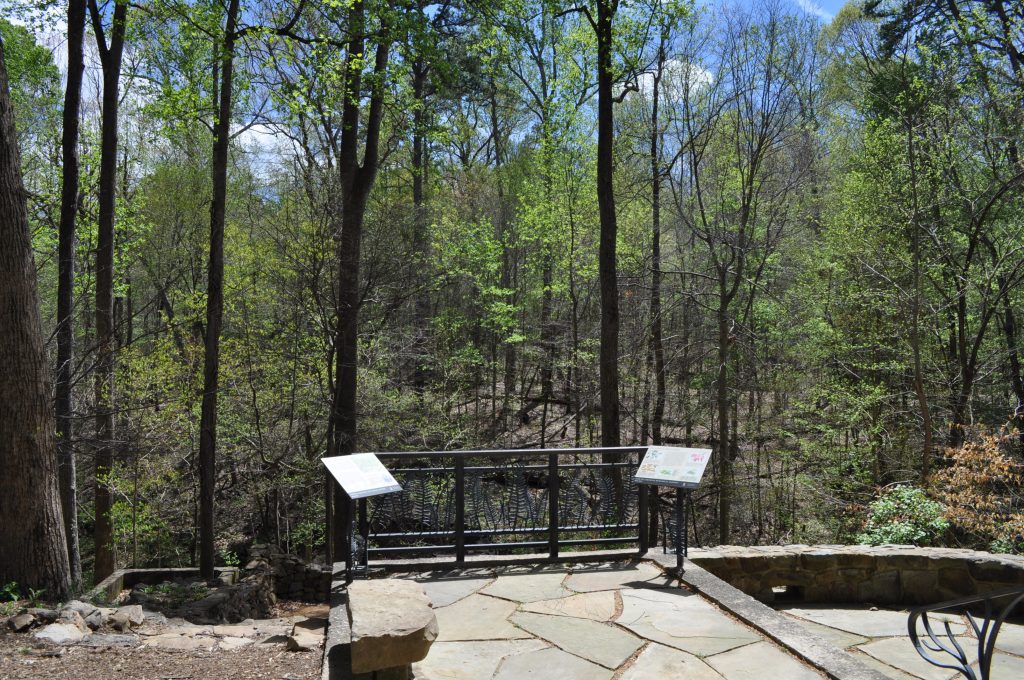 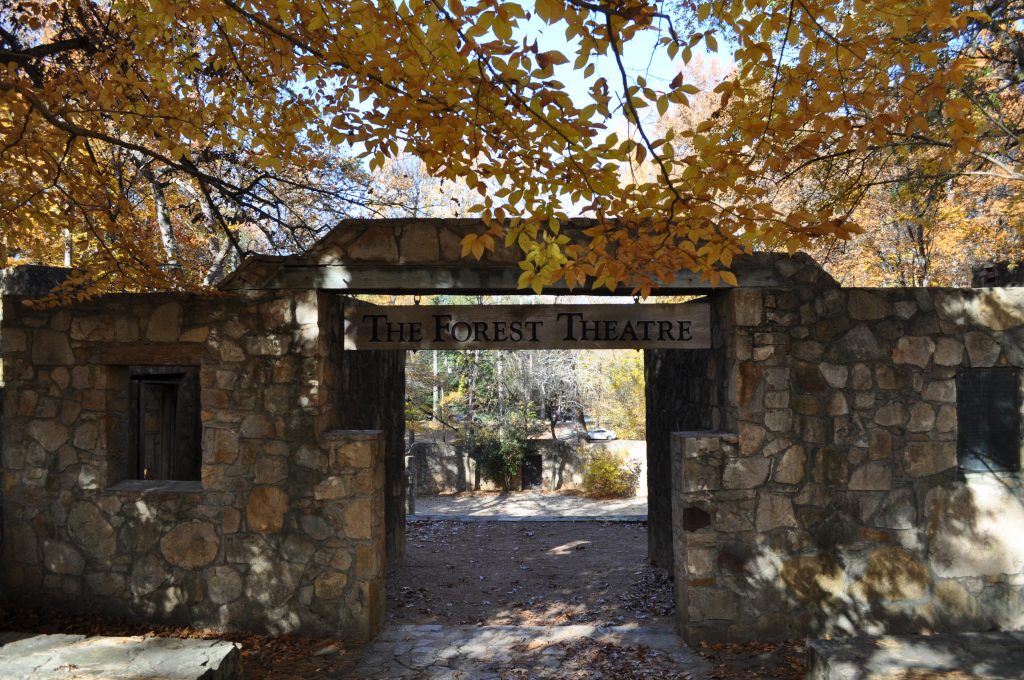 Most of the forest in Battle Park has been growing since before European settlement in the area (1740) – it was never clear-cut. The park is named for Kemp Plummer Battle, president of UNC from 1876 to 1891, who laid out the original trail system and spent many happy and contemplative hours within the forest.

The Forest Theatre is a stone amphitheater structure built into the hillside on the eastern edge of the UNC-Chapel Hill campus and contiguous with Battle Park. Outdoor drama was first performed on this site in 1916 to celebrate the tercentenary of Shakespeare’s death. William C. Coker, botany professor and founder of Coker Arboretum (also under the Garden’s care today), chose the location. A few years later, Professor Frederick Koch, founder of the Carolina Playmakers, developed the location into a permanent theater. The stone stage backdrop and stone terraced seating area of the Forest Theatre was built with Work Projects Administration funds in 1940 and further improved in 1948.

The Carolina Playmakers were a campus-based theatre group that originated in 1918. Founded by Frederick Koch, the Carolina Playmakers became a nationally recognized ensemble with the purpose of developing new playwriting talent. The company played an important role in the development of American folk drama and provided a training ground for generations of theatre artists. Today, the UNC-based PlayMakers Repertory Company carries on the name and traditions of the theatre group that had its beginnings at the Forest Theatre.