Our guiding mission is to inspire understanding, appreciation, and conservation of plants
and to advance a sustainable relationship between people and nature.

The concept of the conservation garden was developed at the North Carolina Botanical Garden in the early 1990s to represent the many conservation-related activities that were at the heart of the Garden’s mission and programs. This included propagating native plants to ensure that populations were not damaged by wild collecting, banking seed for reintroduction and protection against extinction, conserving habitats to preserve naturally occurring biological diversity, and creating gardens that display and demonstrate native biodiversity and sustainable gardening practices.

What do we mean by conservation garden? 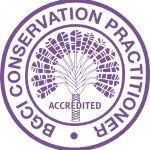 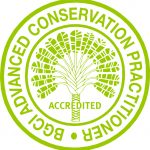 Botanic Gardens Conservation International recognizes botanic gardens with a focus on conservation actions that support local, national or global conservation goals with accreditation as an Advanced Conservation Practitioner. BGCI accreditation ensures that gardens adhere to international standards, results in tangible benefits for participating gardens – such as recognition, peer review, creating standards for excellence, and funding – and acts as a motivator for botanic garden leadership.

Excellence in Biodiversity and Conservation 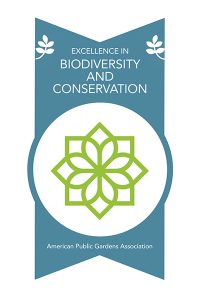 The American Public Gardens Association recognized the North Carolina Botanical Garden for Excellence in Biodiversity and Conservation. The concept of the conservation garden was developed at the Garden in the early 1990s to represent the many conservation-related activities at the heart of the Garden’s mission and programs. This includes propagating native plants to ensure that populations are not damaged by wild collecting, banking seed for reintroduction and protection against extinction, conserving habitats to preserve naturally occurring biological diversity, and creating gardens that display and demonstrate native biodiversity and sustainable gardening practices. 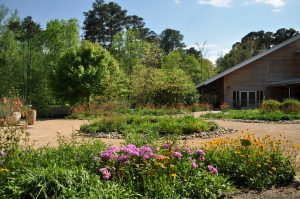 We are deeply honored to be the the first-ever recipient of The American Horticultural Society’s new Garden Stewardship Award, which recognizes a public garden that embraces and exemplifies sustainable horticultural practices in design, maintenance, and/or programs.

Our horticulture staff incorporate a conservation ethic into every aspect of their work, from plant selection and landscape design to water use, integrated pest management, renewable energy, and recycled and reused materials.

Learn more about our programs and the Garden Stewardship Award

The history of the North Carolina Botanical Garden and the botanical legacy of the University of North Carolina at Chapel Hill are intertwined and inseparable.

In 1903, William Chambers Coker, the University’s first professor of botany, began planting a teaching collection of trees and shrubs on the central campus. This collection was to become Coker Arboretum. Starting in the late 1920s, Coker and his student Henry Roland Totten, proposed a more complete botanical garden south of the main campus. Although some plantings were made by the 1940s, it was in 1952 that the Trustees dedicated 70 forested acres for botanical garden development. To this tract were added 103 acres of dramatic creek gorge and rhododendron bluffs, donated by William Lanier Hunt, a horticulturist and former student of Coker and Totten.

The Garden’s formative period coincided with a surge of interest in plants and conservation fueled by Earth Day celebrations and the environmental movement. The Garden’s early era was characterized by limited resources and unlimited idealism and energy. During the 1970s and 1980s, students, volunteers, and a growing staff under the leadership of Superintendent Ken Moore constructed “habitat gardens”- displays representing the major plant communities of the state. The Garden’s administrative, research, and public education space, the Totten Center, was opened in 1976.

The 1960s also saw the initiation of field research on a contiguous 367-acre tract of old farmland and native woodlands dedicated by the UNC Trustees in 1984 as the Mason Farm Biological Reserve. Today, the Reserve provides research facilities for diverse projects in disciplines such as ecology, bird behavior, population biology, genetics, and developmental biology.

Encouraged by the North Carolina Wild Flower Preservation Society whose members had helped found the Garden, Superintendent Moore promoted “Conservation Through Propagation” as an alternative to the unethical collection of native plants from their natural habitats. He recruited a growing corps of volunteers who provided valuable assistance to staff in welcoming visitors, leading tours, conducting “plant rescues,” propagating plants, and constructing the Mercer Reeves Hubbard Herb Garden.

In partnership with the North Carolina Botanical Garden Foundation, the Garden became a steward of natural areas near Chapel Hill and elsewhere in the state. As the Garden matured and added staff with other areas of expertise, the Garden developed programs and collections of national significance, such as the Southeastern Carnivorous Plant Collection. In 1984, the North Carolina Botanical Garden became one of the founding members of the Center for Plant Conservation, a network of gardens and arboreta responsible for the collection of propagules, research, and protection of our nation’s rarest plants.

Dr. Bell retired as director in 1986 and was succeeded by Peter White. Dr. White led a review of the 1984 “Long Range Plan,” resulting in the “Report on Mission, Goals, and Objectives” (1988). Next came the completion of a new Master Plan by Jones & Jones (approved by the University Trustees in 1990). In 1997, the North Carolina Legislature granted funds for design of the Herbarium and Botanical Library building, one of two new facilities described in the Master Plan. In 2000, with support from a $2.7 million bequest, the staff launched the design of the Master Plan’s Visitor Education Center by Frank Harmon Architects. Completed in 2009, this building is a LEED Platinum-rated building. Dr. White retired from the Garden in December 2014. Dr. Damon Waitt became the director in April 2015.

In the years since its founding, the Garden has acquired responsibility for four other major units:

The lands of the Garden have grown to over 1,100 acres, including a number of nature preserves and conservation easements held by the North Carolina Botanical Garden Foundation.

Today the North Carolina Botanical Garden is nationally known for its conservation programs, educational collections, and diverse programs including native plant studies, botanical illustration, and horticultural therapy. Since the early 1990s, and building on themes that go back to the Garden’s founding, the staff has crafted a unique and new theme for botanical gardens: The Conservation Garden.

Need to know more? Read The North Carolina Botanical Garden at 50 by following the link below.

The North Carolina Botanical Garden
at 50

To the visionaries who came before us, the pragmatists who carried the vision forward, and the allies yet to come; and to past, present, and future seekers who find inspiration, encouragement, and solace at the North Carolina Botanical Garden.

One would be hard pressed to walk into any botanical garden in the world and come across a compendium of historical information as complete as this one. Even more amazing, this compilation of the Garden’s 50-year history was authored by volunteers! Calling themselves the Greenbriers, this dedicated group of 12, under the able leadership of Joanne Lott, has spent countless hours researching, fact checking, and writing the definitive guide to the first 50 years of the North Carolina Botanical Garden.
Explore Our History 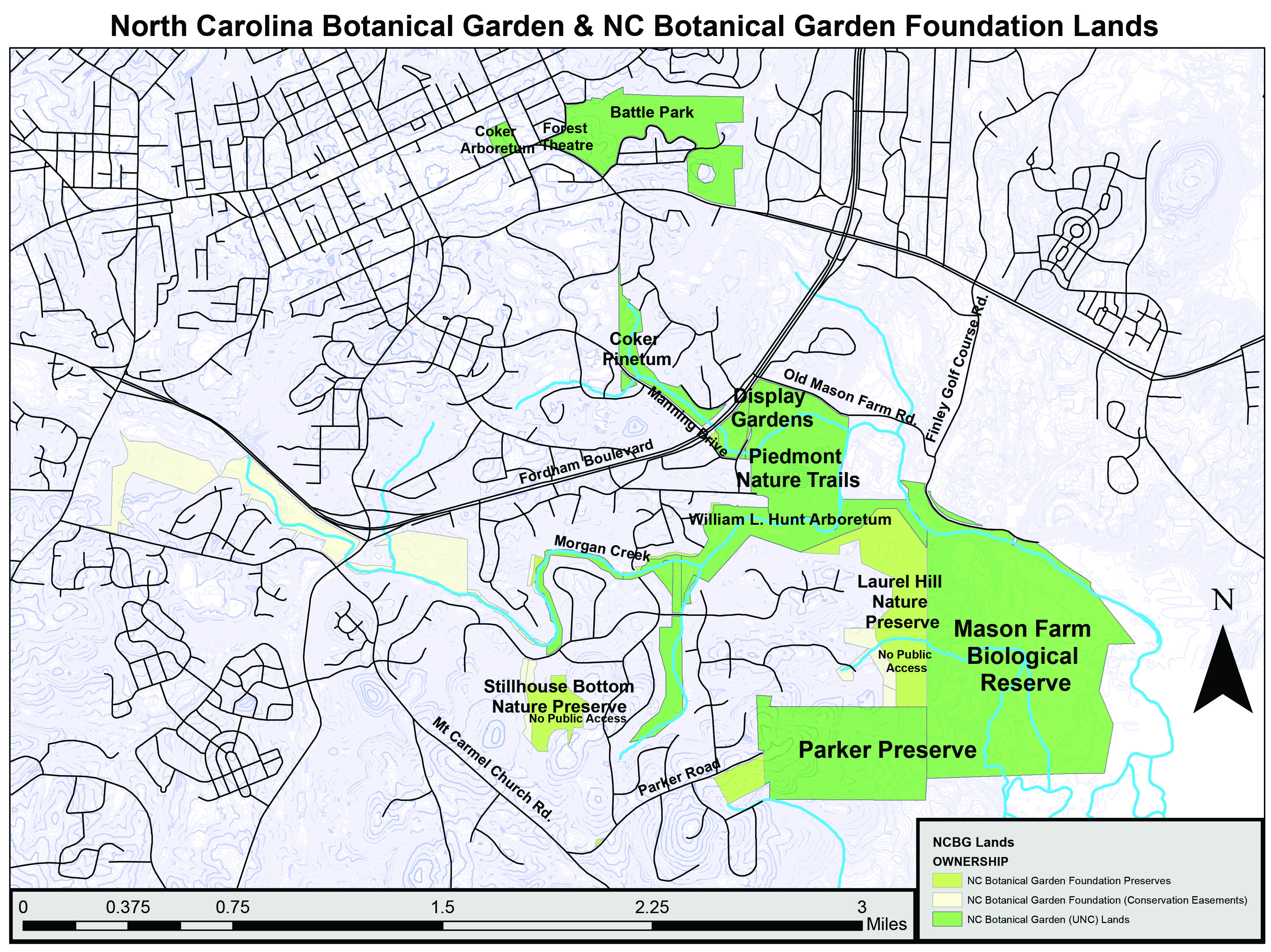 Click here to download a map of lands managed by the North Carolina Botanical Garden located near the Display Gardens.