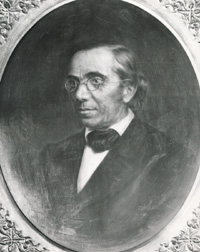 The following is from the Jean and Alexander Heard Library, Vanderbilt University, in Nashville, Tennessee:

Augustin Gattinger was born February 3, 1825 in Munich, Germany and died July 18, 1903 in Nashville, Tennessee.  He was a botanist and medical doctor who, in 1901, published the first extensive catalog of the botany of his adopted state entitled Flora of Tennessee and Philosophy of Botany.  This book remains his greatest contribution to the study of botany in the South.

He arrived in the United States in 1849 after being dismissed from the University of Munich for participation in dissident student groupos and the celebration of George Washington’s birthday.  After spending some 15 years practicing medicine in Chattanooga and East Tennessee, his pro-Union sympathies forced him to flee to Nashville in 1864.  He served as an assistant surgeon in the United States Army and was subsequently appointed State Librarian from 1864-1869.

During his years in East and Middle Tennessee, Dr. Gattinger pursued the study of botany, using the travelling he did as a country doctor as an opportunity to amass an extensive collection of plant specimens.  He began corresponding with prominent botanists from all over the country and was able to meet many of them when they convened a meeting of the Association for the Advancement of Science in Nashville in 1877.  At this gathering he was encouraged to compile his extensive knowledge of the then unexplored botany of Tennessee into a catalog.  This small volume, The Flora of Tennessee, with Special Reference to the Flora of Nashville, was self-published in 1887 and paved the way for Dr. Gattinger’s subsequent work, Medicinal plants of Tennessee, which was published in 1894 under the auspices of the State of Tennessee Department of Agriculture.  Flora of Tennessee and Philosophy of Botany, his major work, was published in 1901.  In 1890 he donated his extensive herbarium to the University of Tennessee [Knoxville] where it remained until the building housing it burned to the ground in 1934 and all specimens were lost. (1)

In 2003 the state of Tennessee protected Gattinger’s Cedar Glade and Barrens, a 57-acre natural area in Wilson and Rutherford Counties.  According to the Tennessee Department of Environment & Conservation, the preserve “supports one of the largest and best-known populations of the federally endangered Tennessee purple coneflower (Echinacea tennesseensis).  This pristine glade and barrens complex also supports other state rare species that include cleft phlox (Phlox bifida ssp. stellaria), evolvulus (Evolvulus pilosus), and Gattinger’s lobelia (Lobelia appendiculata var. gattingeri).  Gattinger described many cedar glades and barrens in the lat 1800’s that are presently protected as state natural areas.  He was also the first to describe Tennessee coneflower and provided location information for its occurrence.” (2)

The following is an excerpt from the PREFACE of:  Gattinger, Augustin (1901) The flora of Tennessee and a philosophy of botany, respectfully dedicated to the citizens of Tennessee.  Gospel Advocate Publishing Company:  Nashville, TN.

[*Regretably, in 1934 Morrill Hall which housed the University of Tennessee Herbarium burned to the ground and all 50,000 specimens – including Gattinger’s – were destroyed.]