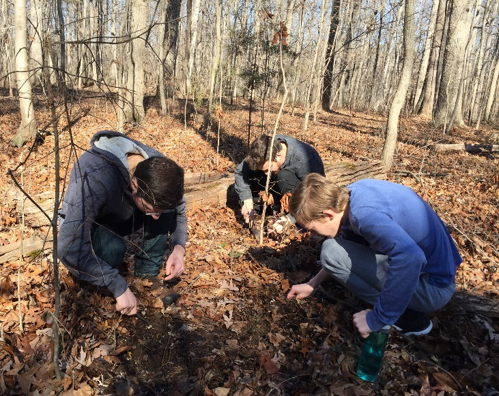 On January 26, 2020, a team of four fearless fungal Herbarium volunteers went to Battle Park to collect more of the fascinating truffle parasite Tolypocladium as part of our on-going effort to inventory the fungi on Garden lands. Little did we know that in addition to our original quarry we would make a significant discovery.

Led by Ezra’s great sense of location, we found the exact spot in Battle Park where we had found the mycoparasite Tolypocladium two weeks prior. Sure enough, Tolypocladium was still there with its host, the deer truffle Elaphomyces. Most remarkably, we found a second truffle fungus in the same spot: Genea hispidula. We found this tiny, pea-size truffle nestled between the leaf litter and the mineral soil. While Genea hispidula’s overall appearance is rather drab, its microscopic ascospores are a sight to behold! (See photos below). This fungus has no common name, but as its scientific name refers to its hairy or bristly covering, we are calling it the Hairy Minitruffle.

The edibility of Hairy Minitruffle is unknown, but it is really just too tiny to be of culinary interest. Deer Truffles (Elaphomyces) are not poisonous, but are generally considered inedible because of their tough texture and/or poor taste, though, as the common name implies, deer do consume them. The truffles which humans eat are in the genus Tuber.

Genea hispidula, Hairy Minitruffle, is known from European and North American hardwood forests so it has a widespread range but is seen rarely. In fact, not only is our collection the first record for North Carolina, but also it is the first collection for the entire southern United States. Previously the fungus was only collected in four states: Maine, Michigan, Minnesota, and New Hampshire. It is always a delight to make a new discovery, but it is particularly satisfying to find it on Botanical Garden land! Our collection of Hairy Minitruffle will join the other 30,000 specimens of fungi from around the globe in the Herbarium in Coker Hall.

The Herbarium was founded in 1908 by Dr. William Chambers Coker, the first chair of the University of North Carolina at Chapel Hill Botany Department. He was an eminent mycologist and his fungal and botanical collections formed the nucleus of the Herbarium. In April, 2021 the North Carolina Botanical Garden will host the Mid-Atlantic States Mycological Conference featuring scientific presentations and posters on Saturday and a foray for morel mushrooms to one of Coker’s favorite mushroom sites on Sunday.

Find out more about the Herbarium >

All photos by Van T. Cotter