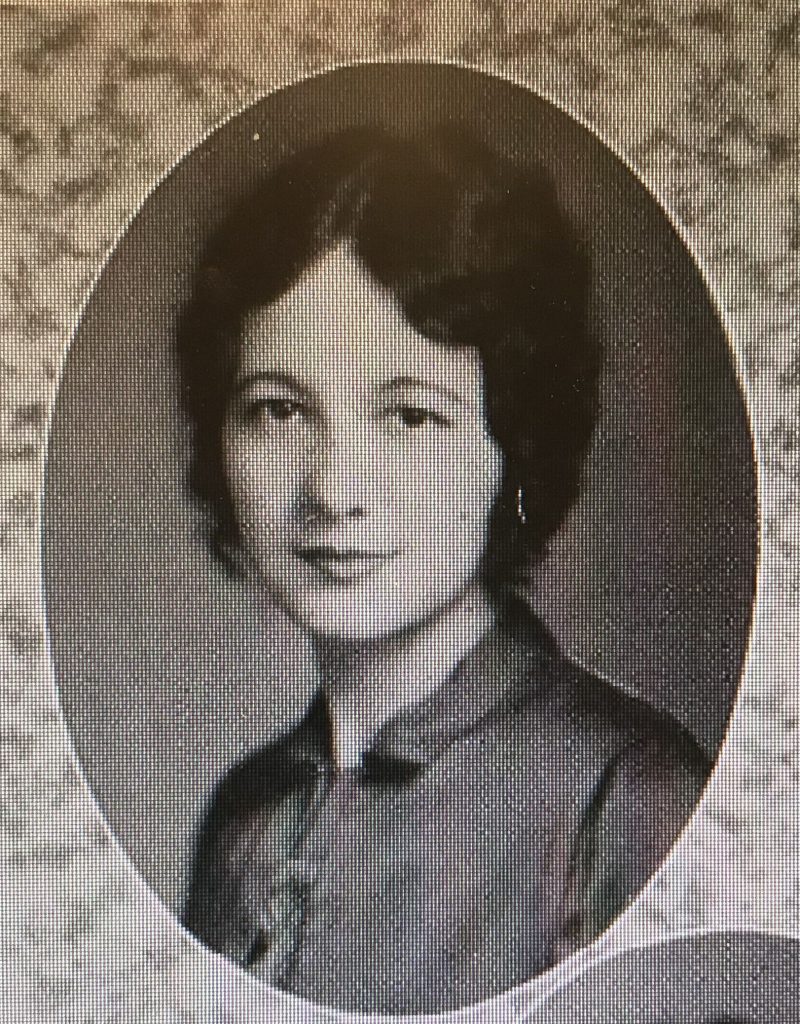 Most specimens are signed either “Gertrude Grimsley” or “Gertrude I. Grimsley”; no specimens collected under her married name have been found.

Gertrude graduated from the North Carolina College for Women in Greensboro, North Carolina in 1929 with an A. B. in Education.  While at NCCW she was a member of the Young Voters Club.

Most of the specimens curated by NCU were collected by Ms. Grimsley while she was at NCCW.  The earliest specimen, Asplenium trichomanes, dated 18 May, 1929, was collected at Piedmont Springs in Stokes County, North Carolina.  The exact location of Piedmont Springs is unclear, though it was likely near Hanging Rock and the Dan River.  This must have been a favorite destination for botany classes from NCCW, as other students also made collections from Piedmont Springs.

“Mineral springs in the area [town of Danbury] attracted health-seekers and wealthy socialites.  Residents of coastal towns sought relief from summer heat and miasma during the colonial period by visiting springs on the edge of the Piedmont.  By the antebellum period, however, trips to resorts in North Carolina and elsewhere became a fashionable symbol of prosperity.  Piedmont Springs, located about two miles north of Danbury, emerged as a resort in the early 1850’s.  Thornton Reddick purchased the property in May 1849, and by August, 1851, he was rapidly improving the property for the “accommodation of the afflicted,” who sought the chalybeate water.  The facilities included eight cabins (then under construction) and a two-story log hotel.  The spring provided income for area residents who worked there or sold produce with which to feed guests.  Subsequent owners dramatically improved Piedmont Springs.  One visitor in 1858 described the changes that occurred: “It seems but yesterday, I used to come to these springs when in their original native simplicity.  The worst kind of ‘old corn Whisky’ was retailed by ‘Flinchem’ in a gourd, from a brown jug with a corn-cob stopper.  Now champagne, etc. is the order of the day… We then scraped away the ‘trash,’ leveled the dirt, and sprinkling down the barn, had the real barn dances of primeval times the music of the banjo.  Now, fair ladies trip the light fantastic in fine saloons, to the music of brass, catgut, or whatever you wish.  Then, a tough sheep, stolen by ‘Dick Chamberlain,’ was a delicacy rare as tough.  Now ‘anything you call for’ is furnished by polite and trained servants.  Then, log cabins, ox wagons, and tents sheltered our beavers from the mountain showers.  Now splendid big buildings, all white and stately, cast their proud shadows across the way.” … The hotel at Piedmont Springs burned in 1880 but a huge facility replaced it in 1889.  The rambling two-story structure, noted for its imposing observation tower over the front entrance, could accommodate 150 guests… Piedmont Springs operated until 1930, when it was destroyed by fire.” 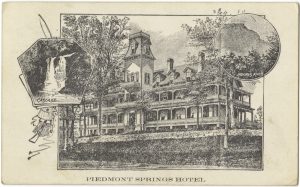 Ms. Grimsley enlisted in the Womens Army Corps on 11 October, 1944, and her enlistment document lists her as a single woman, no dependents, and a teacher.

It is unclear when Ms. Grimsley married, but her death certificate lists her name as “Gertrude Grimsley Scott” and notes that she is “widowed” and her profession as “School Teacher”.  The cause of death is noted as “toxemia breast” which perhaps means breast cancer.  She is buried with many family members in Oakdale Cemetery in Wilmington, North Carolina, and her status as a World War II veteran is noted on the marker.

The University of North Carolina at Chapel Hill Herbarium would welcome more information about the life and career of Gertrude I. Grimsley Scott.