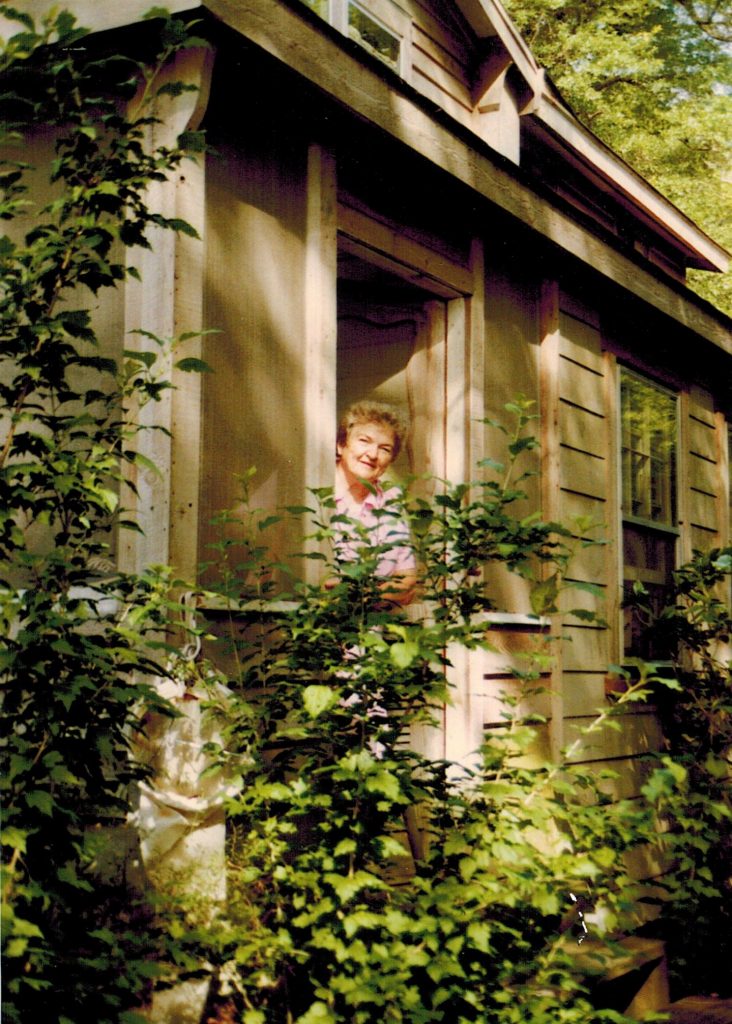 The University of North Carolina at Chapel Hill Herbarium (NCU) has cataloged approximately 120 vascular plant specimens and two bryophyte specimens collected by Anne McCrary.  Most were collected in New Hanover County, North Carolina where she spent most of her life.  Without doubt more will be found as we continue to catalog our collection of plants at sernecportal.org , pteridoportal.org , and bryophyteportal.org

She collected many plants with Harry E. Ahles, co-author of Manual of the Vascular Flora of the Carolinas (1968), and with fellow graduate student at Carolina, George P. Sawyer, Jr.

Dr. Joseph R. Pawlik, Frank Hawkins Kenan Distinguished Professor of Marine Biology at the University of North Carolina at Wilmington Center for Marine Science, remembers Dr. McCrary as “an all-around naturalist.”  He “inherited” her invertebrate collections in 1991 upon her retirement from UNC-W.  He has incorporated them into the teaching collection for Invertebrate Zoology.7

Anne Bowden McCrary, the daughter of James Owen Bowden (1875-1938) and Dovie Ellen Phelps Bowden (1902-1980), was born on 25 October, 1926 in Wilmington, North Carolina.1, 8  The 1930 US Census lists James Bowden’s occupation as “Broker, Shell Fish.”  “It was he who, in role as seafood merchant, took her into the sound and taught her to love that world,” says Anne’s daughter.  “He died when she was eleven, but his impact was lasting.”11  Anne attended North Carolina Women’s College (the forerunner of University of North Carolina at Greensboro), but left after just one year to marry Marcellus Everett McCrary, Jr. (b. 1923), a watchmaker in Wilmington.1,2, 8

After their two children started primary school, Anne returned to school at Wilmington College (a two-year institution and  forerunner of University of North Carolina at Wilmington), and graduated in 1956.1  Marcellus McCrary died of undetermined, natural causes at the age of 35 on 9 September, 1958, leaving Anne a widow with two children, daughter Anne and son M. Everett McCrary III (1949-2016).1, 2  “Anne’s mother, Dovie Ellen Phelps Bowden, was a nurse, and her salary helped make it possible for Anne to go back to school when Anne was widowed,” remembers Anne’s daughter.11  The family moved to Chapel Hill, and Anne entered the University of North Carolina at Chapel Hill.  She earned three degrees from Carolina and was inducted into the Alpha of North Carolina Chapter of Phi Beta Kappa on December 5, 1961.5   For her Masters and Doctoral degrees she studied with Dr. Charles E. Jenner in the Zoology Department at UNC-Chapel Hill.9  The title of her Masters thesis was “The effect of photoperiod, temperature, and food on diapausing and developing larvae of Toxorhynchites rutilus (Coquillett)”* and that of her Doctoral dissertation was “The seasonal distribution of zooplankton in Wrightsville Sound.” (* Toxorhynchites is the largest known species of mosquito.  The adult insect does not consume blood, but instead subsists on plant sap, fruit juices, and nectar.  Toxorhynchites larvae are aquatic and prey on other aquatic animals including the larvae of blood-sucking mosquito species.(10))

Dr. McCrary returned to Wilmington in 1969 to teach in the Biology Department of the newly formed University of North Carolina at Wilmington.  She earned several honors from the University including the Board of Governors Award for Excellence in Teaching (1984) and Alumnus of the Year (1986).  McCrary retired from UNC-Wilmington in 1990.1

On 17 April 1993 the Anne B. McCrary Park was dedicated in her honor.  The ca 25 acre Park is located at 4000 Randall Parkway in Wilmington, North Carolina.  Her daughter, Anne McCrary Sullivan, is an educator and poet who was strongly influenced by her mother’s love of nature and science.6

Anne E. Bowden McCrary died on 7 November 2011 at age 85 and her ashes were scattered in Wrightsville Sound and on the Big Island of Hawaii.  Her monument is on the family plot in Oakdale Cemetery in Wilmington, New Hanover County, North Carolina.8, 11

Notes from a Marine Biologist’s Daughter

My mother loves the salty mud of estuaries,
has no need of charts to know what time
low tide will come.  She lives
by an arithmetic of moon,
calculates emergences of mud,

waits for all that crawls there, lays eggs,
buries itself in the shallow edges
of streamlets and pools.  She digs
for Chaetopterus, yellow and orange
worms that look like lace.

She leads me where Renilla bloom
purple and white colonial lives,
where brittle stars, like moss,
cling to stone.  She knows
where the sea horse wraps its tail
and the unseen lives of plankton.

My mother walks and sinks into an ooze,
centuries of organisms ground
to pasty darkness.  The sun
burns at her shoulders
in its slow passage across the sky.
Light waves like pincers
in her mud-dark hair.