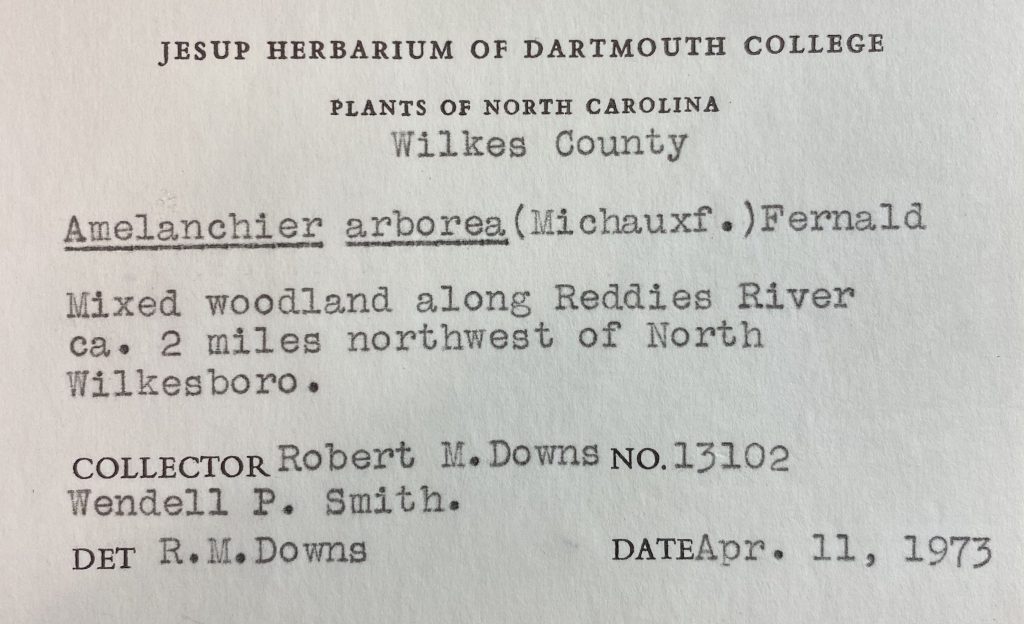 The University of North Carolina at Chapel Hill Herbarium (NCU) has cataloged about 140 vascular plant specimens collected Wendell P. Smith.  All were collected with Robert M. Downs in 1973 throughout Wilkes County and Alexander County, North Carolina.

How Downs and Smith came to be acquainted is unclear.  The specimens collected by Downs & Smith were first deposited in the North Carolina State University (NCSC) herbarium, then given to the Jesup Herbarium of Dartmouth College (HNH) in 1977.  When the Dartmouth Herbarium down-sized in 2002, their holdings from the southeastern United States were given to NCU.

Wendell Phillips Smith was born in Lyndonville, Caledonia County, Vermont on 17 September 1892 to Sheridan Irving Smith (b. 1847) and Clara (Eastman) Smith (b. 1856).  The 1900 US Census lists Sheridan Smith’s profession as “RR [railroad] Machinist” and he, wife Clara and seven year old Wendell living in “Lyndon town”, Caledonia County, Vermont.(3)  A decade later the 1910 US Census lists Clara Eastman Smith and son Wendell living with her extended family in Newbury, Orange County, Vermont and Clara’s profession as “Painting Teacher, Private Classes.”(4)  At age 27, Wendell was still living with his mother and extended family in Newbury; his profession is listed in the 1920 US Census as “Farm laborer, home farm.”(5)  The 1930 and 1940 US Census list Wendell, now ages 37 and 47, respectively, as living with his mother on her brother’s dairy farm in Wells River, Orange County, Vermont.(6, 7)   In 1947, at age 55, he married  36 year old Louise Hix Pearson (1911-2002) in Brookline, Massachusetts.(1, 8) In 1954, Wendell and Louise moved to North Wilkesboro, Wilkes County, North Carolina. (2)  Wendell Phillips Smith died on 11 April 1980 at age 87 and is buried in Moravian Falls Cemetery, Wilkes County, North Carolina. (1)

Every year the CBC [Carolina Bird Club] Christmas Bird Count includes a report from North Wilkesboro with one observer.  This lone observer is Wendell P. Smith, 79, dean of bird watchers and one of the best ornithologists in the Southeast.  Last December Wendell and I drove up the Yadkin River to look for waterfowl wintering on the Kerr Scott Reservoir.  He was making his sixty-eighth Christmas Bird Count.

“You can never tell what will be found around the lake,” Wendell said.  “Once after a storm on the coast, we found two Red Phalaropes and a flock of Golden Plovers that had been driven this far inland by the storm.”

Born at Wells River, Vermont, Wendell was confined to the family farm by a childhood illness.  The self-taught naturalist has never attended school a day in his life.  He was taught in the home by his mother and at an early age began the lifetime study of the natural history of the family farm.  On his daily walks around the farm, young Wendell began keeping records of nesting birds and of the arrival and departure dates of migratory birds moving through the Connecticut River valley.

Although most of his life was devoted to the study of a 100-acre hill-country farm, he became well known in scientific circles for his discoveries.  He has been elected to learned societies, contributed to leading scientific journals, and for 25 years he served as the State Ornithologist of Vermont.  In 1954 he retired from this position and moved to North Wilkesboro [Wilkes County, North Carolina] near the home of his wife, the former Louise Pearson of Moravian Falls.

Once settled in North Carolina, Wendell immediately began studying the natural history of Wilkes County and the northwestern piedmont.  Every year he searches the surrounding countryside for nesting birds and records the passage of migratory species.  A few years ago he was invited to Washington, D. C., to be honored by the U. S. Bureau of Sports Fisheries and Wildlife for his volunteer contributions to its Migratory Bird Study.  At that time he had reported migration data to the bureau for 57 years.  When the study was complete in 1969, Wendell’s records covered 65 continuous years.

Wendell is very active in the affairs of the Carolina Bird Club, and has served as treasurer of the club.  His amazing ability to identify a bird with a quick glance or a few notes of its song has made him a popular figure on the club’s field trips.  His presence on a trip always attracts a large group of birders.  A field trip with him is a quick course in bird identification because Wendell is happy to share his lifetime accumulation of nature lore.  “You don’t need a guide book with Mr. Smith,” a young birder once commented.  “He knows all of the birds.”

We asked how he had adjusted to the Yadkin River Valley after a lifetime in the Connecticut River Valley in Vermont.  “There isn’t a lot of difference,” Wendell replied.  “Nature is much the same everywhere.  We have many of the same birds passing at migration, but I do miss the Snow Buntings in winter.”

A lifetime of patient observation has taught Wendell Smith the continuity of nature’s show.  Forever old, and yet forever new; he knows there is always something new and exciting waiting to be discovered. (2)

Special thanks to Will Cook of Durham, North Carolina for research assistance.