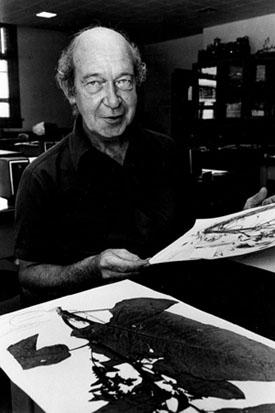 Harry Ahles was among the last botanists to gain his position through pure knowledge of plants rather than through the usual system of academic advancement.  He gained his first professional position as herbarium curator at the University of Illinois (ILL), with only a high school diploma (and a recently acquired one at that).

While the University of North Carolina at Chapel Hill Herbarium (NCU) and the University of Massachussetts at Amherst (MASS) curate tens of thousands of specimens collected by Ahles, it is difficult to find an herbarium in North America which does not have at least a few of his specimens.

Oswald Tippo, in his obituary of Ahles (Bull. Torrey Bot. Club 109 (1): 84-86), tells a story of how Ahles was confronted by the police while collecting weeds in New York City (he was serving as a gardener at the New York Botanical Garden).  When the officers realized that he was a botanist, they took him to a plot of alleged “tomatoes” which Harry determined to be marijuana.  His unusual “field work” in the city resulted in a publication:  “Interesting Weeds of New York City” (Bull. Torrey Bot. Club 78: 266-274.)

During his years at UNC-Chapel Hill, Ahles added over 200,000 plant specimens to the herbarium.  Similar vast gains in the collection were made while he occupied his later position at University of Massachusetts at Amherst.  Ahles’ departure from Carolina was unusual, to say the least.  According to Tippo, whom he contacted about the possibility of a job at Amherst, Ahles left Chapel Hill because the Herbarium had moved into the new botany building, Coker Hall, which had air-conditioning, and “I will not work in an air-conditioned laboratory.”

His love of nature and his dislike of modern “conveniences” were also evident in his choice of residence.  While at Amherst, he lived in a log cabin which he built on top of Horse Mountain (42.4000881 latitude, -72.6773128 longitude) in Hampshire County, Massachusetts.  His only companion was his dog, Montana.

“Harry Ahles Remembrances 1924-1981, Department of Botany, University of Massachusetts at Amherst” is composed of Oswald Tippo’s article which appeared in the Bulletin of the Torrey Botanical Club, as well as remembrances by Joe Pratt (a student o Ahles) and a collection of quotes, compiled by Susanna Von Oettingen, from students at Amherst and colleagues around America.

“He had the keenest eye of any individual, professional botanist or otherwise, than I’ve ever met.”  — Albert Radford

“He shared his knowledge of plant material in a selfless and inspiring way; in brief, he was a great teacher and a great man.”  — Joe Pratt

“I have never known a more intelligent and enthusiastic naturalist than Harry.  He had a special way of expressing his vast knowledge; a shy modest manner.”  — Sharyn Goldstein

“To us, he was a teacher not only of plants, but of life.  He captivated us so, and we wanted to ‘grow up to be just like Harry'”.  — Tom Rawinski

Original document by Ron Gilmour, William Burk, Mary Felton, Jimmy Massey and Jim Murphy.  Edited and updated by Carol Ann McCormick.  Thanks to Anne McCrary Sullivan for the photos of Ahles ca. 1950, which she found in the papers of her mother, Dr. Anne E. Bowden McCrary (1926-2011), a good friend of Ahles.