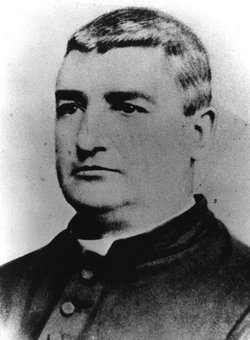 The Langlois Herbarium (LCU) at the Catholic University of America in Washington, D.C. was named in honor of  l’Abbe August Barthelemy Langlois.  “His herbarium, which was received at the Catholic University of America in 1896, numbered approximately 20,000 specimens, but his duplicates were widely distributed to several herbaria.” (2)  LCU was dispersed by sale in 1985-1986; institutions that received portions of LCU included Canadian Museum of Nature (CAN), Carnegie Museum of Natural History (CM), Delaware State University (DOV), Field Musuem (F), United States National Arboretum (NA), University of Texas (TEX), United States National Herbarium (US), University of Wisconsin, Madison (WIS), and Howard University (HUDC).

Louisiana is at this time the fortunate possessor of a most industrious and acute botanist in the person of Rev. A. B. Langlois, of St. Martinville.  Mr. Langlois was born in France in 1832, and he began his botanical studies in that country, for before coming to America in 1855, he had made an herbarium of some 1200 species.  He spent nearly two years in Cincinnati completing this ecclesiastical education, and then located at Pointe-a-la-Hache, La., where he remained for 30 years.  The locality being near the delta of the Mississippi was one of peculiar botanical interest, and Mr. Langlois succeeded in discovering many rare and some new species of plants.  Langlois has carried on his botanical studies under circumstances which would have deterred many from undertaking them.  He has been entirely cut off from botanical associates, and the climate of his region is so moist as to render the drying of specimens most difficult.  Upon going to Point-a-la-Hache, he at once renewed his botanical work, but being entirely without books and wholly unacquainted with any American botanist he sent his first collections numbering some 300 species, to France to be named, but he never heard from them or received one word of encouragement.  Evidently disheartened he dropped the study of plants for 20 years, a period which he now looks upon with deep regret.  In 1878 he began again the study, first with only Wood’s “Manual,” and then with Chapman’s “Southern Flora.”  Langlois thus relates his progress from this time, “By accident I learned that there was a botanist, Dr. Puissant, at the Ecclesiastical Seminary of Troy, N.Y., and I immediately wrote to him offering Southern plants for Northern ones, and I received from the doctor about 500 species.  Soon after I found out there was published here a “Botanical Gazette,” for which I immediately subscribed.  From this journal I learned many things unknown to me before; through its advertisements I got plants from Eggert, of Missouri, Pringle, of Vermont, and a check-list from Patterson, of Illinois.  Then I began to know and appreciate the advantages of having correspondents.  The ones who have been of greatest service to me in Phanerogams are Morong, of Massachusetts, Wibbe, of New York, and later, J. Donnell Smith, of Baltimore.  In grasses I have been assisted by Dr. Vasey, of Washington, and in Cyperaceae by Connant.  In 1884, through the kindness of Mr. Lehnert, of Washington, I began the study of mosses, liverworts and lichens, and in the latter part of 1885, at the suggestion of Mr. Scribner, I began the study of fungi.  I soon acquired a deep interest in these plants, and have been greatly aided in their study by Prof. Ellis, of New Jersey.  The mycological flora of Louisiana being so rich and at the same time so poorly known, I have for the past three years given almost my entire attention to it.  Every day I make new discoveries, and I am yet far from having exhausted this intensely interesting part of the Louisiana flora.”  Mr. Langlois has now an herbarium containing some 5000 species of North American plants, including 1214 species of Phanerogams and vascular cryptogams of his State.  So far as his State is concerned, this work has been done single-handed.  About a year ago, Langlois published a catalogue of Louisiana plants which embraced the fungi he had found, now numbering 1200 species.  Langlois‘ collections are widely distributed in the herbaria of this country and in France, and his specimens are highly valued by all who possess them.

I have been thus particular in speaking of Mr. Langlois, not only to show the interest that may be acquired in the study of botany, but also to show what may be accomplished under conditions most adverse.  Mr. Langlois is now rector of St. Martins’ church, St. Martinville, La.