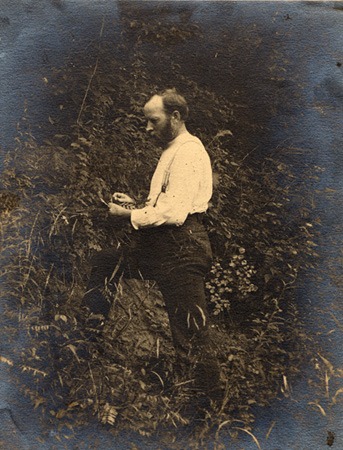 In February 1889, Pammel came to Iowa State College (University) as Professor of Botany (1889-1929) a position made vacant by the resignation of Dr. Byron Halsted (1884-1888). In addition to teaching botany, he taught courses in Landscape Architecture (1889-1890).  Pammel was also the Iowa State College Experiment Station Botanist (1889-1922).  During Pammel’s tenure, Iowa State became the first school in the United States to offer bacteriology courses to general students.

Pammel was also a well liked [sic] and respected by his students, many of which considered him a great influence in their lives. Among these students was George Washington Carver. In 1891, Carver became the first African-American to enroll at Iowa State College of Agriculture and Mechanic Arts (Iowa State University).  Pammel encouraged him to stay at Iowa State as a graduate student after he completed his bachelor’s degree (1894). Over the next two years, as assistant botanist for the College Experiment Station, Carver quickly developed scientific skills and plant pathology and mycology, the branch of botany that deals with fungi. He published several articles on his work and gained national respect. Carver completed his master’s degree (1896) and was invited by Booker T. Washington to join the faculty of Alabama’s Tuskegee Institute.  Pammel and Carver remain in close contact after Carver moved to Alabama.

Pammel conducted research in plant pathology and in weeds, which resulted in numerous publications, including A Manual of Poisonous Plants (1910), Weeds of the Farm and Garden (1911), and The Weed Flora of Iowa (1913, 1926).  Other research activities included the anatomy of seeds and plants of the legume family. In systematic botany, he was interested in the trees and other floor of the country, and he made extensive collections of plants, which he gave to the college. For the United States Forest Service, he made a study of grazing conditions in the Uintah Mountains, and did work on grasses of the Plains region for the U.S. Department Of Agriculture.  Many honors were conferred upon Dr. Pammel…

Pammel married Augusta Emmel of Chicago, Illinois in 1887 and they had six children, five daughters and one son. He died in 1931 on a transcontinental train traveling through Nevada.

Dr. Pammel was the Curator of the Herbarium at Iowa State College (ISC) from 1889 to 1931, and added ca. 50,000 plants to the collection.  Pammel also arranged the herbarium’s purchase for $5,000 of the C. C. Parry Collection which contained many type specimens of plants of Iowa, the American West, and Mexico.5

“Dr. Pammel’s last major activity, and the one by which he was best known to the public, was in the field of conservation. He wrote the Iowa conservation bill and served as the first chairman of the Iowa Conservation Board. During his regime 36 state parks were required, and the lakes of the state were placed under the control of the Conservation Board, making a total area of 10,000 acres dedicated to state park purposes.”3  Pammel State Park in Madison County, Iowa, dedicated in 1928, was one of Iowa’s first state parks.  It features a limestone ridge known as the “Backbone” which is home to some of the oldest oak trees in the State.4