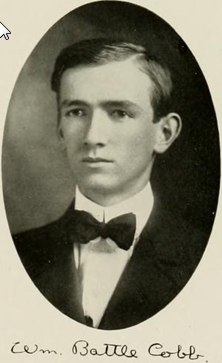 Mary Lindsey Battle, William Battle Cobb’s mother, was born in Lilesville, Anson County, North Carolina on 25 December 1864.  She was the sister of Kemp Plummer Battle (1831-1919), who served as the President of the University of North Carolina at Chapel Hill from 1876 to 1891.  Battle Park, named for Kemp Plummer Battle, was a favorite collecting location for his nephew, William Battle Cobb. Mary Battle Cobb died in 1900.1,2,5    “Following three years of bachelorhood, an ardent [Collier] Cobb passionately courted Mary’s cousin, 40-year old Lucy Plummer Battle.  They were married in April 1904, and a year later Lucy and her infant son Richard died.  [Collier] Cobb then married Mary Know Gatlin, a native of Arkansas… By 1915 [Collier] Cobb had used a portion of Mary Know Gatlin Cobb’s dowry to purchase land and build houses on Cobb Terrace [35.917169 latitude,  -79.054471 longitude in downtown Chapel Hill]…”5

William Battle Cobb attended the University of North Carolina at Chapel Hill starting in 1908, earned an A. B. in 1912, and an A. M. in 1913.  While at UNC-CH, Cobb was a member of the track team (1910-1911) and served as an Assistant in Botany (1911-1913).  Cobb enlisted in the A.S. Signal Corps on January 16, 1918 and graduated from the U.S.A. School of Military Aeronautics on August 17, 1918.  He attended a war course for aerial observers, then School of Fire for Field Artillery at Fort Sill, Oklahoma in 1918.  He spent 1919 at the Air Service Flying School at Post Field, Oklahoma, and was commissioned as a 2nd Lieutenant in the Air Service, Officers Reserve Corps. In 1922 he attended Reserve Officers Training Camp at Taylor Field, Montgomery, Alabama.  In 1923 he was promoted to 1st Lieutenant, Aerial Observers Rating.

W. B. Cobb served as a scientist for the U.S. Soil Survey from 1913 to 1920, and as a geologist & soil expert for the American Rural Planning Association in Madison, Wisconsin in 1920.

W. B. Cobb was known as an innovator in the field of soil science.  “The greatest time-saver in soil survey field work was introduced in North Carolina in 1920.  W. B. Cobb and W. A. Davis, in Tyrrell County, used a Model T Ford as the mode of transportation.  Road measurements were by means of a special speedometer-odometer attached to the right side of the dash of the auto and connected by a flexible cable to a small gear box clamped to the right frame of the forward axle.  A fiber sprocket on the gear box was turned by a notched metal ring attached to the wheel.  A standard speedometer was used at first.  A carefully calibrated and numbered scale to show 50 lines to the inch was pasted over the tenths dial of the odometer.   Thus, the same scale was used as on the [horse] buggy odometer. .. The first use of an airplane as an aid in soil survey mapping in the State [of North Carolina] was in Tyrrell County, 1920, by W. B. Cobb who had some experience in World War I as a pilot and an observer.  Since about 60% of Tyrrell County was covered by almost impenetrable wet woodlands, Cobb, assisted by W. A. Davis, used air observation to indicate points where he might enter such areas on foot and carry out reasonably definite traverse lines.  He was also enabled to outline changes in forest and other vegetation to help correlate major soil boundaries and indicate drainage changes.”6

In 1923 Cobb presented his ideas on the use of airplanes in soil survey work to fellow soil scientists:

There are two ways in which an airplane may be used to advantage in soil survey work.  One of these is by enabling the surveyor to make direct observations from the air and the other is in the making of aerial photographic maps which may be used in the preparation of base maps and for reference during the survey and the final drafting of the soil map…

… in an area containing considerable timber, swamp land, inaccessible streams, roads which do not run on section lines, shore lines, lakes, &c., an airplane will greatly facilitate the work and materially increase its accuracy.

… The photographs are taken so as to overlap one third each way and are matched and mounted.  The large map, or mosaic as it is called, may be photographed down to the desired scale.  A base map may be drawn from the photographic map which will save the time required to map towns, traverse roads, &c.

… Now that I have attempted to show that better soil maps can be made with the help of an airplane the question naturally arises:  Can this work be done economically?  I believe that it can.  Considerable time can be saved and considerable accuracy can be added to the work.  After having flown over Dare County, North Carolina in a seaplane I am convinced that I could map the county in a month by using a seaplane two or three days and a motor boat the rest of the time.  Without the aid of a seaplane three or four months would probably be necessary.  This is an extreme case, but the proper use of an airplane would save considerable time.

… The element of danger in aerial observation is slight.  I am unable to recall an instance of an aviator getting killed while making maps except under war conditions.  The fatal accidents come from exhibition flying and the like.

If any man engaged in soil survey work wishes to have a most interesting and instructive experience let him take his field maps into the air and compare them with what he sees on the ground below.

From 1920-1924 he served as an Associate Professor of Agronomy at the Louisiana State University in Baton Rouge, Louisiana, then returned to his home state to become an Associate Professor of Soils at North Carolina State College in Raleigh.  In 1927 Cobb received his Ph.D. in Geology from the University at North Carolina at Chapel Hill, and was promoted to full professorship at NC State that same year.3

W. B. Cobb contracted pneumonia shortly after arriving in Chicago on November 12, 1933 for the meeting of the American Soil Survey Association, of which he was the President.  “Attending physicians resorted to oxygenations in a desperate effort to save Dr. Cobb’s life.  He died [on November 22, 1933] in the Illinois Memorial Hospital.”8  Classes at North Carolina State College were cancelled on November 25, 1933, out of respect for the memory of Dr. W. B. Cobb. 7  He is buried in the Old Chapel Hill Cemetery. 4

In July 2020, Mr. Doug Taylor of Pittsburgh, Pennsylvania donated to the University of North Carolina at Chapel Hill Herbarium a book owned by W. B. Cobb.  Mr. Taylor writes, “I lived in the Triangle area from 1970 until 1975.  I enjoyed going to garage sales and frequently picked up older books that touched me in a particular way.  Sometimes old and cheap was enough but I am sure that I picked up this book because of my own education and interest in natural history. As my wife and I consider downsizing over the next several years, I went through my shelves of older books with an eye toward finding new homes for many of them.  While considering the future of this book, I found the name and date on the title page of “Wm. Battle Cobb.  Nov. 23, 1897.”  I imagined that with a name like that, I might be able to find a reference to the former owner.  My search revealed that the date was his sixth birthday and that the book originated in his father’s library based on the late inside the front cover.  I came to you because of the history you wrote about about Cobb’s contributions to the Herbarium.  I imagine that Collier Cobb saw that his son had a passion for natural history and chose this book as a special birthday present.  Though the book probably has little monetary value, I hope that it adds some color to this history of the Herbarium.” 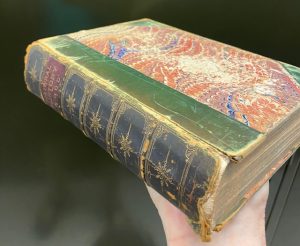 Cobb, W. B. (1912)  Some experiments in plant nutrition.  Thesis, University of North Carolina at Chapel Hill.

Cobb, W. B. (1927)  A comparison of the development of soils from the acid and basic crystalline rocks of Piedmont North Carolina.  Ph.D. Thesis, University of North Carolina at Chapel Hill, Geology Department.

1.  General Alumni Association of the University of North Carolina.  Profile submitted by W. B. Cobb, May 19, 1923.

Special thanks to Meredith Tozzer of the University of North Carolina at Chapel Hill Alumni Records for supplying much of the information in this piece.