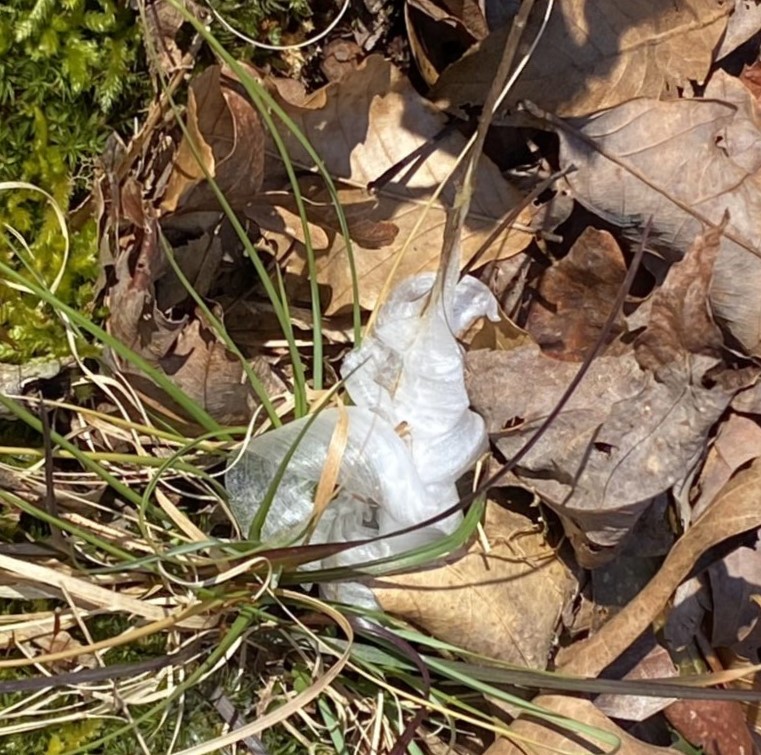 The University of North Carolina at Chapel Hill Herbarium (NCU) is a research collection of fossils, fungi, lichens, algae, mosses, and vascular plants.  There are some plants that are collected infrequently. A plant may be rare so botanists sparingly collect it. Or it may live in an inaccessible place — in the spray zone of a waterfall or as an epiphyte in the treetops — so botanists have difficulties obtaining it. Opuntia mesacantha, Eastern Prickly-pear cactus, is downright painful to collect, so a botanist might just pass it by unless she has gloves to wear and a sturdy box on hand. Poison Ivy, Toxicodendron, is common outside but less so in herbarium cases. The oil that makes this plant toxic persists for years and one can get poison ivy rash from an herbarium specimen!

There is one flower that will never be found in herbarium, but not because of its rarity, habitat or toxicity. I first encountered frost flowers a decade ago along my driveway in southeastern Alamance County. On a cold December morning, I was peeved to see Styrofoam packing peanuts scattered along a rocky east-facing bank uphill from Big Branch Creek. I assumed my neighbors had been hauling trash and had neglected to see that a bag had burst. When I returned home later that day I was relieved to see the litter had been cleaned up.  However, when I drove out the next icy morning, the white curls had returned! This time, I got out of the car, and discovered that these were not Styrofoam but delicate whorls of ice. Even more amazing, each whorl of ice was around the base of only one kind of plant: wild oregano (Cunila origanoides). There were plenty of other plants of the rocky bank — Christmas fern (Polystichum acrostichoides), goldenrod (Solidago sp.), and melic grass (Melica mutica) — but I saw ice whorls only at the base of the wild oregano plants.

A little research revealed that I am by no means the first to observe frost flowers, delicate ribbons of ice that encircle the stems of certain plants when the temperature falls below freezing.1,2,3  According to Forrest Mims, the flowers “are formed when liquid water inside [the plant] stem freezes and splits the stem open. Water and water vapor inside the stem is then emitted directly into the air, where it is transformed into a delicate ribbon of ice.”3

As I had observed, frost flowers do not form on just any plant, but my in my brief research, I found no explanation to why the ice forms on some plants and not on others.  The association is not based on plant family. The plant best-known for forming frost flowers is frostweed (Crocanthemum canadense) in the Rockrose family.  White crowbeard (Verbesina virginica) and wingstem (Verbesina alternifolia) in the Aster family form frost flowers.1,2  “My” frost flower plant, wild oregano, is a native sub-shrub in the Mint family.

How big are frost flowers? I mistook the smallest ones for packing peanuts, but the largest were fist-sized. When do frost flowers form? I first noted them during a cold spell in mid-December. On a walk at 8:30 p.m., I shone a flashlight beam on the rocky bank, and tiny whorls of ice were beginning to form. How long do frost flowers persist? Once the morning sun heats the forest floor (ca. 8:30 a.m. on this particular slope), the delicate whorls melt (or sublimate) away.  Where do frost flowers form? The only place I have seen them in my forest is along 50 meter stretch where wild oregano flourishes. I must point out that I am not typically hiking at 7 a.m. on December-January mornings, so perhaps they “grow” elsewhere!  I suspect early risers — hunters, birders, and farmers — may be far more familiar with frost flowers than stay-in-bed-on-winter-morning-because-the-plants-aren’t-moving botanists!  Over the years I have noted frost flowers in mid- to late-December and early January but not afterward. I hypothesize that as winter progresses, the stems dry out, so less water is available for freezing.

Boxing Day 2020 revealed another winter phenomenon new to me: needle ice. Mark and I decided to walk off some Christmas calories by hiking the Laurel Bluffs Trail in Eno River State Park. We parked at the lot on Pleasant Green Road and walked eastward toward the Eno Quarry. Along a shady portion of the trail, Mark noted interesting ice crystals displacing the soil — our daughter, Lily, had texted us photos of the same phenomenon earlier that day from Carrboro.  The ice was not frost flowers, as the structures were not associated with any plants. “Frost heaves” was my best guess.  A quick look at the Wikipedia entry for “frost heaving” revealed a link to “needle ice” which exactly described and illustrated what Lily, Mark and I had seen. “Needle ice is a needle-shaped column of ice formed by groundwater. Needle ice forms when the temperature of the soil is above 0 degrees C (32 degrees F) and the surface temperature of the air is below 0 degrees C.  Liquid water underground rises to the surface by capillary action, and then freezes and contributes to a growing needle-like ice column… typically a few centimeters long. While growing, they may lift or push away small soil particles.  On sloped surfaces, needle ice may be a factor contributing to soil creep.”4

On future frosty hikes I will be on the lookout for both frost flowers and needle ice, though I may adopt the Swedish name for needle ice,”pipkrake” (from Swedish pipa: tube and krake: weak, fine), just because it is more fun to say.4

Clearly I am not an expert on frost flowers or pipkrake, but it is always fun to find something new on a hike.  Happy Trails and Happy 2021 to all!

*Portions of this column were printed in the November-December 2006 issue of the NCBG Newsletter. Patrick Coin has taken many lovely photographs of frost flowers, and as the electronic version of the newsletter allows for multiple photographs in color and longer text, I have added both.