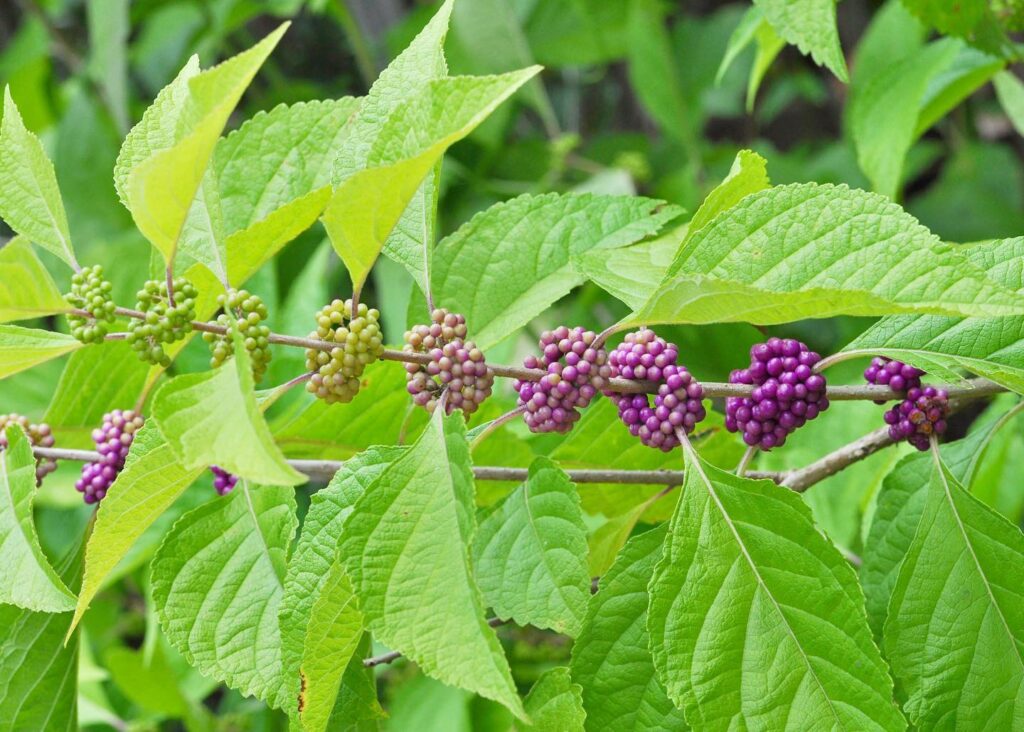 Once again, we are bending the definition of a wildflower to offer American beautyberry (Callicarpa americana) as our 2021 Wildflower of the Year. This deciduous understory shrub is native to woodlands, open forests, and disturbed areas throughout the central and southeastern United States. Beautyberry has pale green leaves along graceful arching stems and forms clusters of dainty pink flowers nestled in the leaf axils in late spring and early summer. However, the real show starts in fall, when the developing berries ripen to such a vibrant shade of magenta that they have been described as “neon violet.” In fact, the genus name Callicarpa comes from the Greek words kalos, meaning beautiful, and karpos, meaning fruit. Even after the leaves have turned yellow and dropped in late fall, the bright berries persist along the stem and feed many species of birds during fall migration. They also provide a striking contrast of vibrant color amongst the warm tones of fall foliage and make beautyberry a real gem in the garden!

The medicinal and ethnobotanical uses of beautyberry are widely documented throughout history. Indigenous tribes in the Southeast cultivated beautyberry, making a tea from the roots to treat a variety of stomach ailments, and using the leaves and roots in sweat lodge ceremonies for the treatment of malaria, rheumatism, and fevers. Another traditional use is to crush and rub the leaves on the skin as a natural mosquito repellant, which has recently been confirmed by scientists at the USDA who isolated a chemical compound from the leaves called callicarpenal that does indeed repel mosquitos and other biting insects. Additionally, the berries are edible, and though somewhat bland and mealy when consumed raw, they can be cooked and prepared into jelly or wine.

Beautyberry is very easy to grow and requires minimal care once established. It prefers sites in full sun to part shade with average to moist, well-drained soils that don’t stay too wet for extended periods. Beautyberry typically grows 4-6 feet tall and wide, but in favorable conditions it can grow up to 9 feet tall. In order to keep a more compact form, it can be pruned back to 6-10 inches tall in March, before the growing season begins. Because of its loose, open form that could be perceived as untidy, beautyberry is best planted in a group to give a fuller appearance, at the back of a shrub border, or in a naturalistic woodland garden where it can stretch out.

Read more about the Wildflower of the Year program