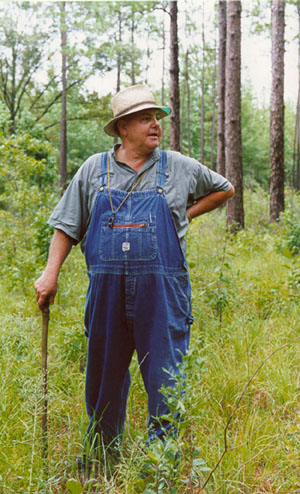 The University of North Carolina at Chapel Hill Herbarium (NCU) curates more than 1,800 vascular plant specimens and about 90 bryophyte specimens collected by Steven Worth Leonard.  As we continue to catalog our collections we will find more specimens collected by him. Most specimens were collected in the United States, particularly in the southeastern states.  In 1970 Leonard and John T. Mickel traveled to Oaxaca, Mexico and collected many pteridophytes.

Leonard’s specimens are distributed widely across herbaria in North America.

He has served as a Biological Consultant, Ocean Data Systems, Inc. (1973-1981), Environmental Specialist for the North Carolina Division of Soil and Water Conservation (1984-1987), an English Instructor, People’s Republic of China (1987-89 and 1992-94), and Botanist for the Mississippi Natural Heritage  Program (1995-1998).  While in Mississippi he completed a biological inventory of Camp Shelby Training Site.

“Big-leaf witch-hazel is a species worthy of note for several reasons,” writes Ken L. Gordon, Botanist, National Forests in Mississippi.  “First, it is a newly described (new to science) woody shrub from the southeastern states where conventional wisdom had decreed there were no new species to be discovered. Second, it is known only from a very small area in the headwaters of one creek in southern Mississippi.*  The new species was first noticed in July 2004 when Steve Leonard was conducting botanical surveys on Camp Shelby training site. Leaves two to three times larger than the common eastern witch-hazel caught Steve’s attention when he first saw these plants. His first impression of the leaves was how much they resembled hazelnut leaves in shape. The lower leaf surfaces were soft, and on new leaves, densely white. Closer examination of the plants revealed the clonal nature of the shrubs where a few plants were 4-8 feet tall but the majority was only 1-2 feet. tall. The short runners are shallowly rooted and easy to pull up. In contrast, the other two USA species are deeply and securely rooted. When he returned in early January to view the

flowers, another surprise awaited. The flowers were of various shades of red! The colonies tend to have one dominant “red” form with a few bushes of variants. The dominant forms may be scarlet, rose-pink, wine-red, or maroon. Usually the colony will have a few shrubs that show some yellow influence where the petals are bicolored. The combination of leaf and flower appearance coupled with the clone-forming habit of the plants did not match any known species of witch-hazel and convinced Steve to embark on a voyage of discovery that led to the final conclusion that big-leaf witch-hazel was indeed a new species!

The known distribution of this species is extraordinarily small, part of one county.* Big-leaf witch-hazel grows in shallow flat-bottomed ravines and on adjacent low slopes. Soil is loamy in texture. The shrub occurs beneath a canopy of pine and mixed deciduous hardwoods. The species apparently tolerates prescribed burning which is typical management in the longleaf pine woods of south Mississippi.

One interesting theory proposed by Steve Leonard was that the new species might represent a rediscovery of the “lost” species Hamamelis macrophylla that was discovered and offered for sale in 1812 by John Lyon, a Scottish nurseryman who worked out of Philadelphia and made commercial collecting trips as far south as Georgia and Florida. The locality from which Lyon collected his plant is very vague. The site could be from a river bank in the western Georgia or the “Katawba (sic) mountains in western North Carolina. Since none of his specimens are known to survive and his description of the locality was brief to the point of confusion, this theory remains an intriguing mystery. Perhaps Lyon’s species still persists, forgotten, in some garden or arboretum?

Since this shrub is only recently discovered, there remains the possibility of new populations being discovered. Steve reports that the shrubs are easiest to spot from a distance in October-November. The distinctive flowers open in late December to early February; hence the best time to look for big-leaf witch-hazel is during “hunting season.””2

In 1968 Steve Leonard deposited in NCU specimens of Trillium cuneatum collected from “Alluvial woods about 0.25 mi S of Old US 64 along Swearing Creek” in Davidson County, North Carolina.  “This Trillium cuneatum collection in 1968,” said Ken Moore, “was one of Steve Leonard’s going out and collecting 125 specimens for [University of North Carolina at Chapel Hill] Herbarium’s distribution to other herbaria. Steven Worth Leonard was the Herbarium Curator from 1968 to 1971. Stevie, as Julie Moore and I called him, suggested that I go along to collect some for the North Carolina Botanical Garden. This was before we became purists about conservation through propagation. This was in spring, very early April, just west of Lexington BBQ along the flood plain bottom of Swearing Creek, a mile or so from where Steve Leonard grew up as a kid. We brought those Trillium back in full flower, each one carefully bundled “Al Radford style” in folds of newspaper secured with rubber bands and watered before carefully placed in the big rubber collecting bags. Next day I planted them at the bottom of the Nature Trail slope where big beech trees were located, along the edge of Meeting of the Waters Creek, almost identical to the habitat situation there at Lexington. Those Trillium never skipped a beat and they proliferated and have spread all over the place as you see them throughout the Garden today. Note does need to be made that those Trillium are not native to the Garden, and of all the plants brought from elsewhere in the state and tried along the nature trail, this is the single species that has survived and thrived.”1

Leonard died at age 79 in Wiggins, Mississippi on 24 June 2022.  He was preceded in death by his parents, Shelley Walter Leonard and Mary Edna Gouger Leonard, by his brother, Rodney Leonard and his sister, Pat Leonard Myers.

*Since Gordon’s article was written, Hamamelis ovalis has been documented from Texas, Alabama, and Georgia.