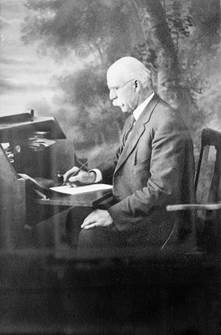 The University of North Carolina at Chapel Hill Herbarium (NCU) has cataloged about 80 fungal specimens collected by Elam Bartholomew.  As we continue to catalog our micro-fungi and other collections it is likely that more specimens collected by Bartholomew will be found.  NCU’s mycological collections are cataloged using funds supplied by the National Science Foundation; a searchable database of those specimens can be found at www.mycoportal.org

NCU also curates fungi collected by Elam Bartholomew’s son, Elbert Thomas Bartholomew (1878-1967), who usually signed his labels “E.T. Bartholomew”.  Elbert Bartholomew was on the briefly on the faculty of the University of Wisconsin, Madison before moving to the University of California, Riverside where he specialized in the study of diseases of citrus.

Elam Bartholomew spent the last years of his life as a curator at the Fort Hays Kansas State College, and the herbarium is named in his honor and continues to curate many of his specimens.  The Elam Bartholomew Herbarium of the Sternberg Museum of Natural History at Fort Hays State University in Hays, Kansas (FHKSC) was founded in 1929 and has vascular plants of the Great Plains, rust fungi, and Tertiary fossil Poaceae.

Elam Bartholomew’s diaries have been digitized by Kansas Memory.

The following information is from the Kansas Historical Society’s webpage devoted to Elam Bartholomew. (1)

“Elam Bartholomew was born June 9, 1852, in Strasburgh, Pennsylvania. In 1854 the family moved to Granville, Ohio, and in 1865 to Farmington, Illinois. Bartholomew was interested in natural sciences and in 1873 began teaching school in a nearby district. In 1874 he moved to Kansas, homesteading on 160 acres in Boy Creek Valley, Rooks County. In Farmington, Illinois, Bartholomew married Rachel Isabel Montgomery, June 14, 1876, returned to the Rooks County homestead where they lived in a sod house. They remained on the homestead until 1929, raising seven children. He was a school and town officer, was an elder in the Presbyterian Church and was a clerk of the district court of the county.

Bartholomew became a well-known horticulturalist and botanist who understood the significance of fungi as the cause of plant diseases. Although Bartholomew had no formal college education, Kansas State University conferred an honorary degree of master of science in 1898, and a doctoral of science degree in 1927. That year he published The Fungus Flora of Kansas, listing 1,829 species in Kansas, only 465 had previously been identified. He published North American Plant Rusts in 1928, considered his most important work, which was republished in 1933. His diary, from 1877 to 1880, reflects his active participation in Republican Party politics, local government, his church, farm organizations, and experimental farming. He served as curator of the mycological museum at Fort Hays Kansas State College.

Bartholomew died November 18, 1934, and is buried in Hays, Kansas. After his death, his original herbarium of about 40,000 specimens was acquired by Harvard University.”

Following Elam Bartholomew’s death in 1934, his son, Elbert Thomas Bartholomew, also a mycologist, wrote a summary of his father’s life and work in Mycologia 27 (2):  91-95, excerpts below:

“When Dr. Bartholomew decided to teach school he found that a general knowledge of botany, which he had never studied, was a prerequisite to the obtaining of a teacher’s certificate in Illinois.  Accordingly, he purchased a copy of Gray’s Lessons in Botany and had soon passed the examinations in botany as well as in the other required subjects.  Following the close of term of school in the spring of 1874 he decided to “go west.”  Arriving in northwest Kansas he at once homesteaded a farm in the Bow Creek Valley, near Stockton.  He lived on this farm for 55 years.  In 1929 he moved to the Fort Hays Kansas State College at Hays, Kansas, where he became the curator of the mycological Herbarium.  He held this position until the time of his death, November 18, 1934.

… the purchase of Gray’s Lessons in Botany in 1873 started hime in a line of work that gradually occupied more and more of his time until it became his life work.  Soon after his arrival in Kansas he began to collect, preserve and classify flowering plants.  By 1885 he had in his herbarium a specimen of every phanerogam [flowering plant] growing in that part of the state.  As head of a rapidly enlarging family and as a farmer he was very busy, but at every spare moment of the day and until late hours at night, he was always found iwth a book in his hand.  Without any assistance he acquainted himself not only with books on phanerogamic botany but with the Latin that was needed for his scientific work.  He tutored several students in the latter subject so that they could pass the entrance examination admitting them to the Kansas State Agricultural College.

One day in July, 1885, Dr. Bartholomew, like Cincinnatus of old, was plowing in his field when W. A. Kellerman, then professor of botany at the Kansas State Agricultural College, came to see him.  The two had never met but had corresponded much concerning phanerogamic matters.  After some time Dr. Kellerman stooped down, pulled a leaf from a weed, and straightening up said, “Bartholomew, why don’t you study something that is really interesting?  Look at this leaf.”  It was an Amaranthus leaf and was covered with white pustules (Albugo) on the lower surface.  Bartholomew did become interested and many times in later years as he developed his mycological herbarium, he was heard to remark:  “The plucking of that leaf by Professor Kellerman from a weed in my cornfield marked a turning point in my life.”

In 1901, Dr. Bartholomew became editor and publisher of Ellis and Everhart’s Fungi Columbiani, composed of specimens of North American fungi of all kinds.  He continued this publication until 1917, having published 36 centuries of this work during the years from 1901 to 1917.  In 1911 he began the publication of a new work called North American Uredinales.  This was somewhat similar to the preceding but included only the rust fungi of North America.  He published 35 centuries of this new work.  The publication of Fungi Columbiani and North American Uredinales entailed the identification, putting into packets, labeling, and indexing of 427,000 specimens.

On his collecting trips, which took him to every State in the Union, as well as into Canada and Mexico, Dr. Bartholomew personally collected 290,672 specimens which were later identified and appropriately cared for.  On his journeys he discovered approximately 470 species of fungi that were new to science…

Dr. Bartholomew had several invitations to become connected with colleges and universities, but he always refused until in 1929 when he became curator of the mycological herbarium a the Fort Hays Kansas State College.  He gave as his reason for refusal that he preferred to work in private on the farm which he homesteaded in the waning days of the buffalo and antelope; the farm where he had planted hundreds of shade and fruit trees.  Although he was reluctant to connect himself with one of the institutions of higher learning, he felt highly honored when in 1898 the Kansas State Agricultural College conferred upon him the honorary degree of Master of Science, and again in 1927 when the same institution conferred upon him the honorary degree of Doctor of Science.”