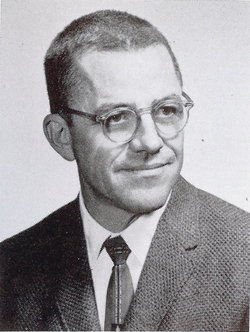 The University of North Carolina at Chapel Hill Herbarium (NCU) curates about 70 vascular plant specimens collected by Philip French-Carson Greear, though as we continue to catalog our holdings it is likely more will be found.  Most of Greear’s specimens curated by NCU were collected for his doctoral work on the vegetation of Bartow County, Georgia.  He usually used “Philip F-C. Greear” on herbarium labels.

A search in May, 2021 of herbarium portals devoted to algae, lichen and fungi revealed no specimens collected by Greear.

His obituary was printed in the Gainesville Times on 29 September, 2012:

Philip’s parents brought their family from Troutdale, Va. [Grayson County, Virginia], to White County, Ga. [Georgia], in the 1920s, when Philip was eight years old. He attended Nacoochee School through the eleventh grade, then finished high school at Young Harris Academy. He continued his college education at Young Harris College.

After college graduation, Greear joined the U.S. Army in 1942. He soon transferred into the newly formed U.S. Air Force, in Biloxi, Mississippi. There he met Mildred White, a young teacher who taught at Gulfport High School. They married on June 4, 1943. While Philip was in military training, they moved their residency to Helen, Georgia, to be near his parents.

Philip was stationed in Japan post World War II. Mildred and their three children, Carol, Delbert and Virginia Katherine (Missy) joined him there from 1951-1953. After returning to Helen, Philip taught school in White County and later attended the University of Georgia where he earned his Master’s degree in Plant Taxonomy and also, his Ph. D. in Biology with specialization in Botany.

Philip was appointed chairman of the department of biology and earth science at Shorter College in Rome, Ga., from 1962–1985. He rose to prominence nationally as an environmentalist having served on the Board of Directors for the Georgia Conservancy for a number of years as well as being on the Board of Directors for the Nature Conservancy. Greear was drawn to work toward preserving the environment because he had seen much devastation during World War II and because he grew up in the mountains of Northeast Georgia. He was a pioneer in using the Georgia Barrier Islands as an outdoor classroom for teaching Marine Biology and Environmental Science.

The Rev. Robert Prim will conduct a memorial service at Nacoochee Presbyterian Church, Sautee-Nacoochee, Ga., at 11 a.m. on Friday, Oct. 12. The SNCA community center, opposite the church, will be open for casual visiting before the memorial service. The memorial will conclude with dinner in the church reception hall.