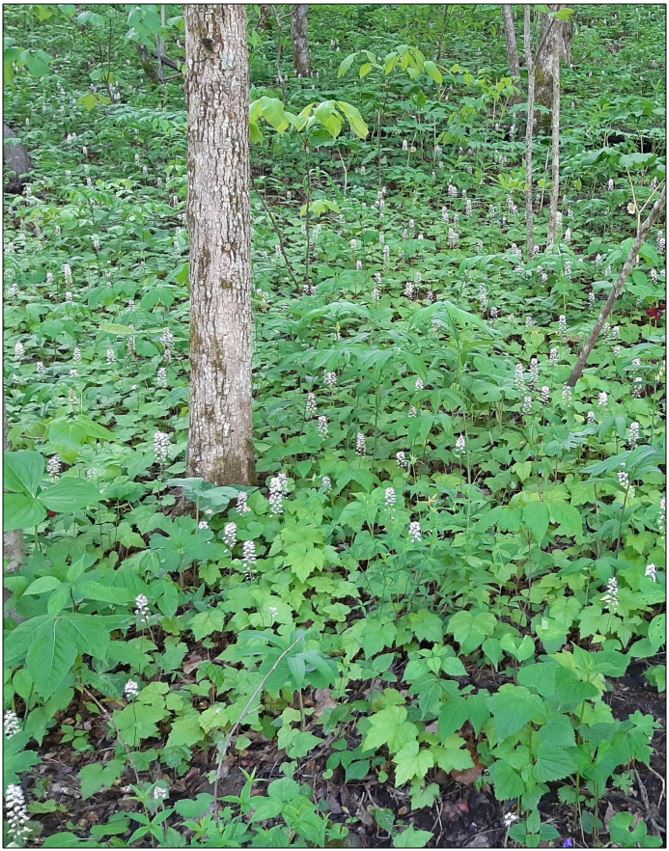 Lots of folks in the eastern United States know Tiarella when they see it and even feel at home using its Latin name, which means “little crown.” Others would call it “foamflower.” It’s easy to recognize and a beautiful plant growing in beautiful places. Perhaps fewer know that some Tiarellas produce stolons – prostrate stems, at the surface of the ground, that produce new plants from buds at their tips or nodes.1 Some might know that Tiarella has been divided into more than one species and more than one variety. Beyond that, though, understanding and agreement on its nature has not been at hand. For a botanist inclined to look more deeply, it’s astounding that such in-your-face opportunities for unraveling mysteries still exist.

Based on study of herbarium collections and foot-to-ground observations in 2021 in Alabama, Georgia, North Carolina, South Carolina, and Tennessee, I found that not one but five species of Tiarella are present in the eastern United States!2  The main features distinguishing them are presence/absence of stolons, shape of the basal leaves, and presence/absence of leaves on the flowering stem. When the plants are sorted by these physical characters, the five entities are remarkably consistent in geography, showing sharp boundaries with very little overlap (Figures 1, 2). Each of the five tiarellas fits the generally understood definition of “species” – a population system distinct in appearance from others and genetically discrete, forming few or no hybrids with other population systems.

A problem in understanding the taxonomy of Tiarella in the eastern United States has been ambiguous knowledge of stolon production – an herbarium specimen from a population of stoloniferous plants sometimes does not include stolons. Student collectors have often overlooked this feature and even experienced ones may miss it, thus in the herbarium, collections from one locality may show stolons while others appear to lack them. To stand among the plants at one site, though, it’s clear that all either do or do not produce stolons – field study was essential in determining the geography of the stolon/non-stolon forms. Technically, the Tiarella “stolons” are better referred to as “runners” – they are completely above-ground and usually easy to see. If there’s a lot of leaf litter, sometimes it might be necessary to push aside some of it to find where the runner(s) originate from the plant base.

I made two Tiarella trips in May 2021 to study plants in the ground, to examine populations for stolons, and to collect specimens to deposit in the University of North Carolina at Chapel Hill Herbarium (NCU) and other herbaria. My first trip in early May was solo; my daughter, Genevieve, joined me on the Tiarella trek in late May.

Carl Linnaeus (1707-1778) named the original species as Tiarella cordifolia in 1753, based on a collection by John Clayton in northeastern Virginia, where tiarellas do not produce stolons – the Linnaean name goes with these. John Clayton (b. 1694/5 – d. 1773) was born in England and moved to the colony of Virginia ca. 1715.3 Clayton was appointed Clerk of Court of Gloucester County in 1720 and held this position for most of his life.  He surely must have lived in the town of Gloucester, but he had property in the country on the Piankatank River (or creek) and the Poropotank River (or creek), whose headwaters are in close proximity. A map in the 1762 edition of Flora Virginica was drawn by Clayton to show geographical features and travel routes of his area in Virginia. All of the area is within the range of ‘non-stoloniferous’ Tiarella.

Among the non-stolon plants,  T. nautila (as a new species) produces small leaves on the flowering stem – use your nautical imagination to to see these little leaves as sails billowing just below the flowers. Tiarella wherryi  lacks these little sail-like leaves on the flowering stem. Wherry’s Foamflower was named in 1937 as a distinct species but since then has usually been considered a variety of T. cordifolia. I agree with the earlier botanists and consider it to be a good, distinct, full species.

The stolon-producing plants that occur in the Northeast and into New York. Michigan. and Canada had always been identified as T. cordifolia and never given a separate name – T. stolonifera (as a new species) seems appropriate for these.

The other stolon-producing entity had been named in 1937 by Olga Lakela (1890-1980) as T. cordifolia var. austrina. I have moved “austrina” from the status of variety to full species.

This key provides a brief way of identifying tiarellas in the eastern United States:

This spring if you are in the Southern Appalachians, I urge you to take a closer look at any foamflowers you see.  Note the presence / absence of leaves on the flowering stalks.  Get down on your knees, gently clear away the leaf litter and check for stolons.  You may discover that you’ve added a new Tiarella  to your plant list!