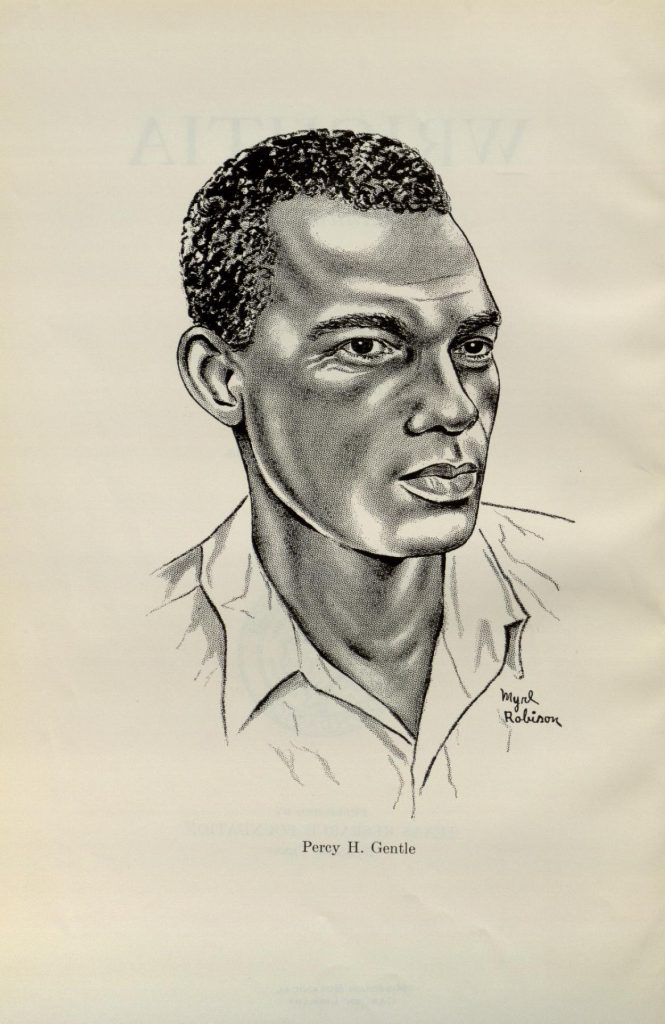 Gentle’s specimens are curated by herbaria across North America.  As Cyrus Longworth Lundell collaborated closely with Gentle, it is not surprising that the Lundell Herbarium (LL) and University of Texas Herbarium (TEX) in Austin, Texas curate over 1800 vascular plant specimens collected by Gentle.  Likewise, as Gentle was a close collaborator of Harley Harris Bartlett, the University of Michigan Herbarium (MICH) curates about 200 of his vascular plant specimens (and at least 23 fungal specimens and 23 bryophytes).  The Field Museum Herbarium (F) curates over 500 specimens collected by Gentle.  Other North American herbaria curating substantial numbers of Gentle’s specimens include Arizona State University (ASU; 154 specimens), Carnegie Museum of Natural History (CM; 166), Harvard Herbaria (HUH; 263), Purdue University (PUR; 7 fungal specimens), University of Arizona (ARIZ; 154), Missouri Botanical Garden (MO; 88 bryophytes), New York Botanical Garden (NY; 49 bryophytes) and the University of Wisconsin, Madison (WIS; 118).  Like NCU many of these herbaria continue to catalog their holdings, so it is possible that more specimens collected by Gentle will be found. 4  Due to confusion over “Honduras” and “British Honduras” many of Gentle’s specimens are mistakenly attributed to Honduras instead of Belize.13

“Percy H. Gentle was born in Belize, British Honduras [now Belize] on December 3, 1890 and died at Stann Creek [a district of Belize] on August 16, 1958.  Baptized Percival Hildebert Gentle, he was educated in local schools. In 1931 he accompanied Professor H. H. Bartlett on the botanical expedition of the University of Michigan – Carnegie Institution of Washington to Peten [Guatemala].14  Subsequently through 1932 he collected in the Colony for Professor Bartlett.  He was Dr. C. L. Lundell’s field assistant on expeditions to Peten and British Honduras in 1933 and 1936.  Also, in  1933 Mr. Gentle began work under Dr. Lundell’s sponsorship in British Honduras, and his botanical exploration was continuous thereafter until his death.  Covering a span of nearly twenty-six years, his series totals 9755, and he made as many as twenty specimens of each number.  The first set of his collection, for the period 1931-1943, is in the University of Michigan Herbarium [MICH].  The Lundell Herbarium [LL] contains the complete set from 1944 through 1958, and much of his earlier material as well.  His name is commemorated by the genus Gentlea  (Myrsinaceae), and by numerous species named for him.  Percy H. Gentle will go down in history as the first important botanical explorer of his race.”1

The University of Michigan Herbarium (MICH) curates wood samples collected by Gentle.  “Although the herbarium contains more than 180 of Gentle’s wood specimens, Bartlett recorded in his field notebook that many of Gentle’s specimens were “lost in the great Belize hurricane [of 1931].” Some of Gentle’s samples are accompanied by Mayan names or other ethnobotanical notes.”2

The 1931 British Honduras hurricane was the deadliest hurricane in the history of British Honduras (known as Belize since 1973).  [The storm reached] Category 4 hurricane intensity on 10 September.  The hurricane subsequently made landfall in Belize City with maximum sustained winds of 130 mph… Belize City was devastated, with the entire city being inundated by at least 5 feet of water.  Property on six street was completely swept away, while overall 70% of the city was destroyed.  Among the buildings severely damaged or demolished included many buildings and resident halls at St. John’s College and the U.S. Embassy building; the Consul suffered fatal injuries during the collapse of the building…. Within a 25 mi radius of Belize City and about 40 mi upstream the Belize River, all agricultural plantations were obliterated… The storm left approximately 2,500 deaths, making it the deadliest tropical cyclone in the history of Belize.”3

The Archives of the Gray Herbarium, Harvard University curates a two page list of plants collected in British Honduras by Gentle (with determinations by Standley).  The document is dated 1934 — in the early stages of Gentle’s collaboration with Bartlett, Lundell and Standley. 5  Meerman and Sabido note that “Gentle, a Belizean, collected from 1931 to 1958, amassing nearly 10,000 specimens, the largest number from different individual plants of any botanist in Belize.” 6

Oakes Ames credited Percy H. Gentle with finding a very rare Vanilla Orchid, Vanilla pfaviana Reichenbach filius.  “From 1889 (the year of Reichenbach’s death) until 1914, V. pfaviana remained an obscure species; its identity could not be established because the type was inaccessible being a part of the Reichenbachian Herbarium in Vienna and unapproachable by the terms of Reichenbach’s will during the twenty-five years following his decease.  In the original description, Reichenbach cited Mexico as the native country of V. pfaviana, saying that it was found by one of Mr. Pfau’s collectors, yet, what I take to be the type indicates Endres as the collector and Costa Rica as the source… Among the collections of orchids secured by numerous expeditions to Mexico since 1888, specimens referable to V. pfaviana failed to appear prior to 1933 when plants were collected in the vicinity of Atoyac near Vera Cruz; and, notwithstanding the intensive collections made in Costa Rica in recent years, nothing answering to the original description was discovered until 1936 when Alexander F. Skutch found specimens in the Province of San  Jose.  In 1935, Percy H. Gentle found specimens in British Honduras… BRITISH HONDURAS:  Gracie Rock, Sibun River, May 1, 1935.  Percy H. Gentle 1672.” 9

“[Gentle] devoted the latter half of his professional life to collecting herbarium specimens throughout the country [of Belize].  His collections were sent to the United States and from there distributed to herbaria throughout the world.  Our data sows that 153 specimens collected by him were described as new taxa… From 1931 until shortly before his death in 1958, Gentle collected 9756 numbers, easily making him the most prolific collector f the Belize flora… The quantity and quality of the specimens reflect the dedication of a resident botanist who traveled widely and was always attuned to species not previously encountered… Percival Gentle had a keen eye for plants he had not previously collected.  Based on collection data in our databases, we estimate he collected approximately 65% of the flora.  His numerous and well-executed specimens are a testament to his dedication and skill as a botanist and a legacy enriching our understanding of the Belize flora.”15

There are a plethora of plant species named in honor of Percy H. Gentle.

It would be interesting to know if any specimens collected by Gentle remain in Belize.  According to Goodwin and Cayetano,  the Belize National

Herbarium (BRH) was established in 1928 and resided in the Paslow Building in Belize City.  In 1996 BRH moved to the capital city of Belmopan “due to fire”.  With the support of the Belize Forest Department and the University of Belize Environmental Research Institute, BRH hopes to re-invigorate the herbarium as a resource for teaching, research and conservation.12